A rift in the Antarctic rock as deep as the Grand Canyon is increasing ice melt from the continent, researchers say.

A UK team found the Ferrigno rift using ice-penetrating radar, and showed it to be about 1.5km (1 mile) deep.

Antarctica is home to a geological rift system where new crust is being formed, meaning the eastern and western halves of the continent are slowly separating.

The team writes in Nature journal that the canyon is bringing more warm sea water to the ice sheet, hastening melt.

The Ferrigno rift lies close to the Pine Island Glacier where Nasa scientists found a giant crack last year; but the newly discovered feature is not thought to be influencing the "Pig", as it is known.

The rift lies beneath the Ferrigno Ice Stream on a stretch of coast so remote that it has only been visited once previously.

The plan was to make ground observations that could link to the satellite data showing unexpectedly pronounced ice loss from the area.

The team towed ice-penetrating radar kit behind a snowmobile, traversing a total of about 2,500km (1,500 miles).

"What we found is that lying beneath the ice there is a large valley, parts of which are approximately a mile deeper than the surrounding landscape," said Dr Bingham.

"If you stripped away all of the ice here today, you'd see a feature every bit as dramatic as the huge rift valleys you see in Africa and in size as significant as the [US] Grand Canyon.

"This is at odds with the flat ice surface that we were driving across - without these measurements we would never have known it was there."

The Ferrigno rift extends into a seabed trough, called Belgica.

The scientists suggest that during Ice Ages, when sea levels were much lower than at present, the rift would have channelled a major ice stream through the trough.

Now, they suggest, the roles are reversed, with the walls of the Belgica trough channelling relatively warm sea water back to the ice edge.

Penetrating between the Antarctic bedrock and the ice that lies on it and lubricating the join, the water allows ice to flow faster into the sea.

"We know that the ice loss from the West Antarctic Ice Sheet is governed by delivery of warm water, and that the warm water is coming along channels that were previously scoured by glaciers," said Prof David Vaughan of BAS.

"So the geology and the present rate of ice loss are intricately linked, and they feed back - if you have fast-flowing ice, that delivers ice to the edge where it can be impacted by warm water, and warm water makes the ice flow faster," he told BBC News.

Prof Vaughan doubted there would be more such features around the West Antarctic coast, though in the remoter still regions of the east, it was a possibility.

Ice loss from West Antarctica is believed to contribute about 10% to global sea level rise.

But how the West Antarctic and Greenland ice sheets respond to warmer temperatures is the biggest unknown by far in trying to predict how fast the waters will rise over the coming century and beyond.

A total melt of either sheet would raise sea levels globally by several metres.

East Antarctica, by contrast, is so cold that the ice is projected to remain solid for centuries.

"Since the last Intergovernmental Panel on Climate Change report [in 2007], which highlighted uncertainties connected with ice sheets, almost every significant piece of research we've produced has increased the significance of the ocean for West Antarctica and Greenland," said Prof Vaughan.

"There are changes in precipitation now and in future; but the really big, potentially fast, changes are connected to the oceans, and the goal for us is to model that system." 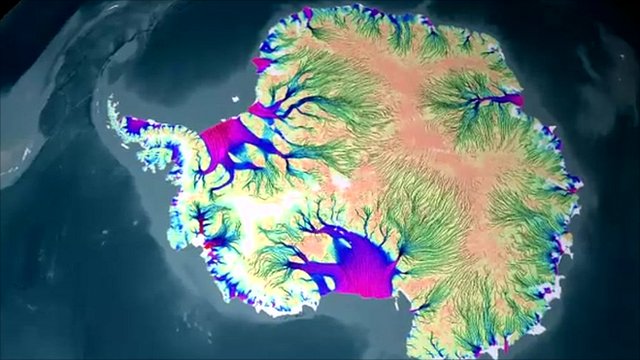 A team of scientists has created the most complete map of ice motion over the entire continent of Antarctica. Built from images acquired by radar satellites, the visualisation details all the great glaciers and the smaller ice streams that feed them.

The explosion has caused widespread damage, with hospitals struggling to treat all the casualties.

Seven reasons not to give up on poetry

How is furlough changing?