The E-Merlin telescope has proven its capabilities with a striking image of a quasar nine billion light-years away.

E-Merlin is an array of seven linked UK radio telescopes, updated last year with fibre optic technology that has vastly increased its power.

Light from the Double Quasar has been bent by a massive object between it and the Earth, resulting in a double image.

This gravitational lensing is a powerful demonstration of one aspect of Einstein's theory of relativity.

The quasar - short for quasi-stellar radio source - sprays out tremendous amounts of energy and matter, powered by a super-massive black hole at its heart.

The E-Merlin image shows how gravitational lensing can produce multiple images of the quasar. Visible at the top is a rich picture of the quasar and the jet of radio waves coming out of it at near light-speeds.

Below that is a duplicate image of the quasar; just above it is the fainter image of the nearer galaxy that does the lensing. A look inside a giant telescope 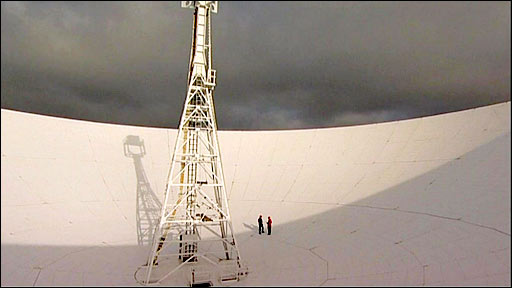 Array moves on from microwaves 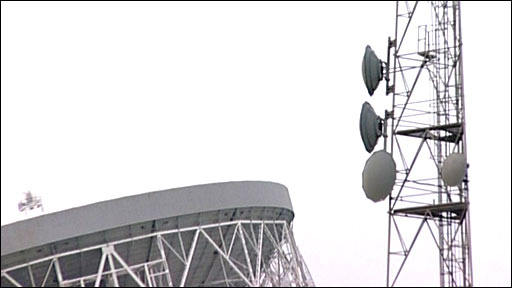 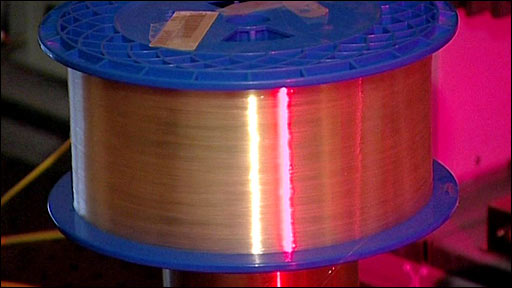 Astrophysicist Tim O'Brien explains why linking up seven telescopes with optical fibres will make a huge difference to astronomers. 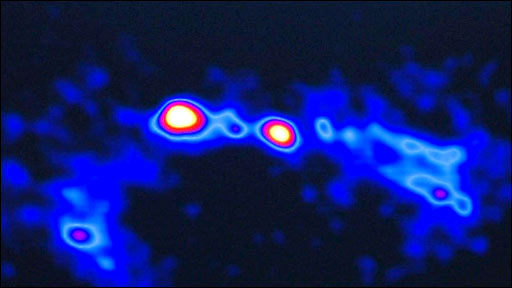 Tim O'Brien explains how the e-Merlin array will let astronomers see part of the cosmos they have never seen before.

The image demonstrates how the 2009 data-link upgrade for the array of telescopes, run from the Jodrell Bank observatory in Cheshire, has improved its vision.

Previously, the seven telescopes passed data to one another through antennas operating in the microwave region. It was a slow and lossy process that fibre-optic links have now replaced, with promising results.

"E-Merlin is going to be a transformational telescope," said Mike Garrett, director of the Netherlands Institute for Radio Astronomy. "Astronomers around the world can't wait to get their hands on it.

"As a pathfinder for the next-generation international radio telescope, the Square Kilometre Array, E-Merlin represents another giant leap forward for the global radio astronomy community."

How a boy from Vietnam became a UK cannabis farm slave

The haaf netters fighting to save a fishing tradition

Would George Orwell have had a smartphone?