The meeting the world's been waiting for

The president of the United States meeting North Korea's leader will be, diplomatically speaking, A Huge Deal.

What will the two men be talking about?
Will their meeting make the world a safer place?
What impact will it have on the lives of North Koreans?
Will it mean Mr Trump and Mr Kim get a Nobel Peace Prize?
And what has ice-skating got to do with it?

Why all the fuss?

This is about the leaders of two countries with nuclear weapons saying they want to try to patch things up. Until recently they were threatening to fire these weapons on each other.

North Korea has been a pariah state for decades, because of its relentless pursuit of nuclear weapons and its shocking human rights record.

North Korean leaders have always thought a face-to-face meeting with a US president would mean they were finally being taken seriously.

But the US - and most other countries - have long refused to engage with North Korea unless it mended its ways.

That all changed earlier this year when Donald Trump responded to an apparent olive branch from Kim Jong-un by saying he'd love to chat.

So this meeting could change the course of history.

Why do the US and North Korea hate each other so much?

It's complicated, but basically they are political opposites who see each other as an existential threat.

America is a wealthy capitalist democracy. North Korea is an impoverished one-party, totalitarian state, born of the chaos of World War Two which divided the Korean peninsula.

They fought a war in the 1950s, when the North invaded South Korea and the US moved in to back the South. 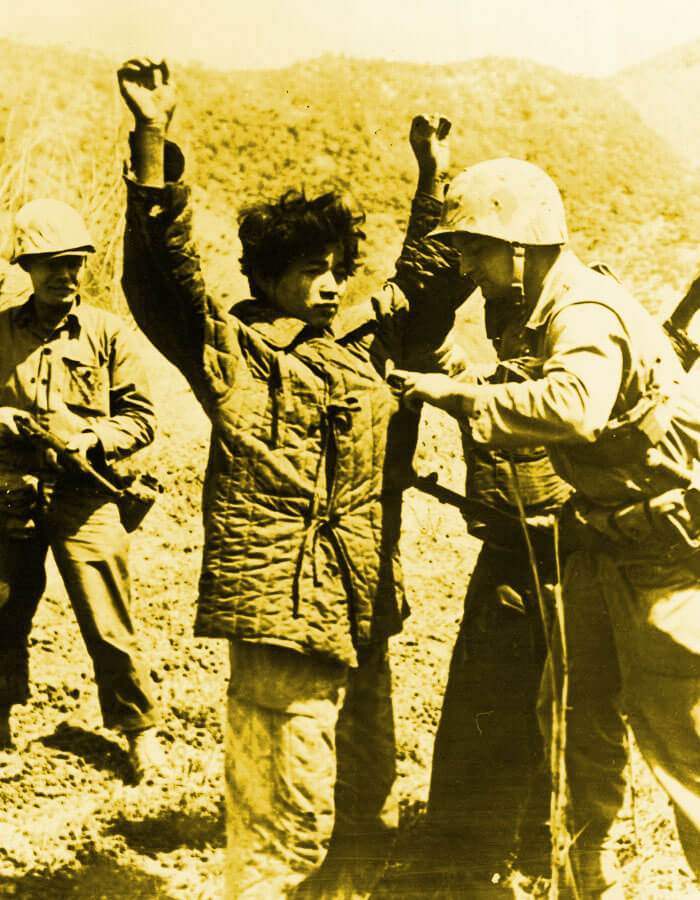 That war has never been formally ended, just put on hold with a truce. So North and South Korea are, technically, at war.

North Korea developed as an isolationist, one-party state and its leaders decided it needed a full nuclear weapons programme if it was to survive.

Here's how that nuclear programme has developed:

North Korea starts developing nuclear technology with the support of the Soviet Union.

North Korea pulls out of the Non-Proliferation Treaty.
It is believed to be developing nuclear weapons.
In 2005, North Korea reaches an agreement to give up its nuclear weapons programme in exchange for aid.
But that quickly collapses.

In January, North Korea claims to have tested a miniaturised hydrogen bomb - but it is never confirmed.

North Korea tests increasingly powerful missiles including one it says could reach the US mainland.

In September, it conducts its sixth nuclear test - it says it was a hydrogen bomb that could be mounted on a missile.

All this means North Korea has faced global condemnation and ever-increasing sanctions. They're intended to punish it economically and force it to change course.

Why such concern over North Korea having nuclear weapons?

Because the world has - with notable exceptions - agreed that there should be no new nuclear states and that the existing ones will not use theirs.

North Korea in particular is widely considered not to be responsible enough to have nuclear weapons - after all, it does keep threatening to use them. Its nuclear programme has always been worryingly secretive, and there is real fear that if the government collapsed, the nukes could fall into the wrong hands.

Will Trump and Kim get on?

For a long time, from afar, they have not.

Both leaders are notoriously unpredictable, volatile, nationalistic and prone to angry outbursts.

Here's a selection of insults they, or their representatives, have hurled at each other over the past year or so.

"North Korea best not make any
more threats to the United States.
They will be met with fire and fury
like the world has never seen."

- Trump (August 2017)
"Sound dialogue is not possible
with such a guy bereft of
reason and only absolute
force can work on him."

- General Kim Rak-gyom
(August 2017)
"Rocket Man is on a suicide
mission for himself and for
his regime."

- Trump (September 2017)
"A frightened dog barks louder...
I will surely and definitely tame
the mentally deranged US
dotard with fire."

- Kim (September 2017)
"Kim Jong-un of North Korea, who
is obviously a madman who doesn't
mind starving or killing his people,
will be tested like never before."

- Trump (September 2017)
"Reckless remarks by an old
lunatic like Trump will never
scare us or stop our advance."

How did ice skating change the world?

On 1 January, completely out of the blue, Mr Kim said he was up for talking to South Korea.

His starting point? He wanted to send a team, including ice skaters, to compete in the Winter Olympics in Pyeongchang, South Korea. 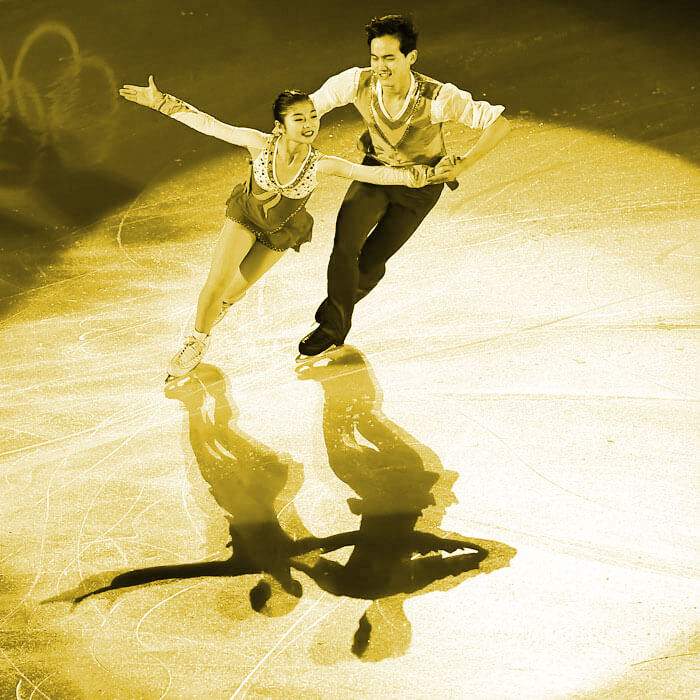 After much talking, North and South Korea took part in the Winter Olympics in February as a single team.

Then in March, some senior South Korean officials took a message from Mr Kim to the US - he wanted to meet Mr Trump, was halting all nuclear and missile testing and was "committed to denuclearisation".

Mr Trump accepted immediately - overturning decades of US policy - and plans began to make it happen.

In early May, the date was set as 12 June and then the location, Singapore.

As a gesture of goodwill, North Korea released three Americans it had in prison.

It also blew up the site where it has carried out its six underground nuclear tests. Though that doesn't guarantee its tests are over forever.

Didn't we just have a historic summit?

Yes, that was between North and South Korea.

In April, South Korea's President Moon Jae-in travelled the short distance from Seoul to the DMZ - that's the heavily guarded Demilitarised Zone which has divided North and South Korea since the war came to a halt in 1953. (Remember, the war has never officially ended.)

Jaws dropped around the world as the two leaders walked up to the border, shook hands and each in turn stepped to the other's side. 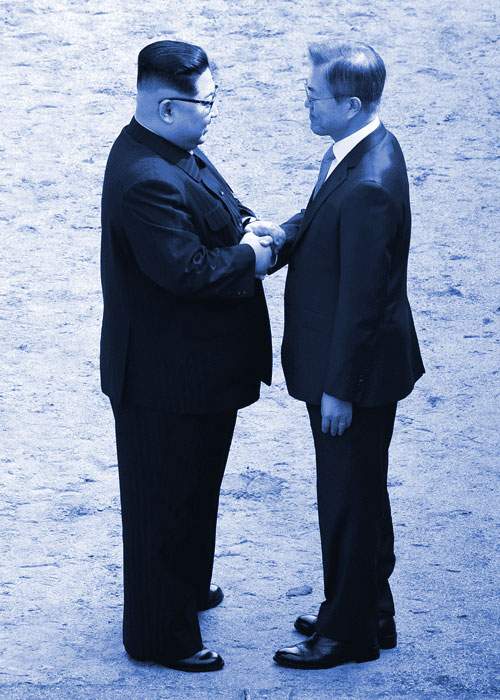 An extraordinary day played out as the leaders talked, dined together and took a scenic intimate stroll around the border region. 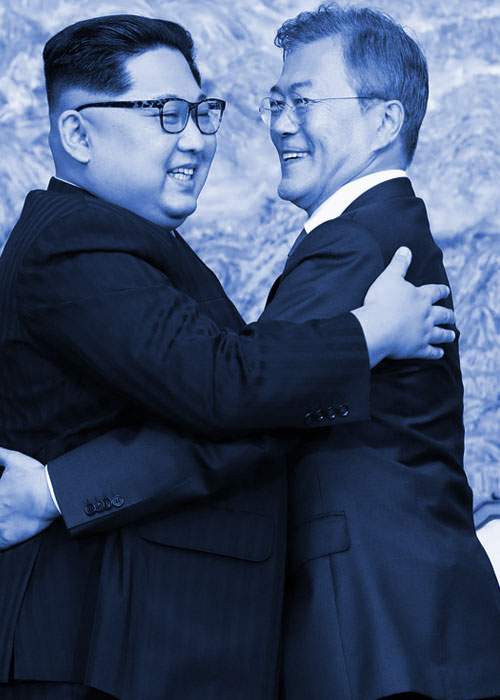 At the end of the day they issued the Panmunjom Declaration, promising to:

- Keep talking, even about eventual unification.
- "Cease all hostile acts" against each other.
- Declare a formal end to the Korean War and aim for "complete denuclearisation of the Korean peninsula".

They met again in May, for more talking... And more hugging. 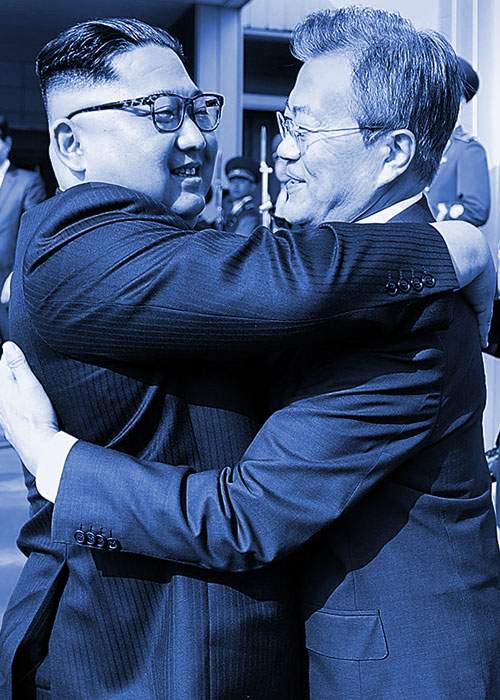 So North Korea has promised to give up its nuclear weapons?

No. Because what each party means by "complete denuclearisation" of the Korean peninsula remains unclear.

For the US, it has historically meant North Korea committing to giving up or destroying all its nuclear weapons. Only then can things move forward.

For North Korea, it's more nuanced. It is unlikely to give up its nuclear weapons without a guarantee of its safety.

That means if it denuclearises, it wants everyone else on the peninsula to disarm too.

That includes the US, which has a military pact to defend South Korea.

But wait, didn't Trump call off the summit?

He did, for a day or so. It all briefly looked like it would fall apart because US officials kept bringing up Libya as a possible model for North Korea.

That alarms Pyongyang. In 2003, Libya's Col Muammar Gaddafi agreed to give up his nuclear weapons programme in exchange for lifted sanctions. But he went on to be killed a few years later in an uprising backed by Western powers.

Here's how the summit spat played out:

North Korea threatens to cancel if the US "unilaterally demands we give up nuclear weapons". 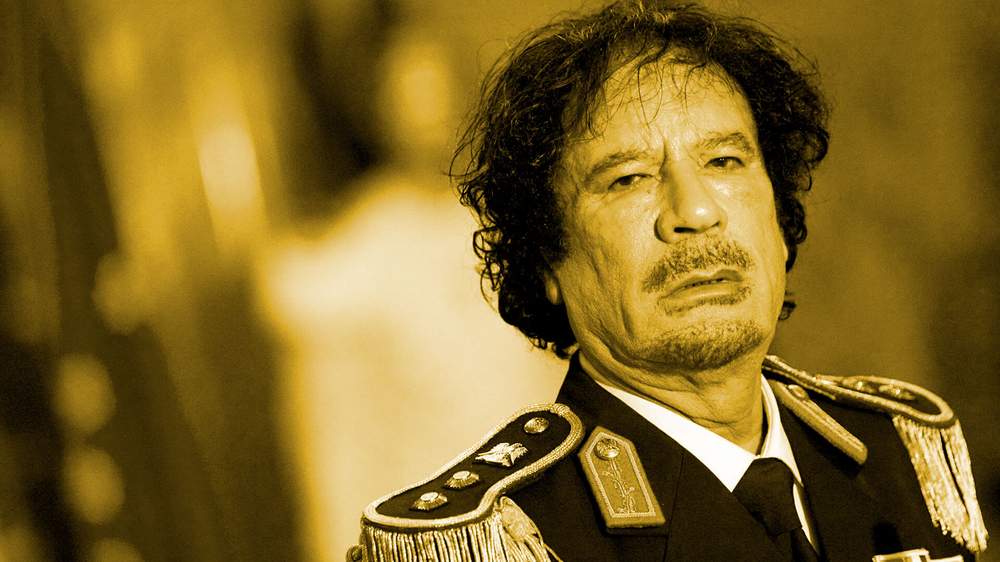 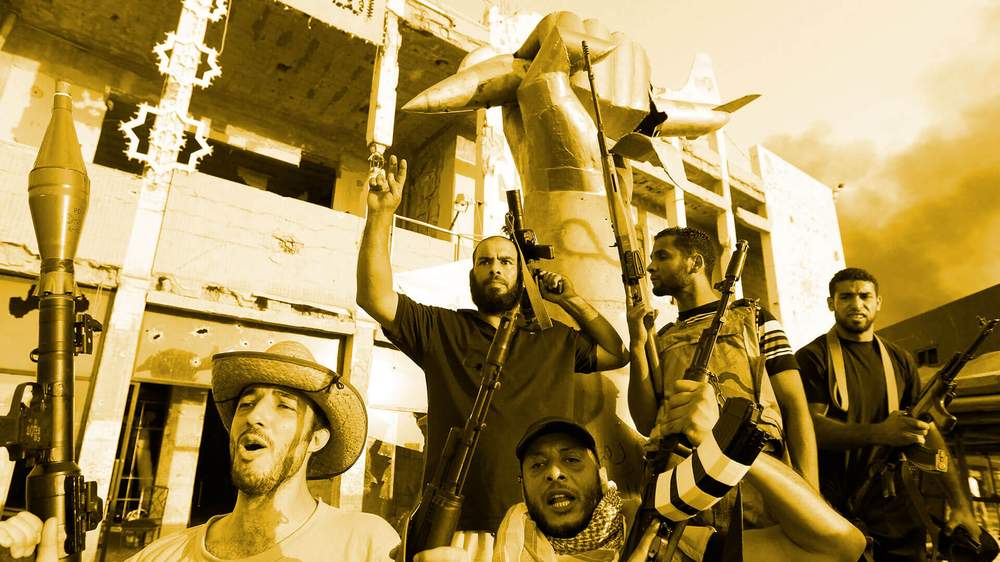 But plans were only briefly derailed. Mr Kim's right hand man visited Mr Trump to hand deliver a truly huge letter, and it was all back on. 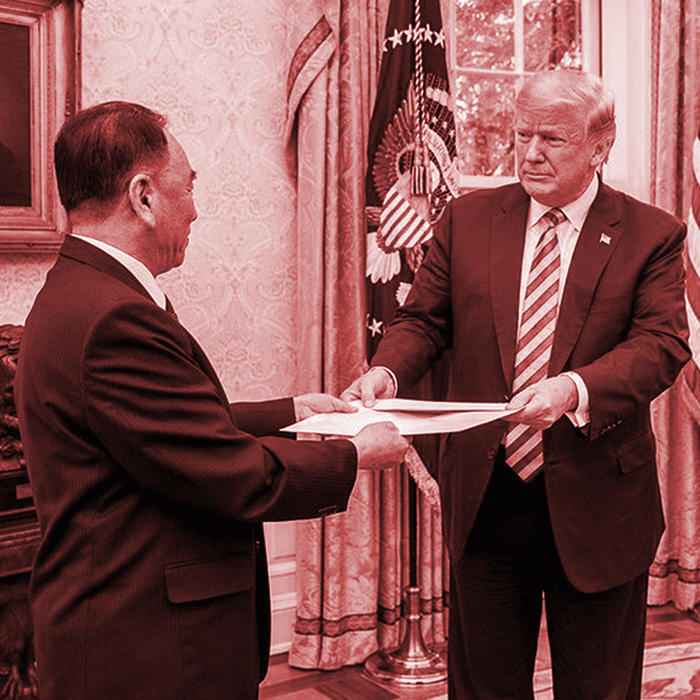 It's safe, neutral, secure and has a good relationship with both America and North Korea. North Korea has an embassy in Singapore - it doesn't in a lot of countries - and has for a long time done business through Singapore.

Protests are also pretty much banned in Singapore, so they won't need to worry about that.

And what are they hoping to achieve?

Frankly, it's not yet clear.

It's expected they'll talk about denuclearisation - whatever that means - scaling down tensions on the Korean peninsula, and well, world peace.

But Mr Trump has recently toned down his insistence on complete, verifiable, irreversible dismantlement (CVID) of North Korea’s nuclear programme. He has indicated he might accept a phasing out of the programme, in exchange for a review of sanctions.

Mr Kim wants to be able to show the world - and North Koreans - that the US is taking him seriously. He will certainly want an easing of sanctions, but Pyongyang has insisted it won't be "blackmailed" by offers of aid.

It's worth remembering, North Korea has agreed to all of this before, only to abandon those agreements.

Both men place great importance on personal connections. It could be that a day of friendly conversation at a beachside Singaporean hotel is enough to break the deadlock for now and get the peace process moving.

What will almost certainly NOT be talked about is North Korea's human rights record.

Does anyone else get a say in this?

They might not get a say in the deal, but a lot of leaders are making sure their voice is heard by both Mr Trump and Mr Kim.

We know that South Korea played a crucial hand in making this all happen. President Moon Jae-in essentially played matchmaker for Mr Trump and Mr Kim.

But when Kim Jong-un made a surprise visit to China in March, it was a message that China was still a major player in the game.

It was the first time Mr Kim had left North Korea since becoming leader and President Xi Jinping was the first foreign leader he met.

Any deal with the US is likely to need China's quiet support.

Japanese Prime Minister Shinzo Abe has met Mr Trump several times to push some of Tokyo's points onto the agenda, most importantly the release of Japanese citizens abducted by the North.

Russia, a neighbour and old ally of Pyongyang's, has condemned nuclear tests but criticised sanctions too. It now looks likely that Mr Kim has a meeting scheduled with Russia's President Vladimir Putin too.

And, most unexpectedly, Syria's President Bashar al-Assad - another of the world's most isolated leaders - has said he plans to visit Mr Kim in North Korea, according to Pyongyang. 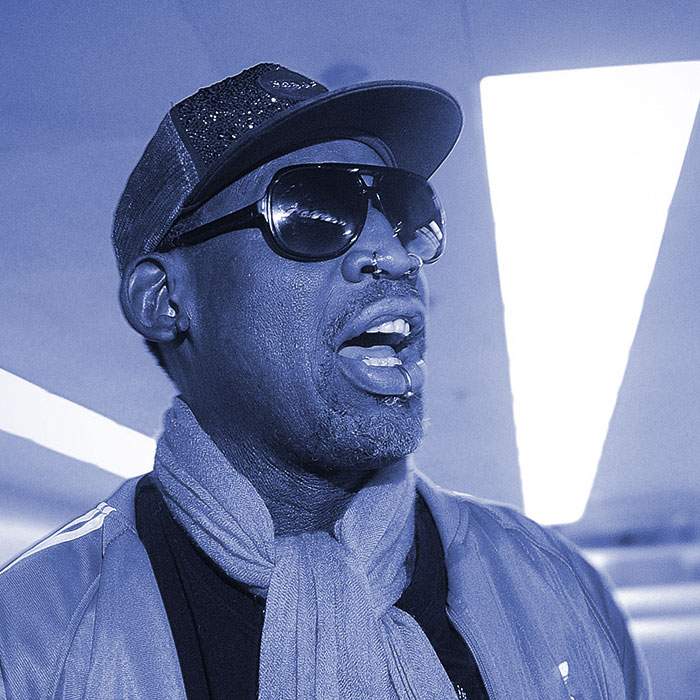 Oh, and Mr Kim's friend Dennis Rodman - US basketball celebrity and repeat visitor to North Korea - might even make an appearance in Singapore.

Is there a Nobel Prize in it?

Mr Trump says people think he deserves one. After all, his predecessor Barack Obama got one even before his presidency got under way.

And there is a strong argument - if the leaders manage to leave behind their personal feud and decades of political antagonism and achieve genuine lasting peace, it will be extraordinary.

It's safe to say, though, there would be few more divisive nominees than Kim Jong-un and Donald Trump. 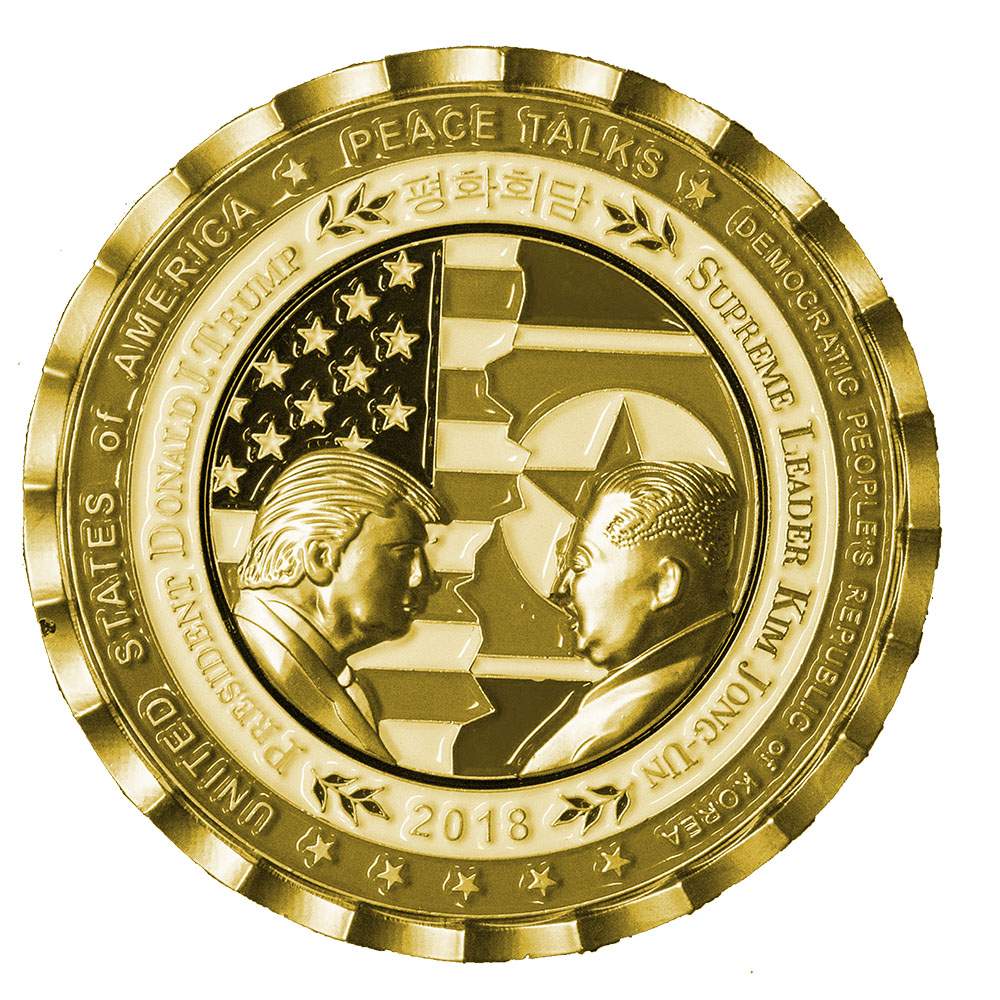