Three cities in darkness and light

What does the impact of the Syrian war look like from space?

Six years of war in Syria have had a devastating effect on millions of its people.

One of the most catastrophic impacts has been on the country’s electricity network.

Images from Nasa, obtained by BBC Arabic, show clearly how the lights have gone out during the course of the conflict, leaving people to survive with little to no power.

Each timelapse frame shows an average of the light emitted at night every month from 2012, one year after the war began.
They show that the areas where Syrians can turn lights on at night, power their daily lives and get access to life-saving medical equipment, have shrunk dramatically.

The city of Aleppo was Syria’s powerhouse and home to over two million people.

But the country's industrial hub became a battleground and remained so for more than four years. Russian airstrikes against Syrian rebels began in October 2015 and the timelapse shows the city in almost complete darkness at night throughout 2016, when the battle for Aleppo was at its peak.

As mains power supplies dropped off, ordinary people had to be creative in finding alternative sources for light and power. Fayrouz and Wallid made candles from cooking oil…

“Living with little electricity was very hard”, says Wallid. “We broke things in our house to burn them as fuel. We only washed every 10 to 15 days. We couldn’t put anything in the fridge, so we bought food and ate it straight away. We lived life day to day.”

Aleppo’s nearest power plant is still heavily damaged after being fought over by different warring groups. It was controlled by the Free Syrian Army in 2013, so-called Islamic State in 2014 and was taken back by government forces in late 2016.

As Syrian government forces besieged the city’s rebel-held eastern districts in 2016, a lack of electricity became a matter of life or death.

Aleppo’s hospitals and emergency rescue teams had to rely on generators to save lives, and there were often shortages of fuel and spare parts.

Although most of Damascus is government-controlled, electricity is sporadic for everyone, and sometimes non-existent in rebel-held areas. 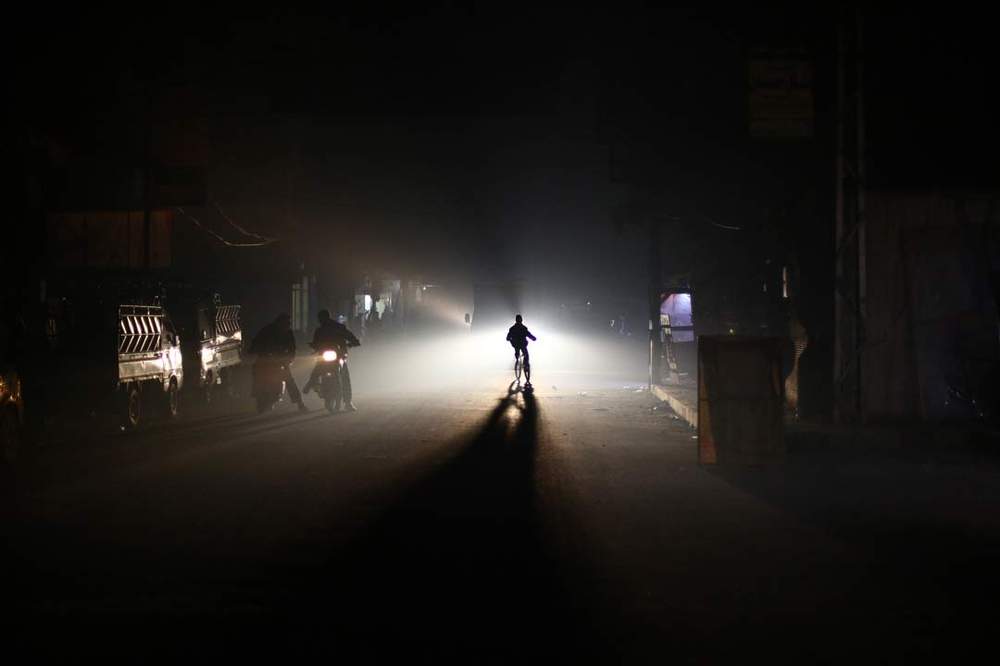 Residents of the besieged rebel town of Douma, Damascus, ride through the street at night during an electricity shortage, on January 19, 2015. AFP/GETTY IMAGES: ABD DOUMANY

Syria was once one of the eastern Mediterranean's major power suppliers. It has 15 power stations, including three major hydroelectric dams.

Each feed electricity into multiple substations that distribute power across the national grid.

The Syrian Ministry of Electricity told us that $5 billion worth of electricity infrastructure has been damaged or destroyed by the war.

The sale of generators, car batteries and LED lights is booming. The streets of Damascus echo with the sounds of diesel generators.

In rebel-held Eastern Ghouta, besieged by government forces and hit by a chemical attack in 2013, some residents have survived without mains electricity since the middle of that year.

One media activist there said, “the feeling of being in the dark is very frightening, especially when we are bombed, and the women and children start crying.”

IS took control of Raqqa in late 2013. The timelapse shows the city in almost complete darkness for three months, after US-led coalition airstrikes against IS began at the end of September 2014.

Tabqa, which lies around 40km west of Raqqa, is home to Syria's largest dam. After weeks of fighting, the town has now been taken over from IS by the Syrian Democratic Forces.

The military operation by the SDF has created a major strategic position in the lead-up to the assault on Raqqa, the de facto capital of IS in Syria.

How power became a pawn in the Syrian conflict

Electricity, like other commodities, has been used by the warring sides to exert pressure on opponents. Across Syria, people survive with little to no power, with a knock-on effect on other basics like water supplies.

Last year, the International Committee of the Red Cross said that civilians in the city of Aleppo were undergoing enormous suffering because of deliberate cuts to water and electricity supplies, used by each of the opposing parties to pressure the other.

The Syrian government says that damage to the country’s seven major gas fields during the conflict means that they have to buy and distribute fuel at higher prices, leading to shortages and rationing.

It says that power rationing is dependent on the “security circumstances.” It has blamed the need to ration supplies on militants’ attacks of gas pipelines, power plants and electricity transmission towers.

But rebels say that government bombing of power stations, and deliberate cuts to rebel-controlled areas, are the reasons for power outages.

In northern Idlib province, which is controlled by opposition forces, residents told the BBC that they had had no mains electricity for five years. Before it stopped completely, they said, it was rationed. They believe that this was one way by which the government punished people living in rebel territory.