The landscape of Nepal is a geographical staircase, descending from snow-capped Himalayan mountains, through steep middle hills, to the lush flat plains of the south.

In the middle step, in the remote far west of the country, life has changed little over the decades.

For 18-year-old Ishwari Joshi, this means doing as her mother and grandmother did before her and leaving her home when she has her period.

The practice is called “chhaupadi” - a name for menstruation which also conveys the meaning that a woman is unclean when she is bleeding.

Cattle sleep on the ground floor, families on the middle, while the top floor is used for cooking.

When a woman starts her period, she has to leave this warmth for the seclusion of a specially built hut.

These are tiny spaces, shared by several families, without proper beds or bedding.

When the women are isolated here, they can't cook, eat nutritious food, drink from or bathe in the village water source.

They are forbidden from touching plants, cattle or men.

“It is said that if we touch a cow, they will not give milk,” says Ishwari's friend Nirmala.

“We've never seen anything like that happen, but our elders say we must not touch the cows.” 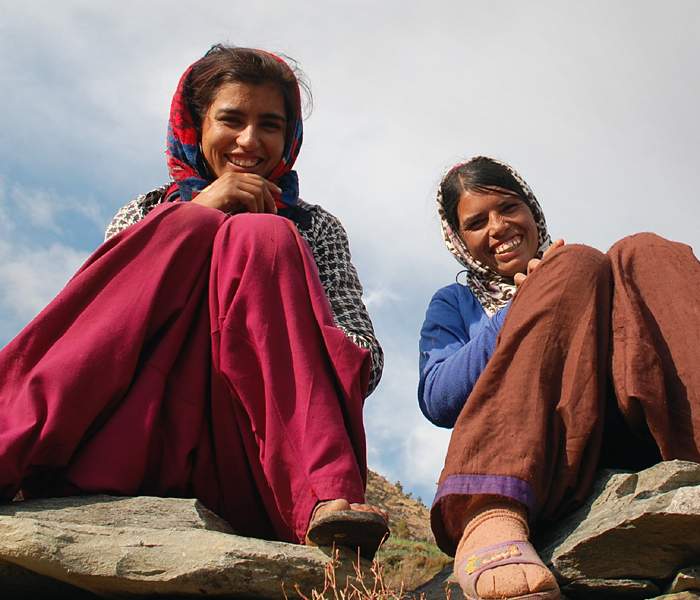 Kalpana Joshi, 45, is resigned to her monthly stays in her “chhau” hut, a room little bigger than a crawl space beneath her village shop.

“Nothing will happen,” she says, reassuring the younger women who fear attacks by animals and drunk men.

A few metres away is the village toilet Kalpana helped build as part of a government drive to stop open defecation. It's out of bounds to her because it's believed she will pollute the water supply.

“We're not allowed to touch the toilet because it's the same water we use at home,” she says.

“We have to go to the fields far away from the house where nobody can see us.”

After four days in the hut, the village women bathe in a stream an hour's walk away and are “purified” with cow urine.

Only then can they return to normal life. 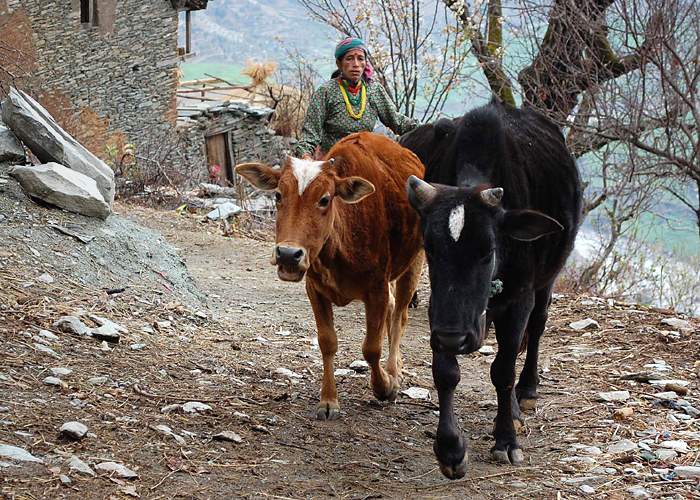 They say chhaupadi is not enforced as strictly as it used to be, telling stories of mothers and grandmothers who were exiled during their monthly bleed.

But even this more relaxed interpretation of chhaupadi is too much for some.

“My parents got angry, but my brothers understood so they don't mind if I stay at their house,” she says. 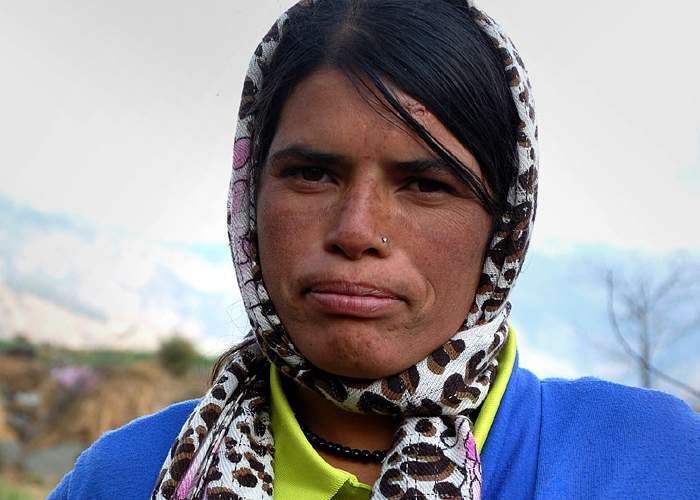 Laxmi knows her protest is unlikely to continue when she marries and moves into her husband's household, as is the tradition in Nepal.

“If the family insists I have to sleep outside, I will have no choice,” she says.

'Menstrual blood is a poison'

In the evening twilight, the men in Dhamilekh chat by a fire in front of the village store.

There's talk of the new road that reaches the village - a precarious, narrow rock path prone to landslides during the monsoon.

The road was built to bring prosperity. But instead it has meant that village men can no longer earn a living carrying goods on their backs, forcing them to India and the Gulf states to work as migrant labourers.

With so many men away, the women are needed more than ever to tend to the cattle and bring in the harvest.

But the men still believe in the necessity, and power, of chhaupadi.

“I used to get sick if my wife touched me during her period - of course I did,” says 74-year-old Shankar Joshi.

A younger man, Yagya, also thinks the tradition should continue, but for different reasons. 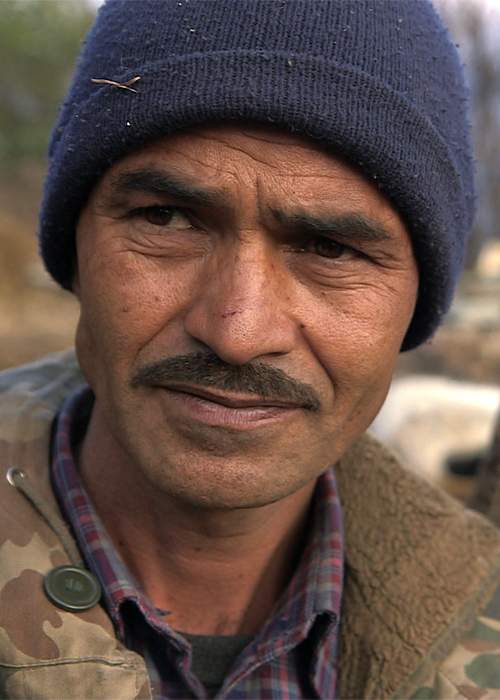 “In the old days, people might have said the gods get angry and that's why the practice was followed,” he says.

“But I believe it's more about keeping a clean environment and health and safety in the house,” he says, noting that village women only have cloth rags to soak up their flow.

“Menstrual blood is a poison,” he says.

No-one can pinpoint exactly where the idea that periods are unclean comes from, but it is often attributed to Hindu scriptures.

The villagers of Dhamilekh, like 80% of Nepal's population, are Hindus.

They look for guidance to priests like Narayan Prasad Pokharel, who sees menstruation as sacred, but also dangerous. 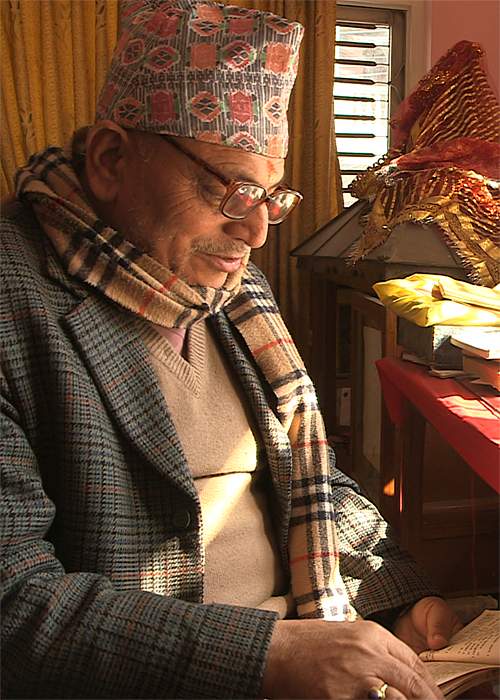 “If the woman does not restrict herself, then the impurities that have been in her body could transfer to the man during sexual intercourse. That will result in terrible diseases,” he says.

There is even an annual religious ceremony for women to atone for accidentally touching a man, or polluting their environment.

During Rishi Panchami, women fast and bathe in sacred water.

Chhaupadi may have its roots in religious scriptures, but it's become a widespread social practice. 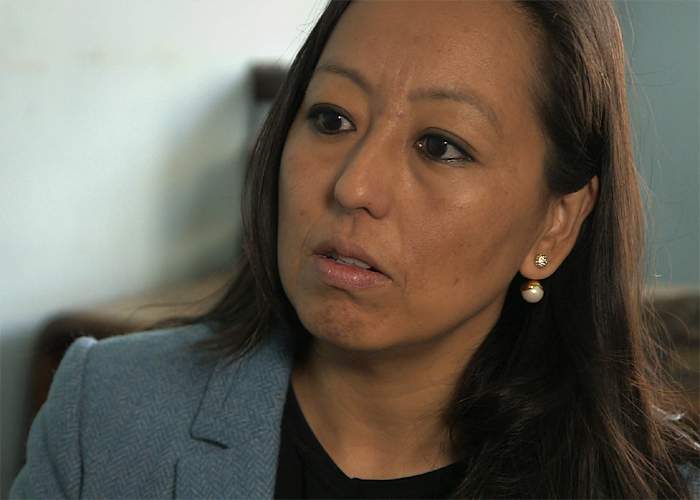 “So we've had incidences where even Buddhists are doing it because everyone else is,” she says.

In 2005, the Nepalese Supreme Court outlawed the practice of chhaupadi. But, especially in the remote far west of the country, traditions are slow to change.

And it's not just the men who think women should remain isolated during their periods.

“You have to engage with the mothers-in-law,” says Pema Lhaki.

“It's a power dynamic. They make sure their daughters-in-law do it because they had to do it.”

Hundreds of miles to the east of Dhamilekh's steep hillsides is Nepal's crowded capital, Kathmandu.

But the taboos surrounding periods have not completely disappeared.

Nirmala Limbu and Divya Shrestha are recent graduates in their early 20s. 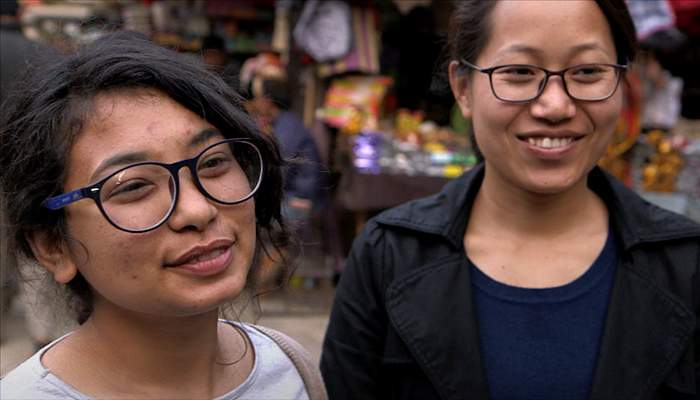 “The rules didn't make sense to me growing up. My mother told me I was not allowed to touch plants, especially fruit trees,” says Nirmala.

“I used to keep on touching those plants - none of them died,” she says.

For Divya, getting her period meant being banned from attending a religious festival.

“I had prepared everything for worship and had worked all day and suddenly I had my period and everyone said we had to purify everything I had touched,” she says.

“It was really sad for me as a young girl. Why should I be called impure. It's a natural thing that every woman goes through.”

Nepalese society is changing. Although Nirmala and Divya faced some restrictions, they were mild compared with those endured by their mothers.

“When we had our periods, people seemed disgusted by us,” says Divya's mother Sudha.

“They would keep us apart. We had to use separate plates, wear different clothes. Nobody could touch us,” she says.

When Sudha gave birth to Divya, she decided that she could not put her own daughter through the same humiliation.

“Even though my family were angry with me, I didn't listen to them. It was my decision,” she says.

Because of her mother's determination, Divya grew up largely without restrictions, believing she could live life normally during her period.

“It's built up my confidence,” says Divya.

“I've got a better education because of it - I have a better position in society.”

In Nepal there are now many girls like Divya who are not held back by taboos surrounding periods.

But Pema Lhaki, who runs a programme on reproductive health, says that even in the city, old attitudes can be hard to shift.

“I feel the biggest danger comes from educated women,” she says.

“It's the woman I can meet at a party in Kathmandu who tells me she doesn't go into the kitchen when she's menstruating.

“These are the women who are indirectly perpetuating all of this.”

In the grasslands of southern Nepal, health worker Laxmi Malla is mounting a small, but determined, campaign to bring an end to chhaupadi.

On the plains - known as the Terai - the huts that women must sleep in during their periods are open-sided, with roofs made of straw.

It's not unusual to see three or four women sleeping in one small hut, using old clothing for bedding. There's no protection from monsoon rain, or the snakes that inhabit the long grass. 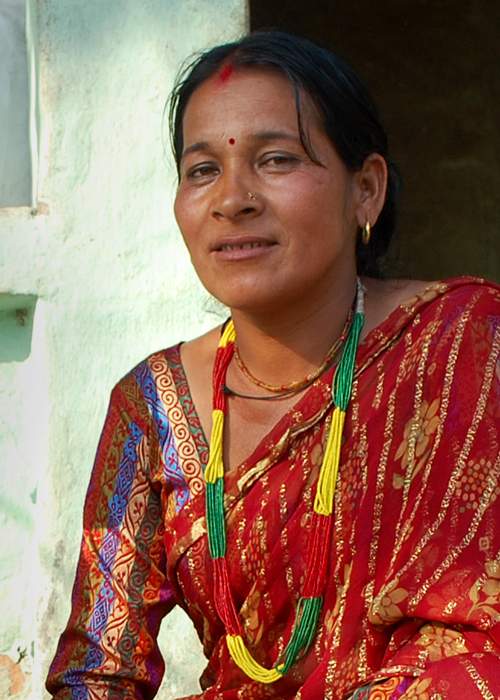 Laxmi works in the area around the town of Dhanghadi.

Here plenty of shops sell sanitary towels, but they are too expensive for the village women, who use balls of cloth instead.

“They wash, dry and reuse them,” says Laxmi.

“I teach them how to wash them properly - to leave them to dry in the sun to kill off bacteria.”

Laxmi's advice on hygiene is readily followed, but when it comes to telling villagers to stop chhaupadi, she's faced angry resistance.

“We go door to door,” she says of her campaign which attempts to persuade families that the gods will not be angry if the old ways are abandoned.

“It's very difficult. People quarrel with us. They even curse. Most of the time we have to go to villages with the police.”

But slowly, over the years, Laxmi has witnessed change in the rural communities she visits.

“People are no longer forcing girls to sleep outside,” she says.

“I think in our area, the practice of chhaupadi will stop in a year.”

Breaking down the huts

Back in the hills of far west Nepal, there has been another drive to end chhaupadi.

Over the past two years, the local government and NGOs have helped organise a campaign to tear down the huts in the village of Majhigaun.

Devaki Joshi owns the local shop and was part of the organising committee.

“In the old days, people didn't shower or wash their clothes so it was more unhygienic during periods - perhaps this is why chhaupadi began,” she says.

“But now at school they have a cupboard with sanitary towels for students.”

But not everyone has accepted the change.

A few houses down from Devaki's shop, Chiutari Sunar sits outside with her mother-in-law. 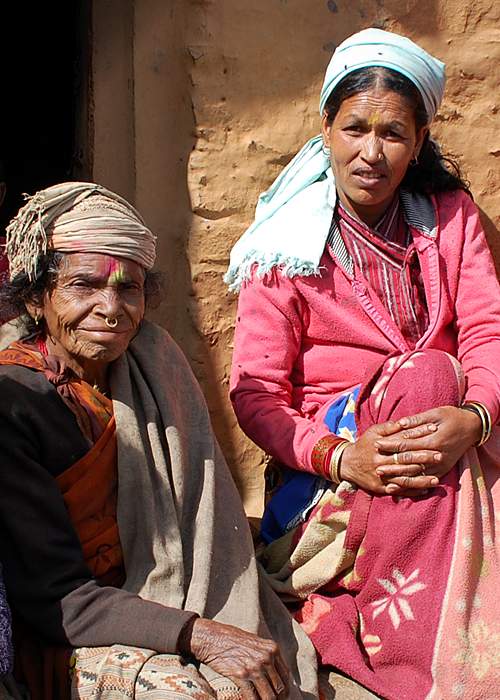 Chiutari Sunar (r) with her mother-in-law

“We still follow the same practices,” she says pointing to the space beneath the house where the buffalo are kept.

It's her new chhaupadi sleeping spot now her old hut has been demolished. 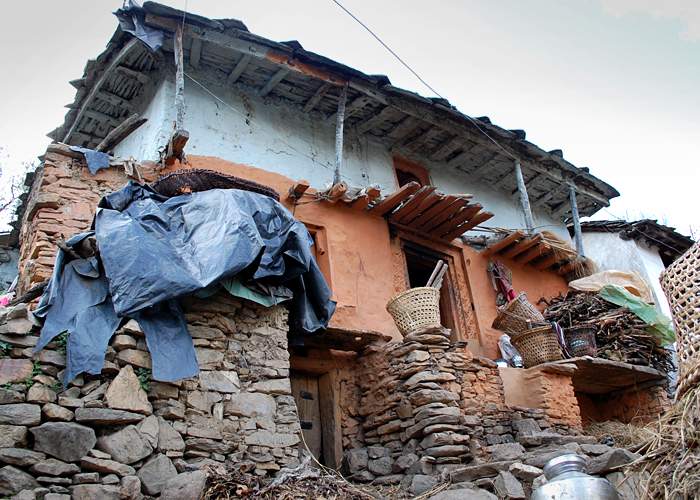 “In our house, when we are menstruating, we can't go inside at any cost, no matter what the government says. This is even more important to me than going to the temple.”

Even Devaki, who is enthusiastic about the success of her project, admits that some people may never accept the change.

“We don't want to hurt the feelings of the older people like my mother,” she says.

“We still don't touch them when we have our period.”

Lila Ghale, the local head of the government department for women and children, says it may take another generation before chhaupadi is fully eliminated.

“We are working with everyone - men, women and even witch-doctors,” she says. 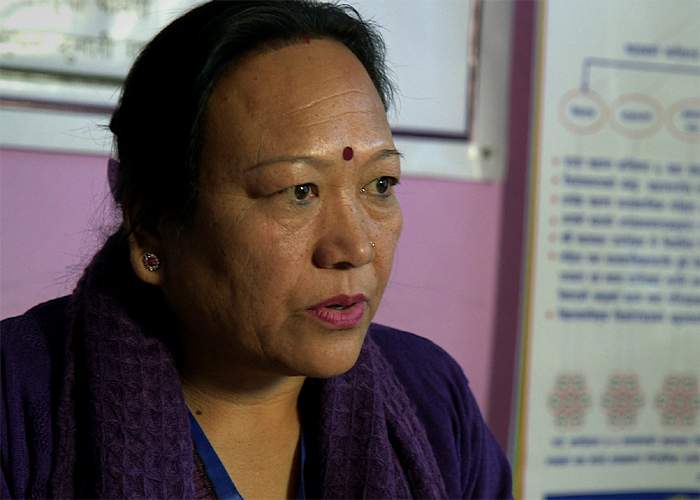 “Our culture is patriarchal and many women are illiterate which makes it hard to change things.”

She wants Nepalese girls to celebrate their monthly bleed.

“Who says it is impure? It gives life. We tell women there is power in their periods,” she says.

“We tell them there's power in your blood.”