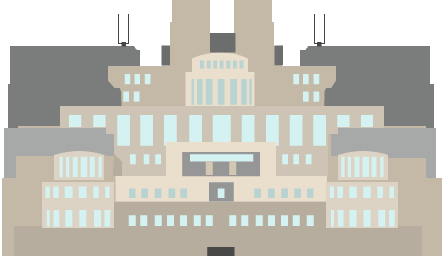 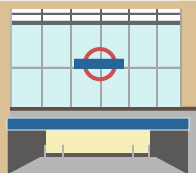 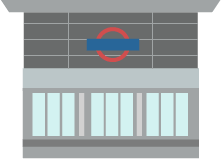 A journey through language

Hurtling deep underground in a Tube train, it can be hard to picture the streets overhead, and harder still to learn much about their eight million inhabitants. But London is one of the most linguistically interesting cities in the world, with more than 100 languages in use across the city.

One way to get a taste for this rich diversity of languages would be to jump on London Underground's Victoria Line and surface at various stations along the way. The line runs north to south for 13 miles (21km), passing through rich and poor parts of town and beneath migrant communities new and old.

The video below combines footage shot from a Victoria Line train, synchronised with its route above ground. The soundtrack echoes the most widely spoken language, after English, at each stage of the route. The underground journey takes just over 30 minutes, but we have condensed the footage into three minutes.

The Victoria Line, but 10 times faster

Hear the stories of some people belonging to the major linguistic communities above the Victoria Line, from Portuguese in the south through French and Arabic in the centre of town, via Bengali around the transport hubs of Euston and King's Cross, and finally Turkish and Polish at the northern end. 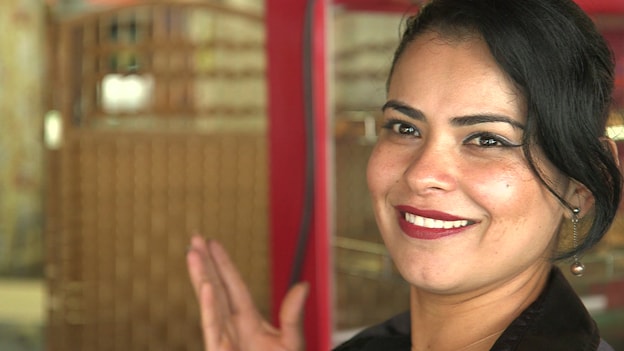 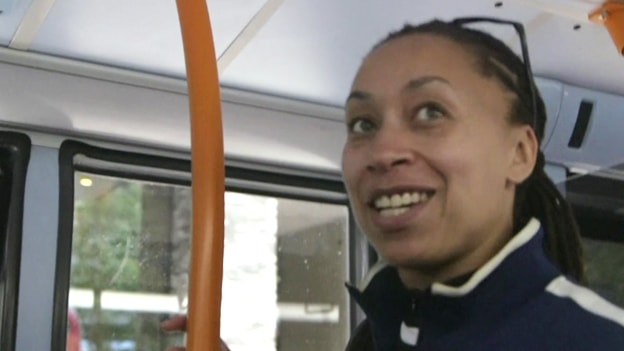 "I miss the baguettes" 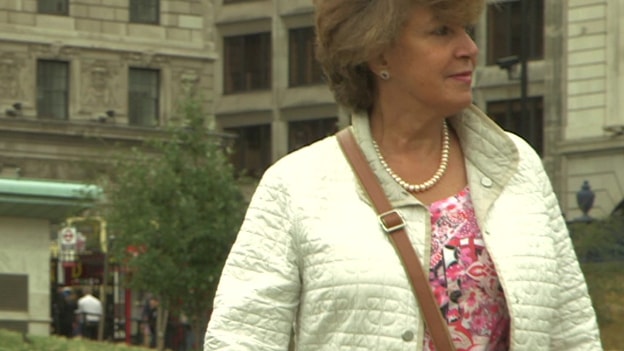 "London is a privilege" 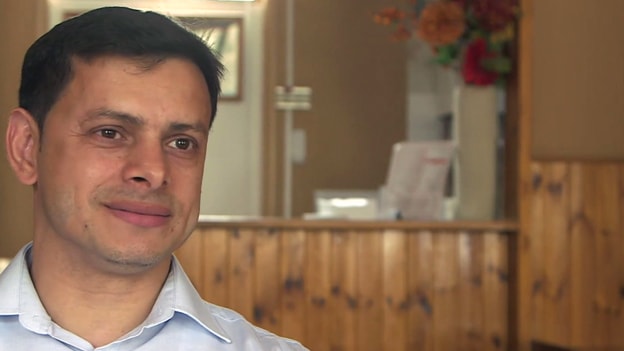 "This is my home" 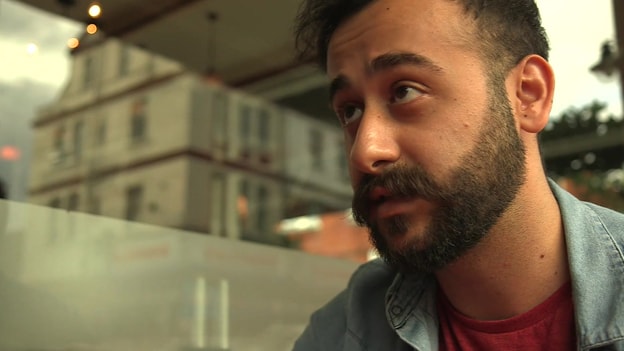 "It's a really cultural place" 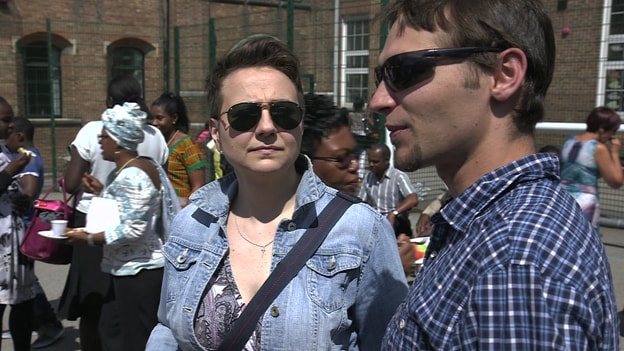 "I still dream in Polish"

"I moved to London eight years ago, and I moved straight to Brixton," says Lucy Cinotti, a Londoner of Brazilian extraction. "Here you can find a lot of Brazilian people, Portuguese, Italian."

"Brixton - it's a mix of cultures"

The southern end of the Victoria Line, particularly between Stockwell and Vauxhall, has long been the focal point of London's Portuguese-speaking community, which has grown exponentially in recent decades and begun to spill over into nearby Brixton. 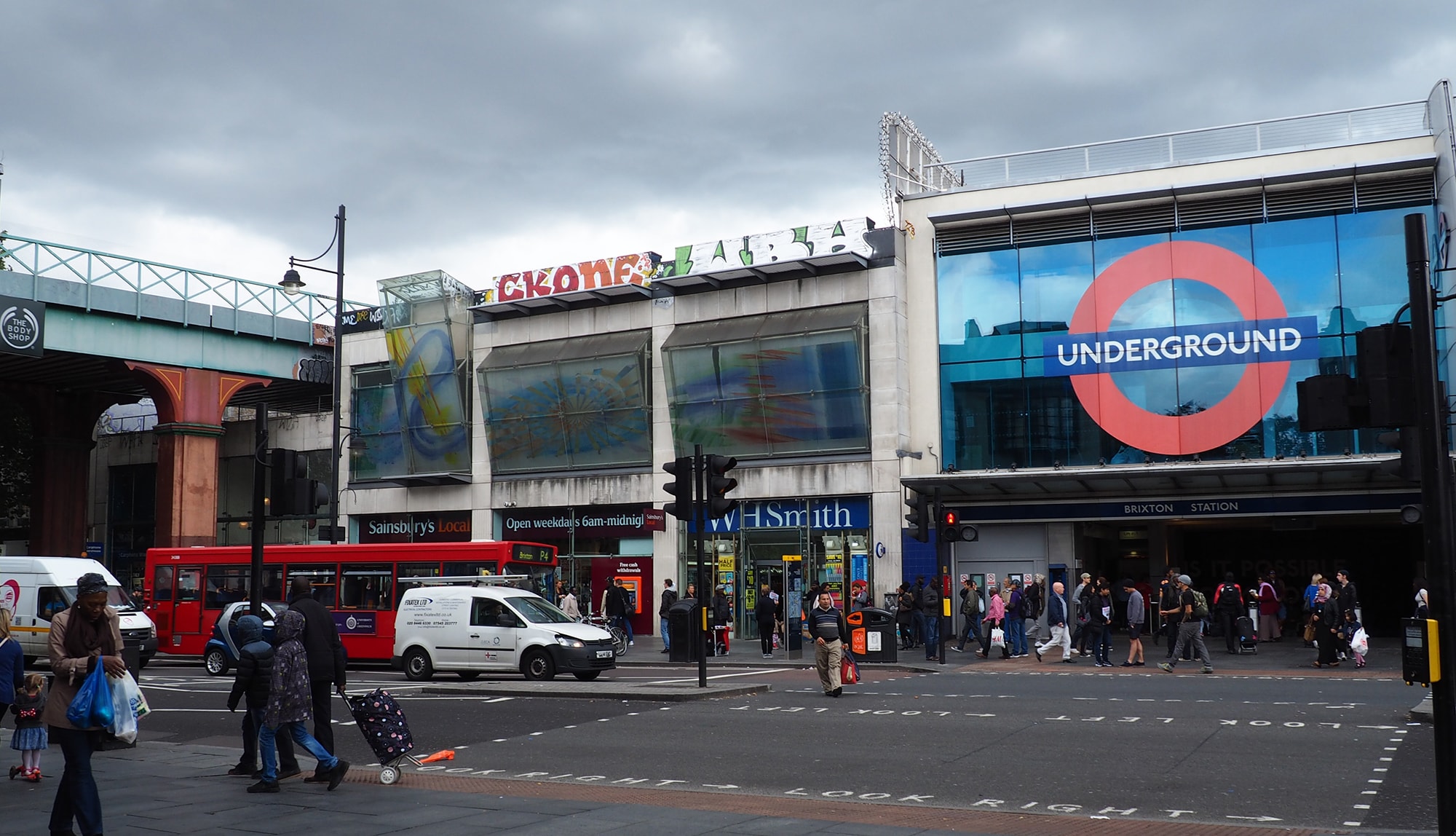 In some parts, about 13% of people told the census that their main language was Portuguese, with about 65% saying it was English. There is also a secondary Portuguese-speaking area in the borough of Brent, north-west of the centre of town.

Londoners with Portuguese as main language 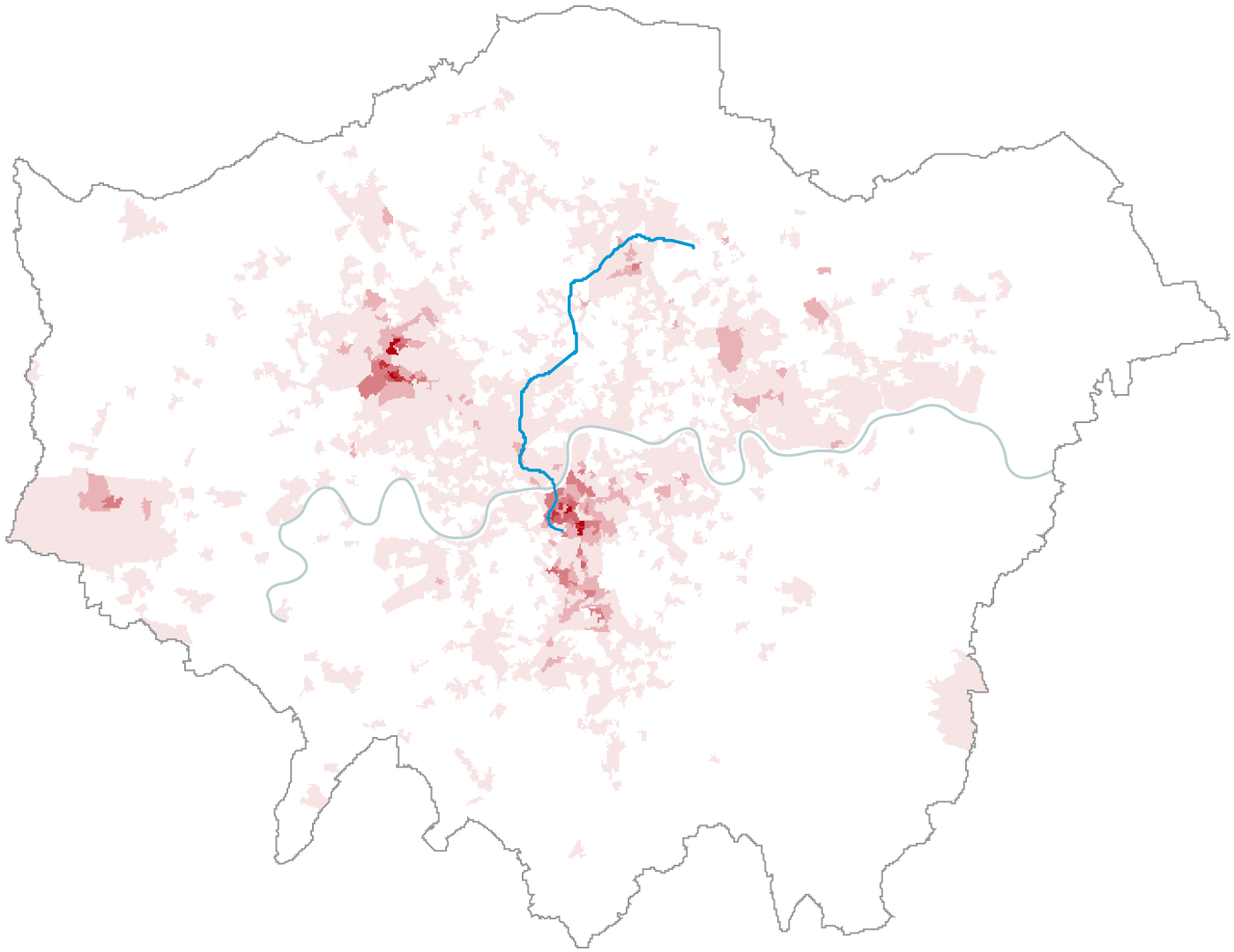 "I was born and bred in Paris, and the colour of my skin was a big problem there," says French expat Myriam Balay. She found London was more cosmopolitan and accepting, and has made the city her home since 1994.

"I miss the baguettes"

The data shows that France's spiritual pied-a-terre is Kensington, west London. "Where all the posh people are," Ms Balay says. But beyond this enclave, French is the most evenly distributed of the Victoria Line's languages.

Londoners with French as main language 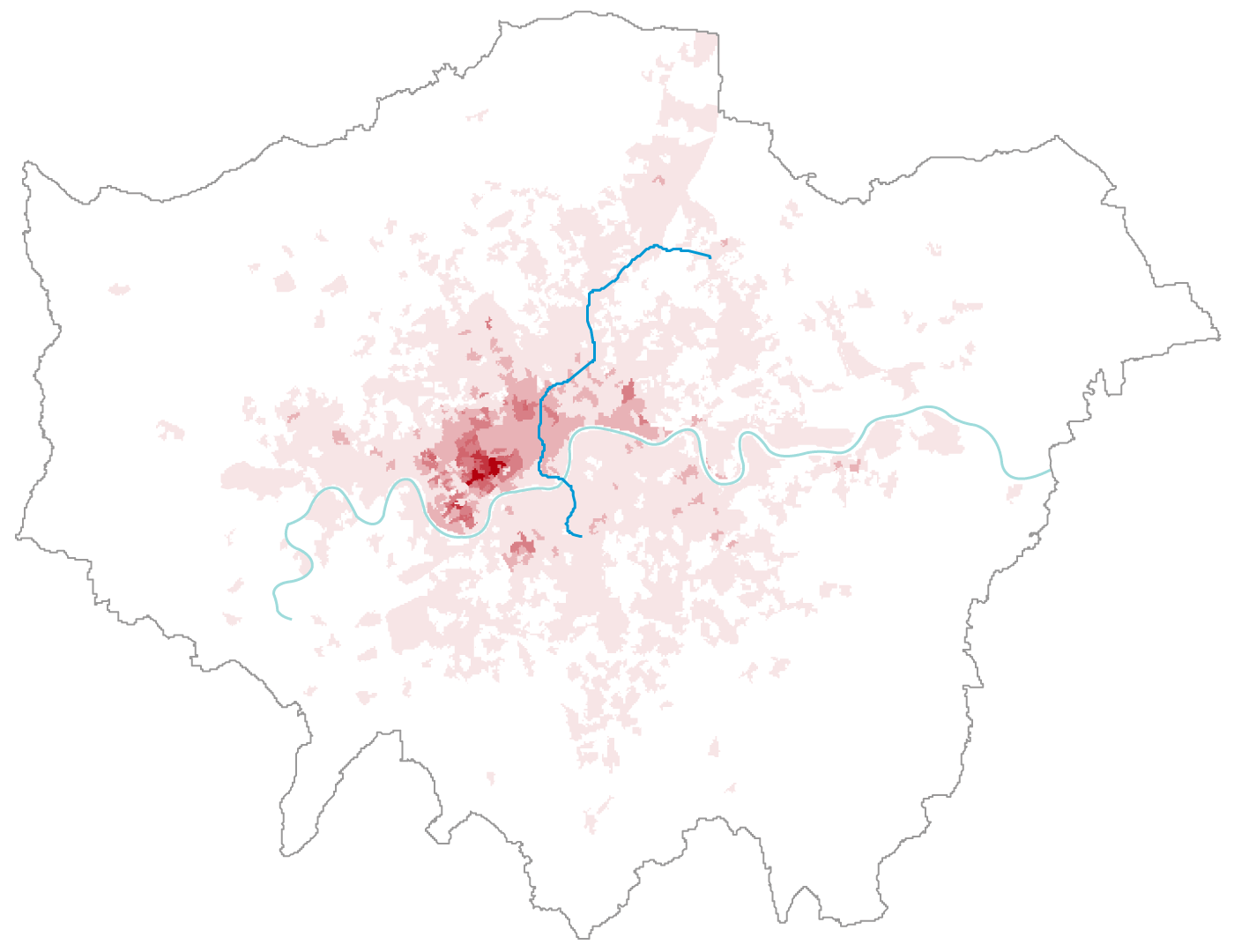 Explaining this relatively even distribution, Oliver O'Brien, a researcher at UCL's department of geography who has previously studied the data, says that new arrivals from France would not feel the same need to cluster around their peers as others from further afield because London would probably already feel very familiar.

Although occupational details are not published alongside main languages, Mr O'Brien also detected hints of an international jetset, with a smattering of French-speaking investment bankers able to live close to their offices in the City of London, just east of the Victoria Line and north of the river Thames. 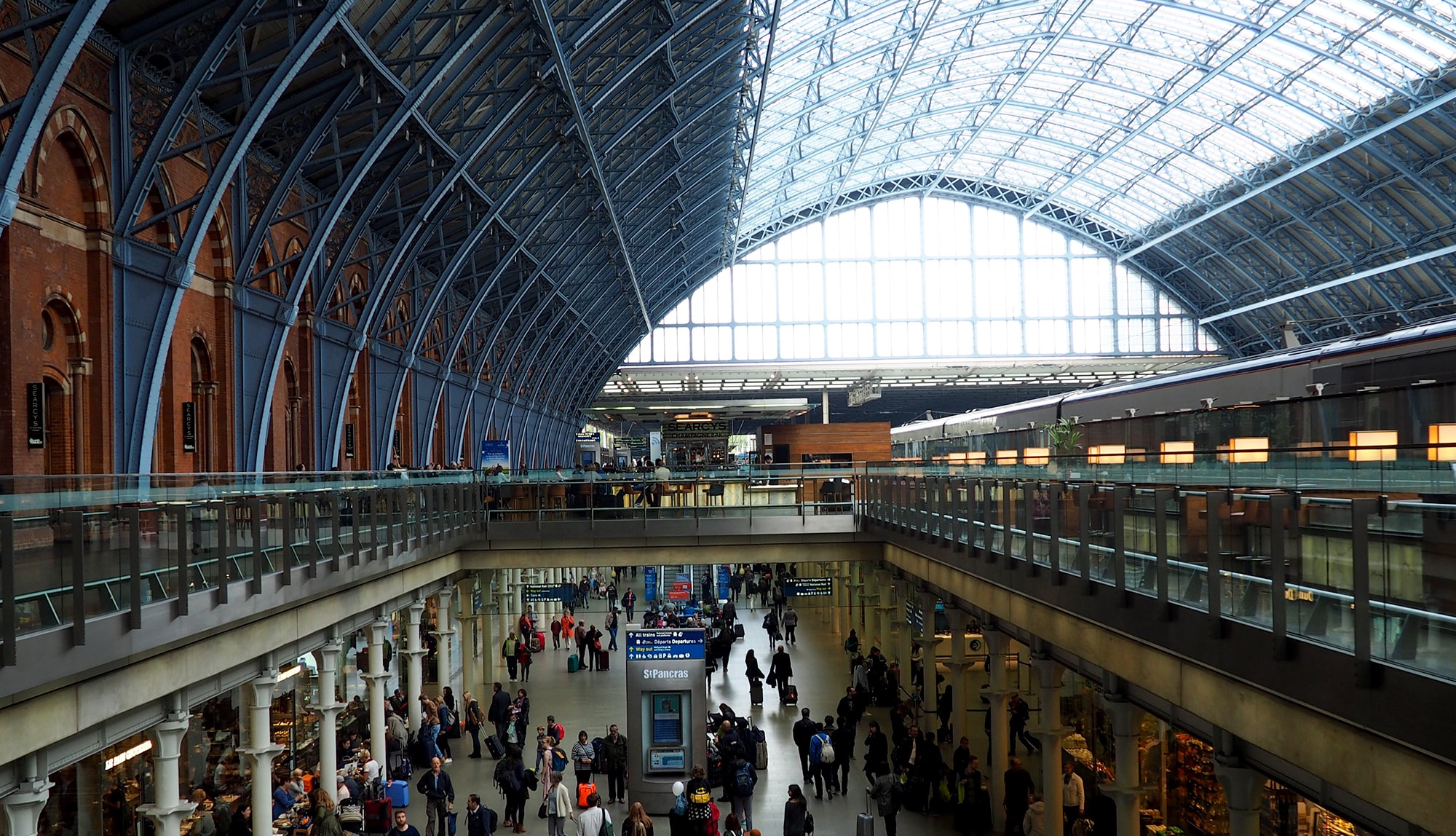 Pictured above, London's St Pancras, from where trains depart for France and Belgium, compares favourably with its Parisian counterpart, according to Ms Balay. "It's so nice and tidy. As soon as you arrive in Paris, you think: 'Ugh, is this really Paris?'"

"When I first moved to London in 1979, we were a very small community, so hungry for emotional support," says Ahlam Akram.

"I am one of the privileged - I live in London"

Businesses catering to Middle Eastern tastes are most conspicuous in London along stretches of Edgware Road, with its profusion of Middle-Eastern restaurants and shisha cafes. Around here, the proportion of native Arabic speakers reaches 23% in parts. 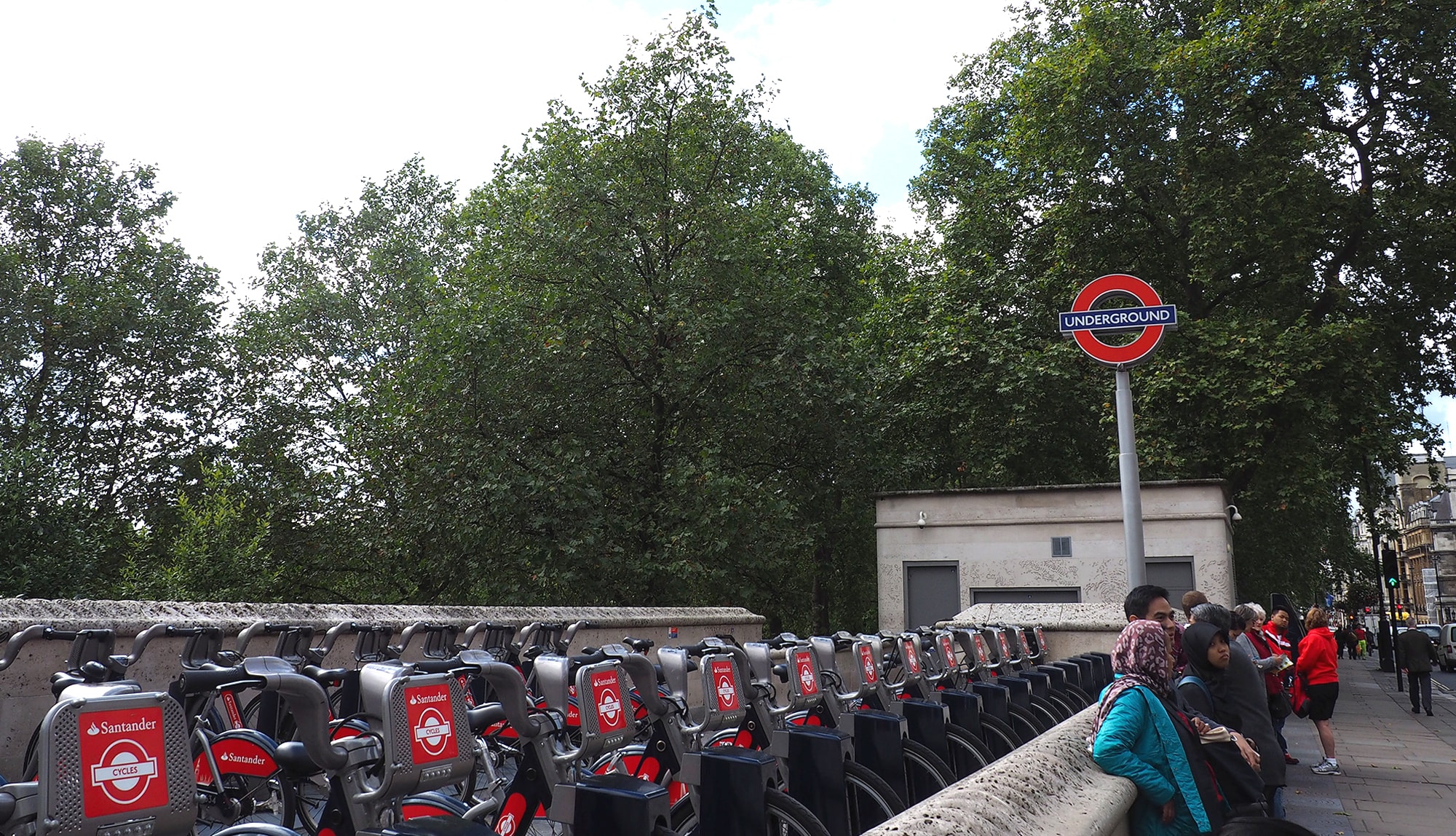 But many of London's most central areas, especially to the west of town, also have a substantial Arabic-speaking population. In the area immediately surrounding Green Park station, for instance, just over 6% of residents mainly speak Arabic. Here property is among the costliest in the world.

Londoners with Arabic as main language 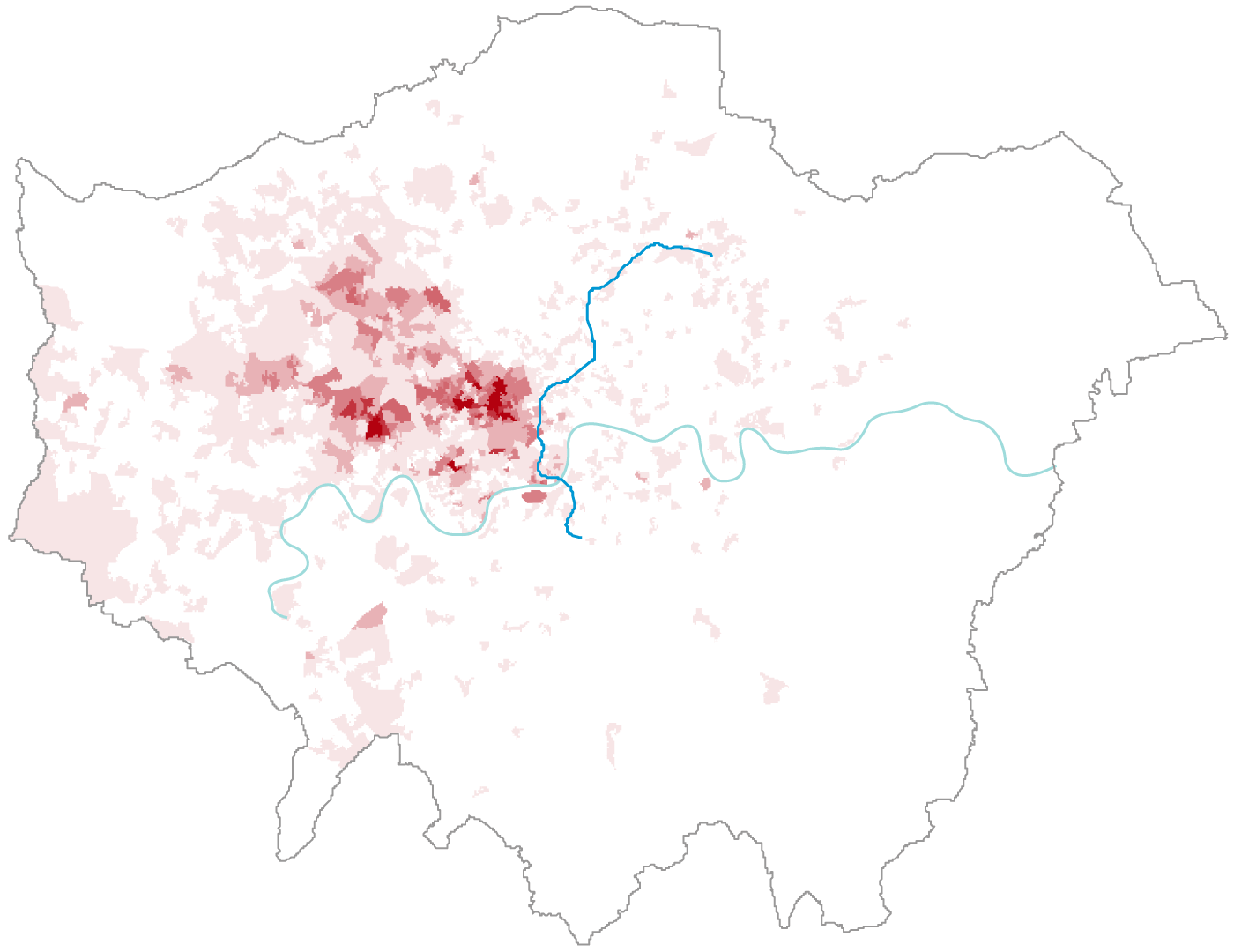 Many people originating from Bangladesh moved into the area around Euston, a major railway station connecting the capital to the north of the country, to meet hungry travellers' fondness of food from the Indian sub-continent, says Mohammed Salique, a local community leader. "Before people get on the train they get takeaways."

"This is my home"

The community Mr Salique represents is a small but significant outcrop of London's Bengali-speakers. Over 20% of people in some areas around Euston and King's Cross said Bengali was their main language.

Londoners with Bengali as main language 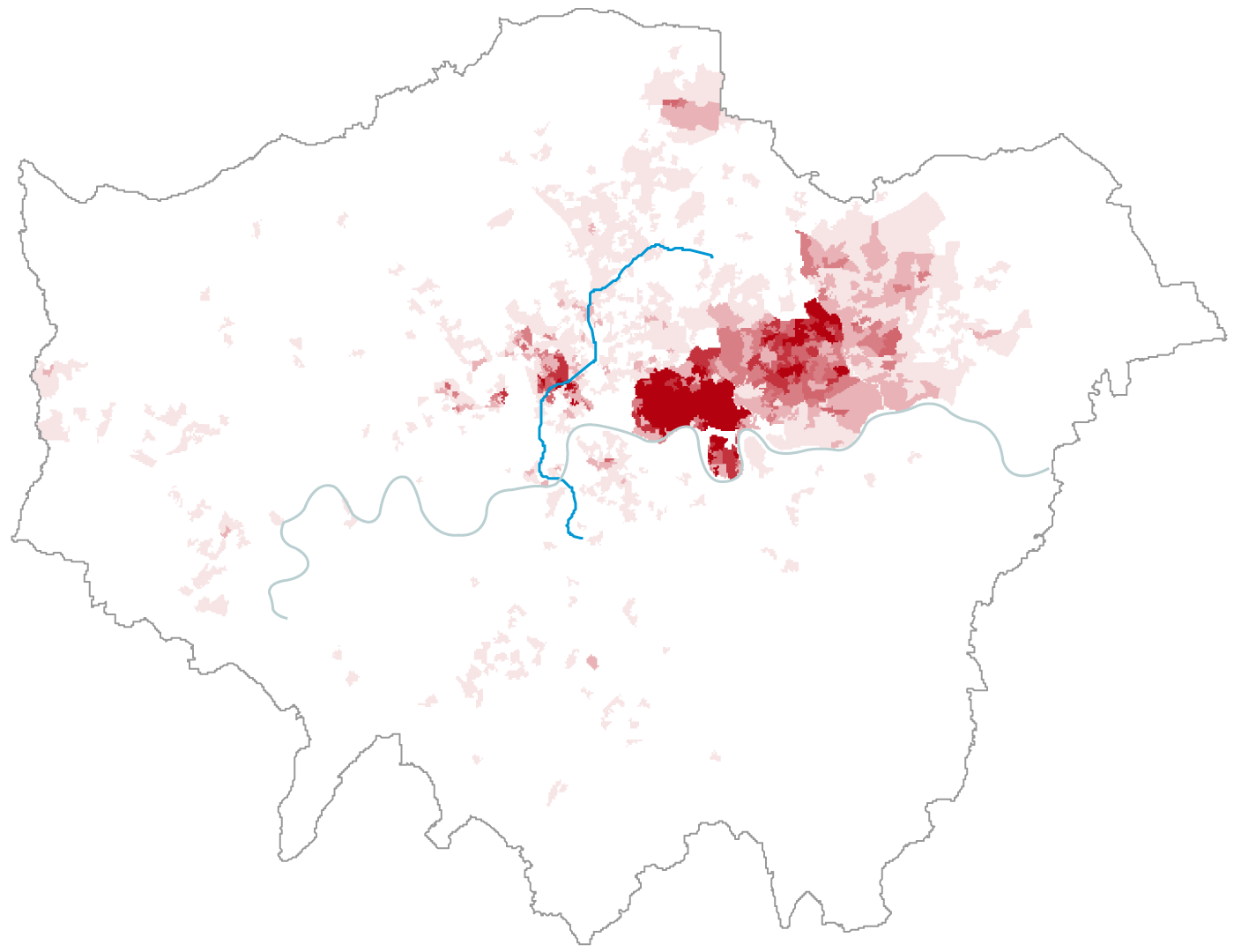 But the area where Bengali is most dominant is Tower Hamlets, the borders of which are almost perfectly delineated by the darkest shades of red on the map to the east of the Victoria Line. A secondary population just to the east is only slightly less loyal to the borough of Newham.

In some parts of Tower Hamlets the proportion of people speaking Bengali as a first language tops 38% - a far higher rate than can be found in London for any of the other languages along the Victoria Line.

Turkish: Can and Ali Gul

"200 languages are spoken in this street"

But while the street is well known for its fine Turkish restaurants, residents of Enfield Town, about six miles further north are much more likely to regard Turkish as their main language.

London's Turkish speakers have confined themselves almost entirely to just three boroughs - Hackney, Haringey and Enfield - clinging to the west bank of the River Lee, which flows down from the outskirts of north-east London via Stratford into the Thames.

Londoners with Turkish as main language 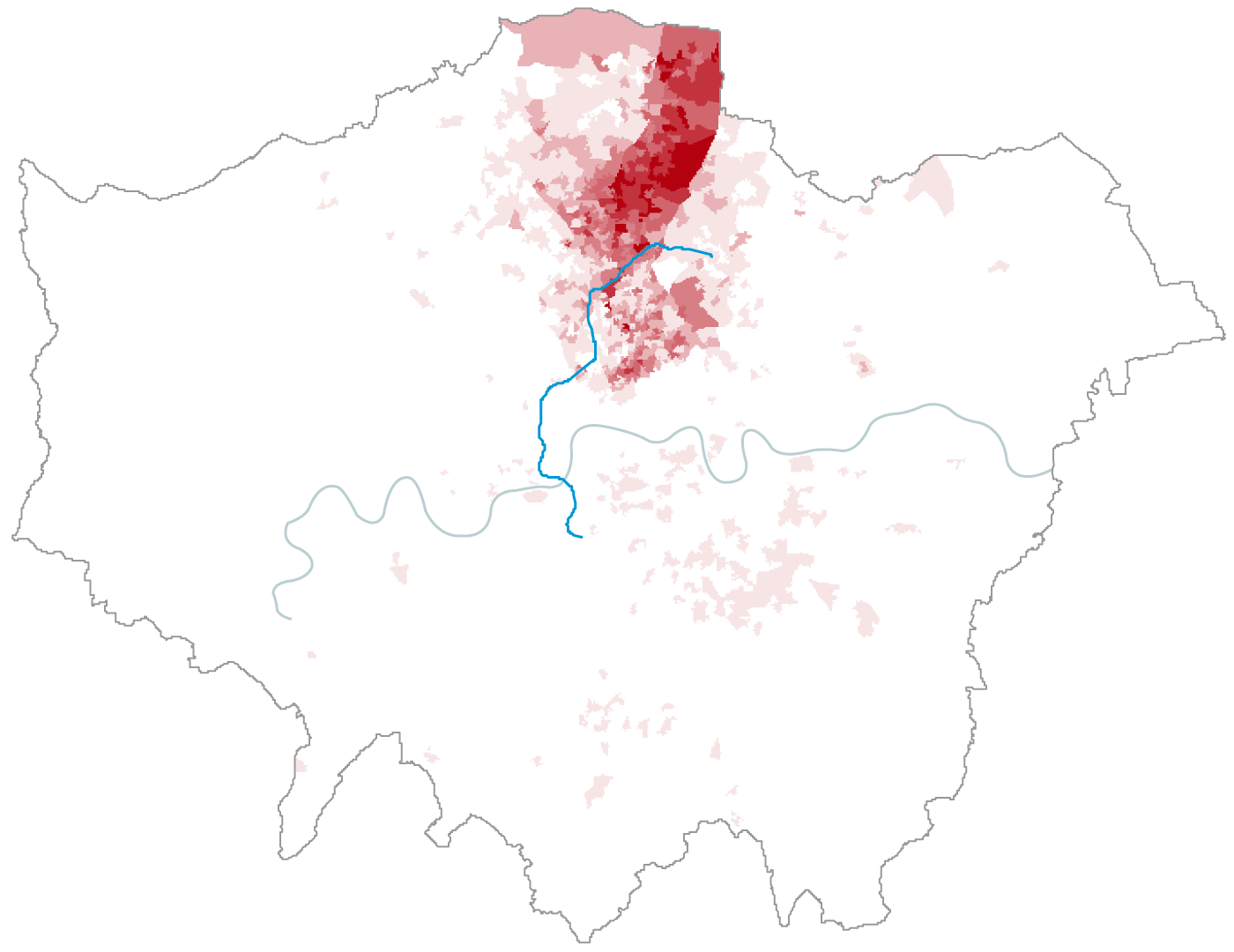 "I still dream in Polish"

Like the overwhelming majority of Polish people recorded in the census, she arrived between 2001 and 2011.

London property was already very costly in 2004, when Poland joined the European Union, and has continued to soar in value since then - perhaps explaining why Polish speakers have tended to cluster in the suburbs.

Londoners with Polish as main language 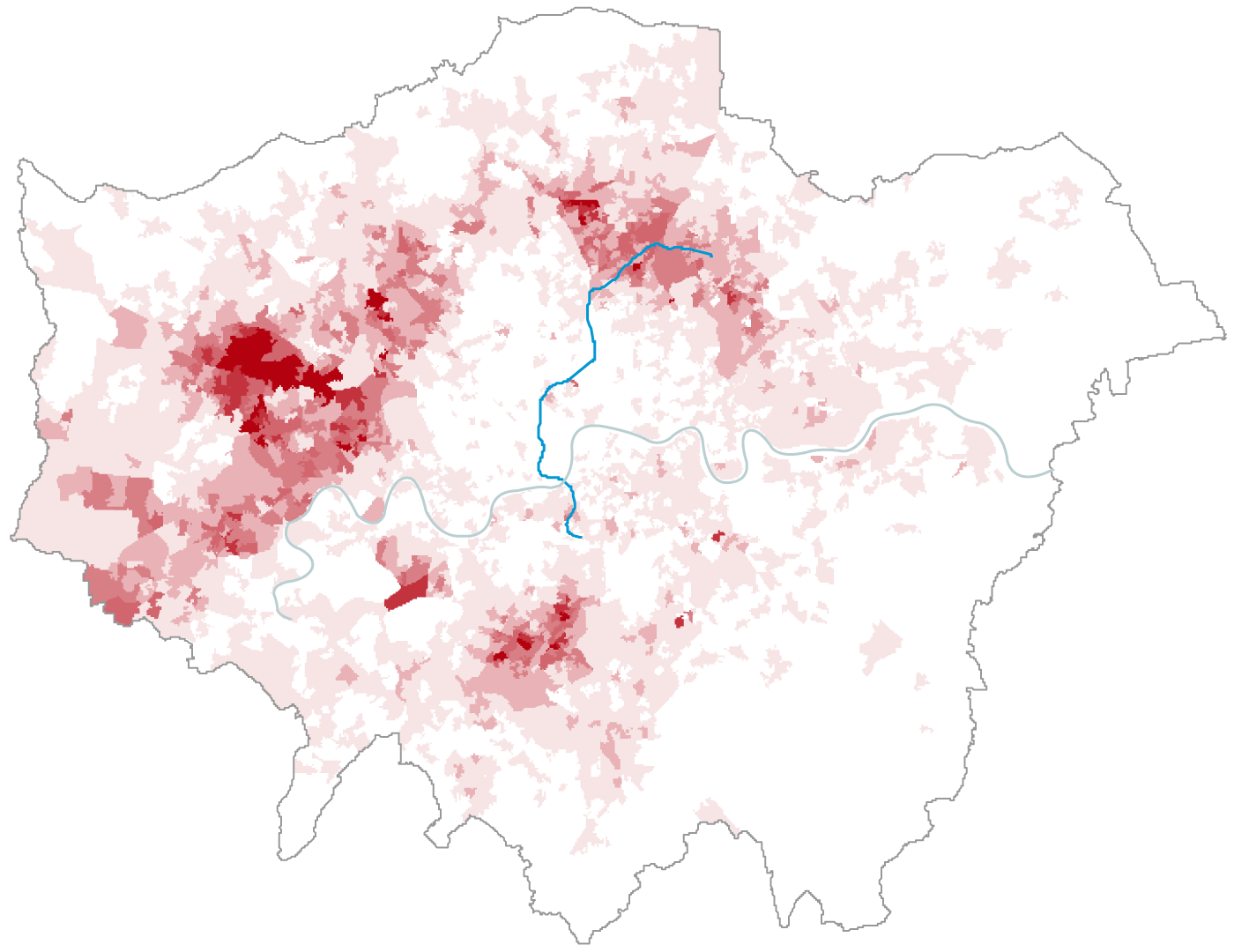 Although the biggest concentration of Poles is around Ealing in west London, pockets of Polish-speakers have also made the northern tip of the Victoria Line home.

For the first time in its 210-year history the census asked residents in 2011 what they used as their "main language".

English was the main language for the overwhelming majority of respondents in nearly all parts of London.

Londoners with English as main language 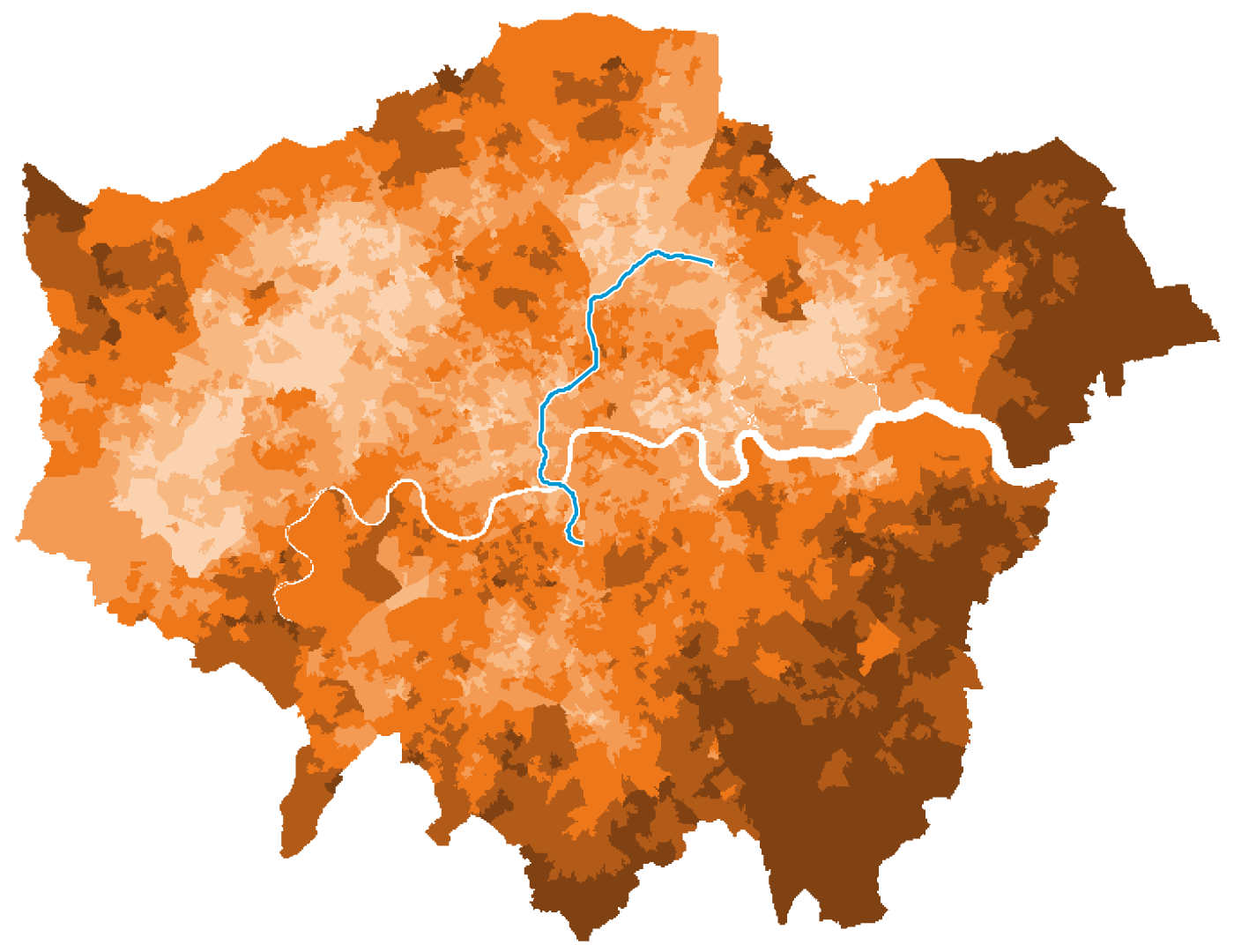 But the data also shows the extent to which expats remain faithful to their mother tongues, and how those sharing the same linguistic heritage, like Brazilian and Portuguese people, have tended to congregate in the same areas.

This article has focused on a selection of the most widely spoken languages along the Tube route according to this data - but there are many others too.

Central London's linguistic diversity is brought into relief by the map below. Along many stretches of the Victoria Line more than 11 different languages are listed as a main language by at least 1% of residents.

Number of main languages in use 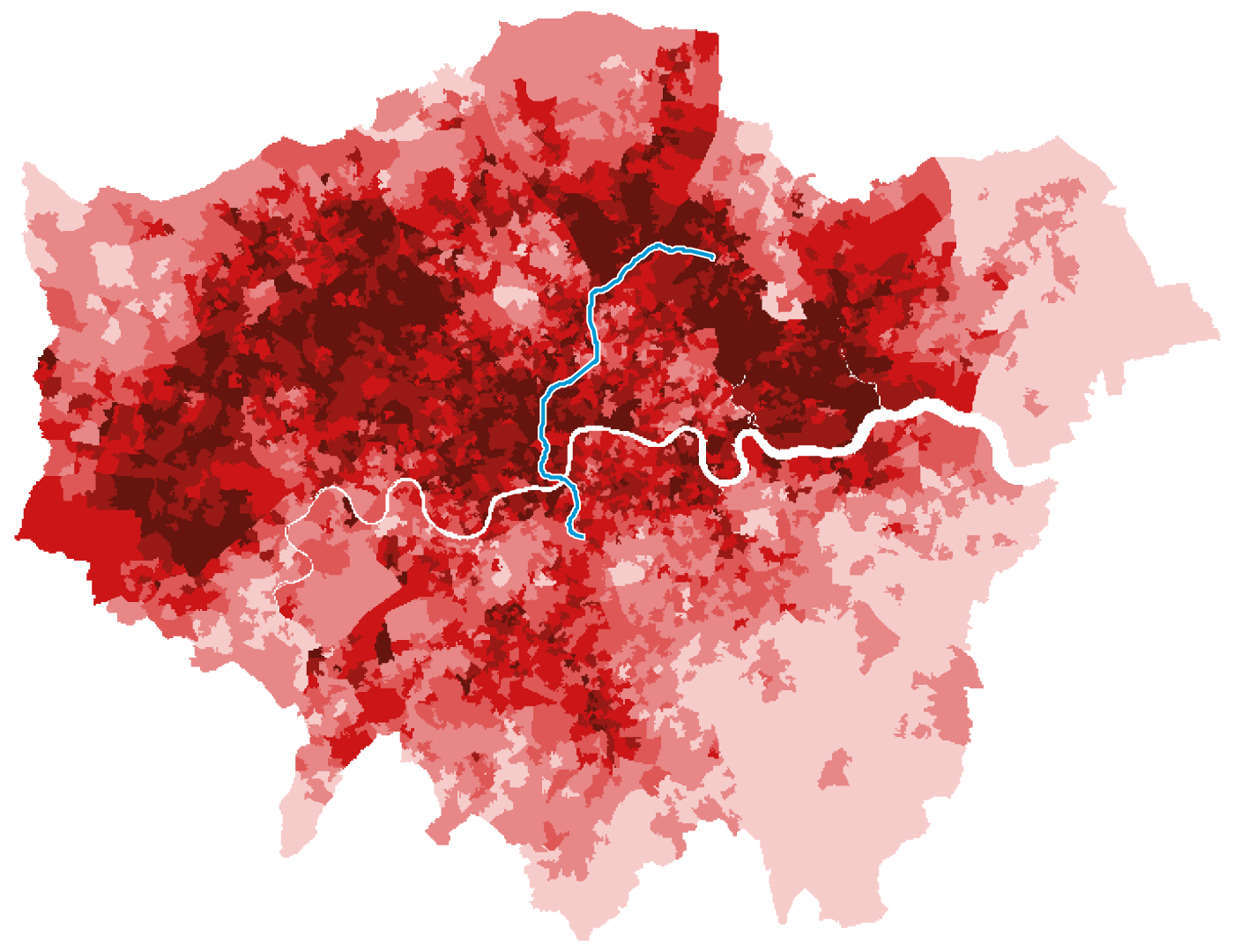 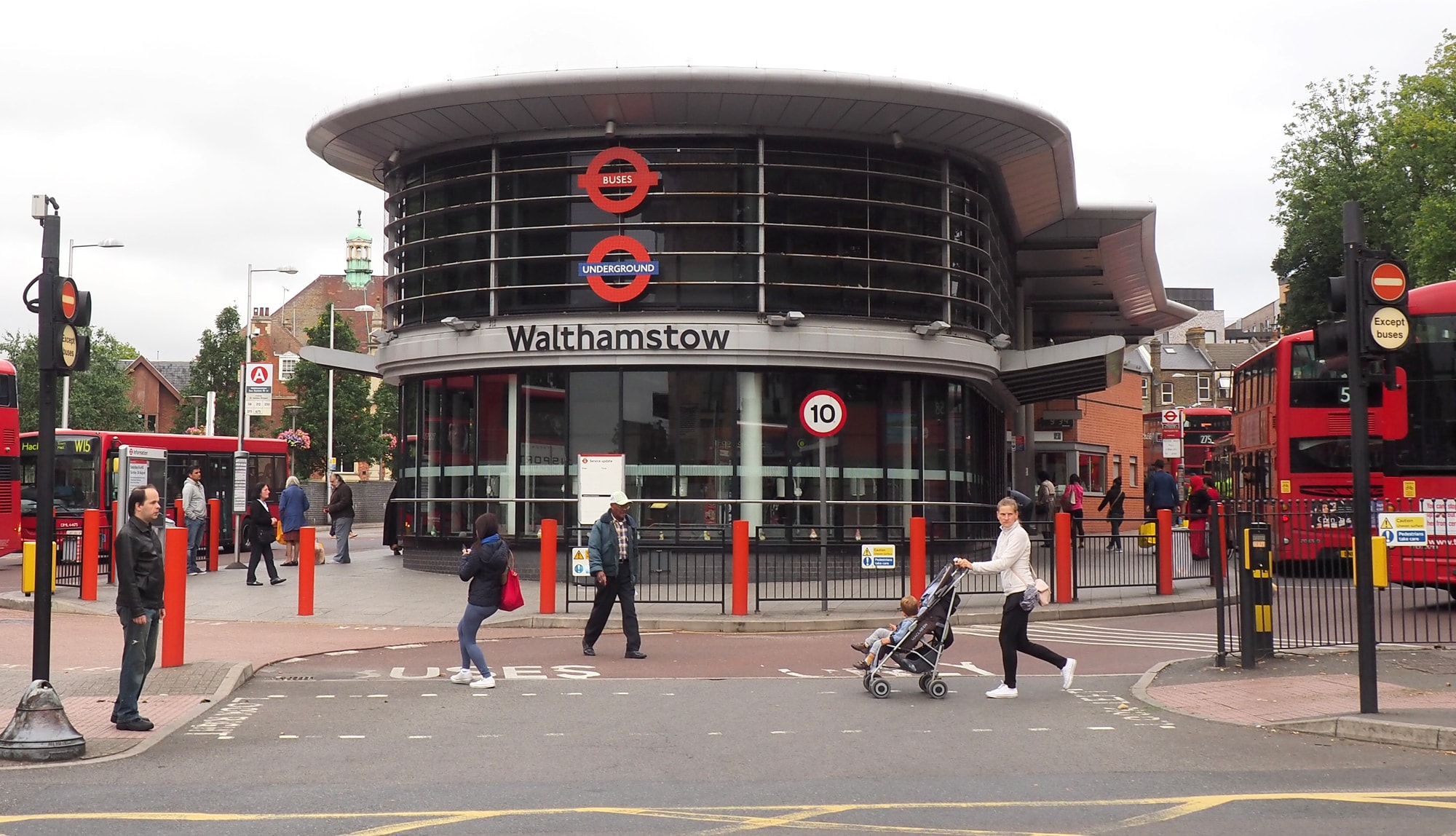