Joe Sugg says his success on Strictly Come Dancing has given other YouTubers hope of having successful TV careers.

The 27-year-old made it to the final of the show in December, losing to Stacey Dooley.

Speaking at a conference for vloggers this weekend, Joe said his appearance "was beneficial for the whole of social media".

He previously said he hoped going on Strictly would "build a relationship" between vloggers and broadcasters.

Joe was speaking at VidCon London.

But that transition from social media to telly is not one all are capable of making.

Lucy's the head of talent at Gleam Futures - the UK's largest agency for online stars.

"They've been in their bedroom [vlogging] and need a bit of coaching," she explains. "That investment is necessary."

Holly Horne, who has more than 13m followers on social media app TikTok, says she's starting to be approached more by execs.

"Life is starting to get crazy," she explains. "Since I've blown up over the past few months there's been offers and I've said yes to everything."

The 22-year-old from Guernsey, known online as HollyH, posts comedy lip syncs and is the most followed Brit on the platform.

tag someone that never listens when u talk 😂

"I've had a couple of meetings over the past few days which have been insane," she tells Newsbeat.

When asked if she'll be taking part in this year's Strictly Come Dancing, Holly smiles and says: "Joe Sugg's manager is my manager so crazy stuff is going to happen."

Holly also said she'd like to move into movies and is working on a CBBC series.

It's the same on the other side of the Atlantic too.

"We're getting opportunities because of YouTube," the Merrell Twins tell Newsbeat.

"I'm not trying to brag but it's crazy the numbers we can bring," Veronica explains.

"Traditional media see the influence we have and want to get viewers."

"It gave us validation for the role because of the success our channel." 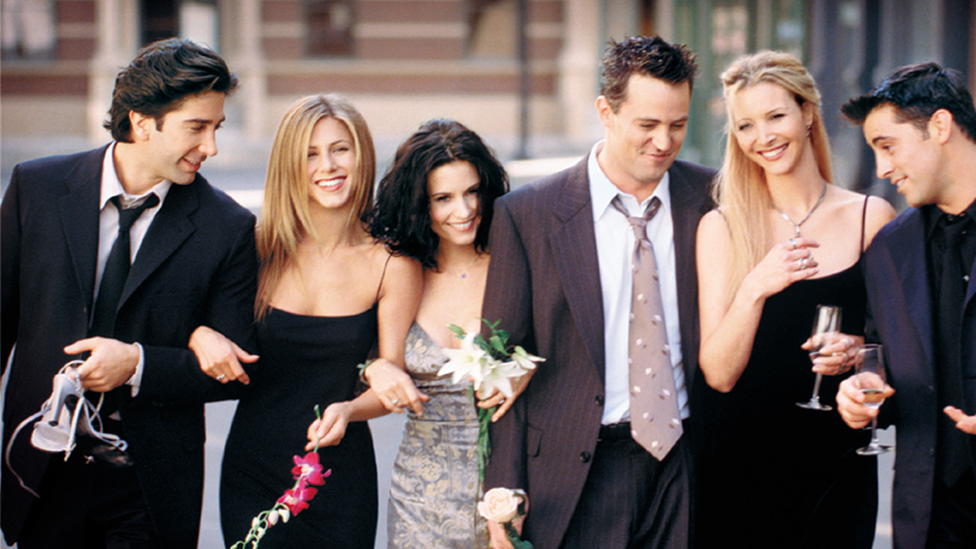 Younger audiences spend more time online than they do watching TV or films, with only 10% of young people getting "almost all" their TV programmes through a TV screen.

But, as Lucy Loveridge explains, there's a limit to what online stars can bring to TV.

"There's no T4 anymore and that was such a testing ground for finding and developing new talent."

Riyadh Khalaf, a YouTuber who's made documentaries for BBC Three and hosts a podcast for Radio 1, says: "I only went on YouTube because I couldn't get a job on TV."

He says TV execs started to take notice when online sites started writing about him but "they didn't know where to put me."

Cheeky studio snap from our first show on @bbcradio1! Just a few months ago @alixfox and I eagerly walked into Broadcasting House to talk about a potential podcast pitch (Unexpected Fluids💦) and somehow it landed us on air at a station I’ve fantasised about since, well, forever. Thanks for all the love and support last night, it was seen and appreciated! Here’s to the next one 🙌🏻❤️🎧 (Search our names on the @bbcsounds app to listen back👌🏻)

"We are now proving to traditional media that if you develop us and train us we can be just as good as Davina McCall, Alan Carr or Graham Norton.

"There's a real democracy of talent, which is great."

Wear masks in public, WHO says in new advice

The World Health Organization changes its guidance saying masks can help stop the spread of the virus.

Back to a very different kind of school

'This was not a normal week - our spending doubled!'

The anatomy of a pandemic

Children explain why they are protesting

The actress talks fame, Weinstein and the future