Harlem Shake: Tracking a meme over a month 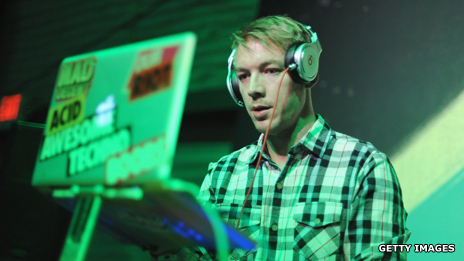 Early videos are tweeted by producer Diplo and website College Humor to over 600,000 followers each. 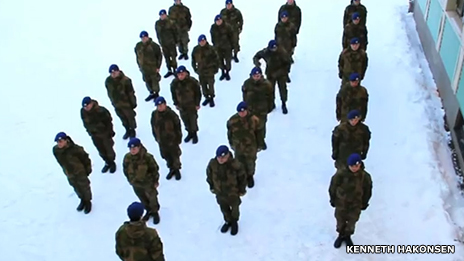 A Norwegian Army unit makes what becomes the most popular version.

Harlem Shake gains mainstream attention. The Today Show in the US does a version.

YouTube claims over 175 million views of Harlem Shake videos. Interest grows despite predictions of a demise. 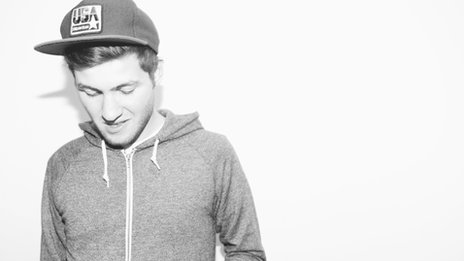 Baauer goes to the top of the Billboard charts due to YouTube views.

The Harlem Shake viral video trend, which has sparked over 100,000 imitations and garnered nearly a billion views, has been going a month. It's been unique in the speed of its spread.

On 2 February, the Harlem Shake video meme was born. By 11 Feb, YouTube claimed there were 4,000 videos being uploaded a day.

Over 700 million people have viewed the videos, YouTube says. More than 100 versions have at least a million views. The most has nearly 40 million.

The format is simple. The soundtrack to every video is New York DJ Baauer's song Harlem Shake.

Each video lasts about 30 seconds. For the first 15 seconds, one person - often masked or in a helmet - dances in front of apparently oblivious or uninterested people.

As the bass drops, the video cuts and suddenly the screen is full of people dancing energetically and festooned with weird costumes and props.

What is a meme?

Each one taken in isolation is hardly an interesting slice of culture, but taken together the videos provide an insight into how internet memes spread.

Most viral trends require only sharing, liking, or viewing. But Harlem Shake has been about users actually making videos.

Baauer has not been involved and the numbers of new videos dwarf other recent trends like Gangnam Style, the South Korean music video by Psy.

The fact that it is short and easy to replicate, with a consistent format, has been central to its success, says Kevin Allocca, YouTube trends manager.

"That's what gives it these legs, as opposed to a single video that maybe you can reproduce but there isn't something creative that you can do to make it your own."

But for the first few days of February, there was little interest.

Potential viral trends need to be picked up by "someone of higher standing in the social media world", he says.

In this case it was Baauer's producer Diplo and website Collegehumor.com. On 7 February they tweeted the early Harlem Shake incarnations to their hundreds of thousands of Twitter followers, Adams explains.

Often just "a couple of individuals give it momentum" before it grows exponentially.

But Harlem Shake's trajectory is distinct from previous trends.

It many ways it's the "natural successor" to Gangnam Style, which also sparked numerous copycat versions but had a central video as a reference point, gaining it over a billion views.

Harlem Shake has no central reference point. The most popular has been one of the legions of later imitators - a version by a Norwegian army unit posted on 10 February by Kenneth Hakonsen.

But there may be parallels in how "everyone thought it would be dead" long before it was, suggests Wood.

"With most one hit wonders, they spike quickly and then die away. This is growing despite mainstream attention. Normally that's the moment it 'jumps the shark'."

Between 2 and 6 February there was little action. On 6 February, Twitter users began circulating the videos in higher numbers, before the trend was picked up by music producers Diplo and Collegehumor.com. By 9 February, a local news station in the US had already made its own version.

National US morning programme The Today Show did a version on 13 February and commentators were quick to declare the meme dead.

"When it gets on a national TV programme, people who were on board early start saying to themselves 'this is now over for me'," agrees Allocca.

It didn't die though. It carried on gaining in popularity.

Allocca feels that mainstream attention actually sustains these trends and increases their popularity rather than killing them by rendering them "uncool".

"For a large group of people who have never seen it before, they're seeing it for the first time on that show potentially, and now it's spreading it even further."

Baauer's song reached the top of the US Billboard music charts thanks to its views on YouTube.

But how long can the meme last?

"This has been the number one question," says Allocca. "My friends have been asking me, I think my parents have even been asking me - 'Is the Harlem Shake over?'

"I wouldn't say people are necessarily sick of it but there's an expectation that it's supposed to be ending at some point."

There has even been a backlash of videos attempting to resurrect the original 1980s Harlem Shake dance, from which the song gets its name.

But predicting an imminent demise is unwise.

"Maybe for the college kids who got on the Harlem Shake bandwagon in the first week, it's over," says Allocca. "But we're still getting tens of thousands of these things posted, so today some kid in Russia is going to discover the Harlem Shake and make a video because this is a global thing now."

More than half of the videos are not even from the US, he says. The two videos that sparked the craze were from Japan and Australia.

"It is a cultural phenomenon, not just a video phenomenon," says Woods.

Unrestricted by language barriers, it can continue growing into different countries.

In Egypt and Tunisia there is even a political connotation. Clampdowns and arrests of people making Harlem Shake videos in recent days could make the trend evolve even further.

Nevertheless, inevitably the interest will tail off. A new meme will capture the attention of social media users and the Harlem Shake will be consigned to the history books along with Carly Rae Jepson's Call Me Maybe and Gangnam Style.

That will make a lot of people glad.

Home Office boss quits over 'campaign against him'

Why has the latest UK storm been named 'Jorge'?

Why you won't run to Whitney's hologram tour ★★☆☆☆

Is this Joe Biden’s big comeback?

Where are we with a coronavirus vaccine?

Stream series one to four now