US journalist Paul Salopek is going to spend the next seven years walking from Ethiopia to the tip of South America, retracing the journey of early humans out of Africa and around the world.

Along the way he will be writing articles, shooting video and tweeting.

Salopek will take some 30 million footsteps during this journey, which he calls "the long walk into our becoming". So there is a lot of potential for blisters.

But he insists he is not doing this as some kind of extreme sport - he will be thinking hard, en route, about human evolution.

The starting point for the trek is Herto Bouri, a site in north-eastern Ethiopia populated by early humans in the Middle Stone Age.

"Paleoanthropologists have found an extremely old Homo sapiens fossil there, which might be as much as 160,000 years old," says Salopek.

"Since the group of people whose footsteps I am following are early homo sapiens, the fit is pretty good."

He is interested in how small groups of hunter-gatherers colonised the world.

"I shall be retracing the pathways of the first human diaspora out of Africa, which occurred about 50 to 70,000 years ago, as authentically as possible, on foot," he says.

From Ethiopia's Rift Valley he will walk with Afar nomads to the Red Sea and cross over into Arabia, where he will follow the western coast north to the Middle East, ending the year either in Jerusalem or Amman.

"From there I shall continue the trek eastward across Eurasia into East Asia, through China and north through Siberia," he says.

China alone will take him 14 months to cross.

"I'll hop a boat across the Bering Straits and then ramble down the New World to Tierra del Fuego, the place where our ancestors arrived about 12,000 years ago, the last continental corner of the world to be colonised by our forebears."

The route Salopek is following is one of a number of possible ways that humans left Africa and settled the world. 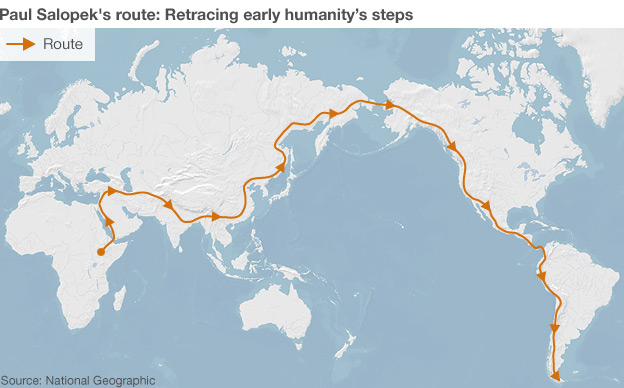 All non-African people are descended from about 2,000 early Homo sapiens who set off from what is now east Ethiopia 60,000 years ago and crossed into Arabia

Early humans would have moved in response to local food and resources, dispersing at a rate of about 1km a year

Initial human colonisation of North America occurred between 18,000 and 12,000 years ago

Some anthropologists favour this southern route, across the Red Sea in to Arabia, says Dr Toomas Kivisild, lecturer in evolutionary genetics at Cambridge University. Others favour a northern route through the Sinai Peninsula.

Humans reached Europe (on foot) and Australia (by boat) about 45,000 years ago.

And they probably left Africa several times, says Kivisild. Evidence for an early and unsuccessful departure exists in the Middle East from 100,000 years ago. A later successful dispersal occurred 60,000 years ago.

Salopek's walk is being paid for by National Geographic, which has appointed him one of its fellows. The Knight Foundation will be paying for the website that will record the adventure.

Seven years walking around the world could be lonely but Salopek's wife, an artist, will be joining him from time to time during rest periods. And during the walking periods Salopek will be accompanied by translators and fixers familiar with the 36 countries he intends to cross.

"At the beginning of the walk I shall have access to cargo camels… in which case I shall just be carrying a rucksack and leading the camels," he says.

"The kit that I am carrying is pretty basic stuff. There will be communications gear so that I can transmit stories and images, and also the usual camping gear. I try to travel as much as possible on the local economy, replenishing my supplies and equipment in local markets or souks."

Even accompanied, Salopek acknowledges that he is vulnerable to thieves, or worse. Western tourists have been kidnapped in eastern Ethiopia and Salopek will be travelling through a troubled Middle East. Although he is happy to discuss the route of his walk he is wary about divulging exactly where and when he will be on any particular day.

A biologist by training, Salopek argues that human beings evolved to understand the world at walking pace, after they developed the ability to walk on two feet three million years ago.

"There is an actual neurological basis to what I am talking about," Salopek says.

"You can make a pretty good evolutionary argument that this was how we were designed to absorb information at about 5km an hour (3mph)," he says. That is an average walking speed.

But he also admits that the idea of a long-distance walk strikes him as fun.

"I just simply like to walk and always have. I have often moved on foot, sometimes on mule-back, sometimes on canoe, through stories that I have covered. I like doing it," he says.

At the same time, he wants to develop - or perhaps rediscover - a way of telling stories.

"It is a project about trying to extend attention spans in an age when the tidal wave of information is overwhelming us all," he says.

Salopek worked for years as a foreign correspondent (during which he won two Pulitzer prizes), spending a lot of time in Africa. He compares to fast food the fast journalism that most reporters are required to produce.

"We miss texture. We miss colour. We miss flavour," he says.

He argues his "slow journalism" will have more depth, "simply because I am moving more slowly through the story".

Salopek says this form of journalism could even be more important than reacting to such epoch-making crises as 9/11.

"Had there been more people paying close and scrupulous attention to what was happening in refugee camps on the Afghan-Pakistan border… if we had actually taken the time to not do drive-by journalism, where we only react to crises, then we might actually have had fewer crises to report on," he says.

He hopes his seven-year walk will enable him to make contact with the world from which the glamorous headlines and flashpoints emerge.

"These are the invisible populations who rarely get covered," Salopek says.

It is their stories that he wants to tell.

Paul Salopek was speaking to Newsday on the BBC World Service