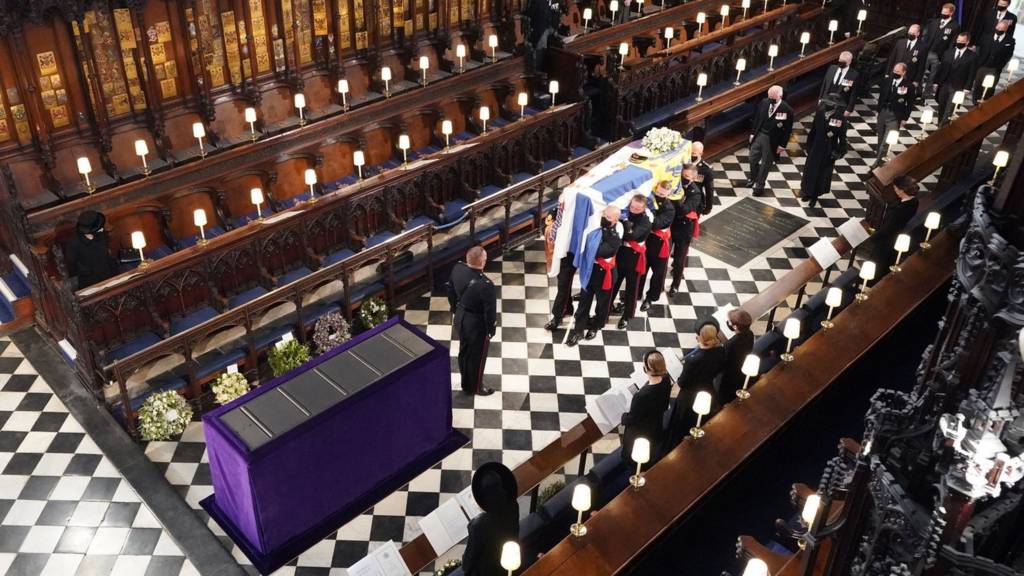 The funeral congregation was socially distanced, with the Queen seated alone, because of Covid rules.

In pictures: The Queen and nation bid farewell

Almost 100 years after he entered the world on a dining room table in Corfu, Prince Philip's final journey has taken place.

The Duke of Edinburgh's life was filled with contradictions but will be remembered most for his unstinting support of the Queen.

Prince Philip: A life in pictures

Key photographs, from his early days in the Greek island of Corfu to school days in Scotland and his life alongside the Queen.

Covid restrictions mean only 30 mourners were allowed to attend the funeral of the duke.

The Duke of Edinburgh oversaw modifications to the car, which will carry his coffin at Saturday's funeral.

The order of service for Prince Philip's funeral

The service, which starts at 15:00 BST with a one-minute silence, will be broadcast on BBC One.

Who's in the UK Royal Family and how does it work?

Here are some of the things you need to know about the British royals.

How Prince Harry can attend the funeral

The Duke of Sussex has returned to the UK for the first time since "stepping back" from royal duties.

When the Queen was snapped 'giggling' at the duke

A royal occasion descended into bewilderment and chuckles after a swarm of bees descended.

How deaths of public figures can affect others

Many were saddened by the death of the duke but why do people grieve over those they have never met?