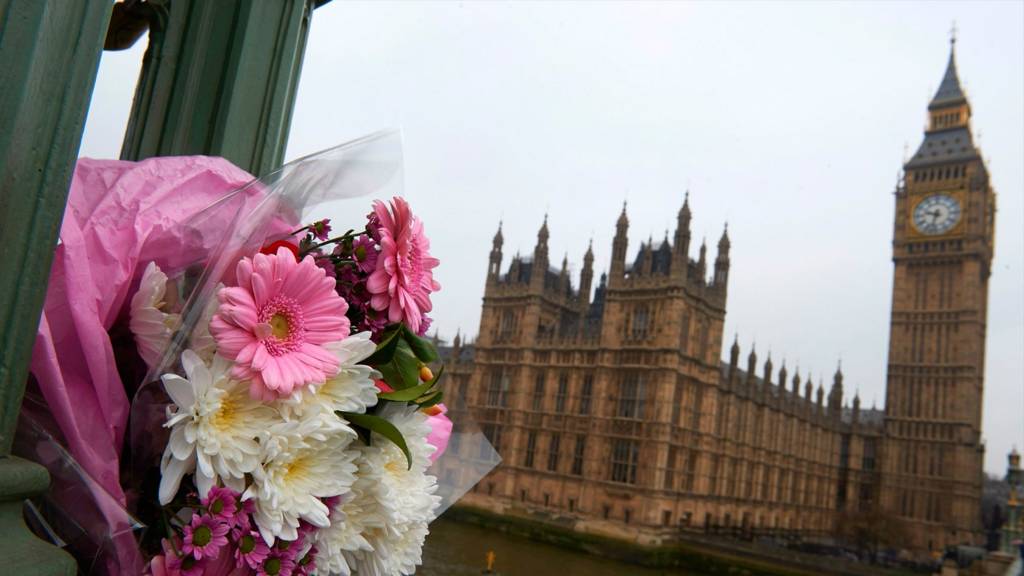 Khalid Masood is identified as the man who carried out the attack, as the death toll rises to five.

The Westminster attack suspect had been investigated by MI5, the PM reveals, as two more victims are named and eight people are held.

Security of Parliament under microscope

Review under way amid debate over whether police officers guarding Parliament should be routinely armed.

A Carmarthenshire home searched as part of investigations into the London terror attack belongs to the attacker's mother.

Who was attacker Khalid Masood?

The Westminster attacker was a 52-year-old father with a string of aliases.

A new photo of PC Keith Palmer outside Parliament emerges, taken just 45 minutes before he died.

In pictures: London mourns... and carries on

Two days after the attack in Westminster, London tries to return to normal

United Londoners: 'Nothing stops us'

The people of London show their solidarity after the Westminster attack.

The victims of the Westminster terror attack

The stories of Khalid Masood's victims reveal the diversity of London and its visitors.

MPs pay tribute to Wednesday's victims and the PM says "we saw the best and worst of humanity".

In pictures: Day after attack

Scenes from London after the terror attack in Westminster that left five dead and many injured.

Everything we know so far

Here is what we know about the terror attack in Westminster on 22 March, 2017.

The attack the UK has been preparing for

UK police have trained for an attack like this - but there are some very long hours and days ahead for investigators.

'Get under cover now!' - immediate aftermath

The moment the area around the Houses of Parliament evacuated following reports of shots fired.

'Man in black... stabbing or striking'

Journalist Quentin Letts has described seeing a man in black who appeared to strike a policeman.