New research has found the HPV vaccine can reduce cases of cervical cancer by nearly 90%.

Cervical cancer is the fourth most common cancer in women around the world, killing more than 300,000 each year.

How does the HPV vaccine protect against cancer?

The HPV vaccine protects against several types of HPV.

Studies have shown that the vaccine protects against HPV infection for at least 10 years, although experts expect protection to last much longer.

The first major study suggests it is very effective, cutting cases of cervical cancer by nearly 90%.

Published in the Lancet, it looked at what happened after the vaccine was introduced for girls in England in 2008.

Who can be given the HPV vaccine?

The HPV vaccine works best if girls and boys get it before they come into contact with HPV.

That's because the vaccine can only prevent an infection, it cannot rid the body of the virus once it has been caught.

The viruses are so widespread that immunisation has to be aimed at children before they become sexually active.

HPV (short for human papillomavirus) is the name for a very common group of viruses.

There are more than 100 different types of HPV and infections do not usually cause any symptoms - although some types can cause warts. These may appear on your hand, foot, genitals or inside your mouth.

Most people, however, will not know they're infected and their bodies will get rid of the virus without treatment.

High-risk types of HPV, on the other hand, can cause abnormal tissue growth which can lead to cancers.

Who gets HPV and is it sexually transmitted?

It is very easy to pick up, being very contagious, and is spread by close skin-to-skin contact.

In most cases people are infected for 18 months to two years.

It is not technically a sexually transmitted disease, as it is not spread by sexual fluids, in the same way as diseases such as gonorrhoea.

However it is often transmitted during sexual contact, including touching.

How widespread is the rollout of the HPV vaccine around the world?

Almost 90% of cervical cancer deaths are in low- and middle-income countries, according to the World Health Organization (WHO).

In these countries, cervical cancer is often not identified until it has further advanced and symptoms develop.

Last year, the WHO announced plans to eliminate the disease "within the next century" by achieving 90% coverage for HPV vaccination by 2030.

Over a hundred countries have now introduced HPV vaccination. 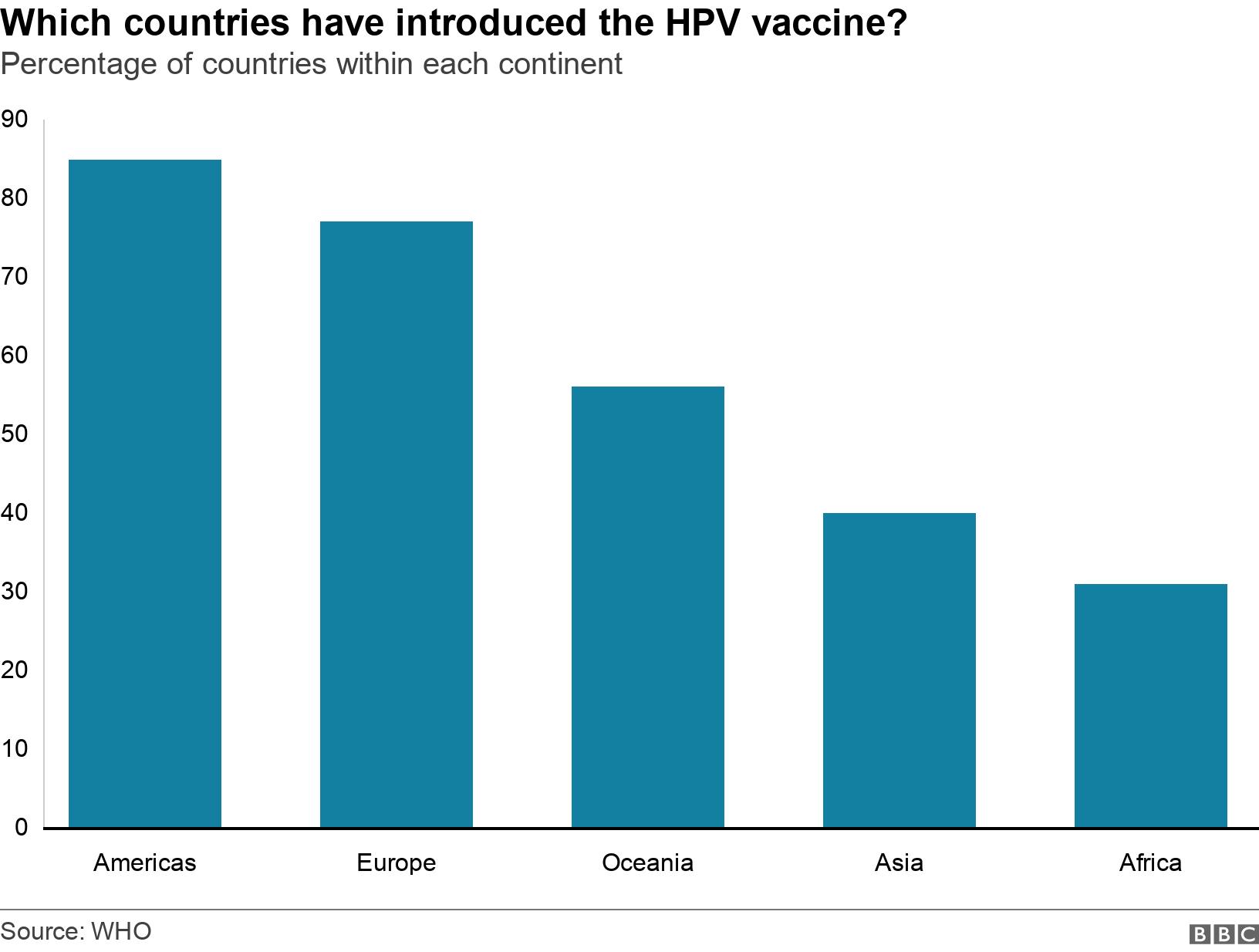 Cervical cancer is the second most common cancer among women in Africa, but it is the deadliest, the WHO says.

Inadequate screening programmes, limited access to treatment services and vaccine hesitancy all contribute to this.

Rwanda was one of the first countries in Africa to introduce a vaccination campaign. It launched a plan in 2011 to get girls vaccinated early and to introduce cervical screening for women.

In the first year it reached nine out 10 girls eligible for the vaccine, a result that experts cite as a model for other countries.

However, HPV vaccine rates remain low even in some developed countries, partly due to misinformation that it could cause infertility. Currently, less than 0.1% of eligible Japanese women get vaccinated.

How do you get the vaccine in the UK?

Two injections are given into the upper arm spaced at least six months apart.

According to the NHS, children who miss the HGV vaccine in Year 8 will be offered it in the next academic year.

Although the vaccine appears to dramatically reduce the chances of developing cervical cancer, it does not protect against all types of HPV.

So it is important that women also have regular cervical smears once they reach the age of 25.