The NHS has been one of the key focuses of the election campaign with the political parties battling it out to be seen as champions of the health service.

This should come as no surprise.

While many assumed this election was going to be largely about one issue - Brexit - the future of the NHS has actually been up there as the other big priority for voters.

Some polls even suggest it is more important.

But what separates the promises the parties are making?

The three main parties in England - health is devolved so the Westminster politicians do not control policy in Wales, Scotland or Northern Ireland - have sought to use both their pre-manifesto announcements as well as their manifesto launches to highlight their health policies.

Labour, in particular, has gone on the attack, accusing the Tories of plotting to sell off the NHS in a future post-Brexit trade deal with the US - something the Tories are insistent they will not do, even making it part of their manifesto pledges.

It all suggests there is some kind of ideological difference in the approach to the NHS.

But dig beneath the surface and what is quite remarkable is just how similar the policies actually are rather than how different.

All three parties are promising above-inflation increases to the budget for front-line care. And, importantly, in each case this is at a faster rate than has been the case since the financial crash of 2008.

What are the parties promising you?

Here's a concise guide to where the parties stand on key issues like the environment, Brexit and the NHS.

The Tories - being the party in government - had already set out their plans ahead of the election.

During 2018 they put forward a five-year spending plan which is seeing the budget rising by 3.4% a year above inflation. It means by 2023-24 there will be £149bn of funding available. 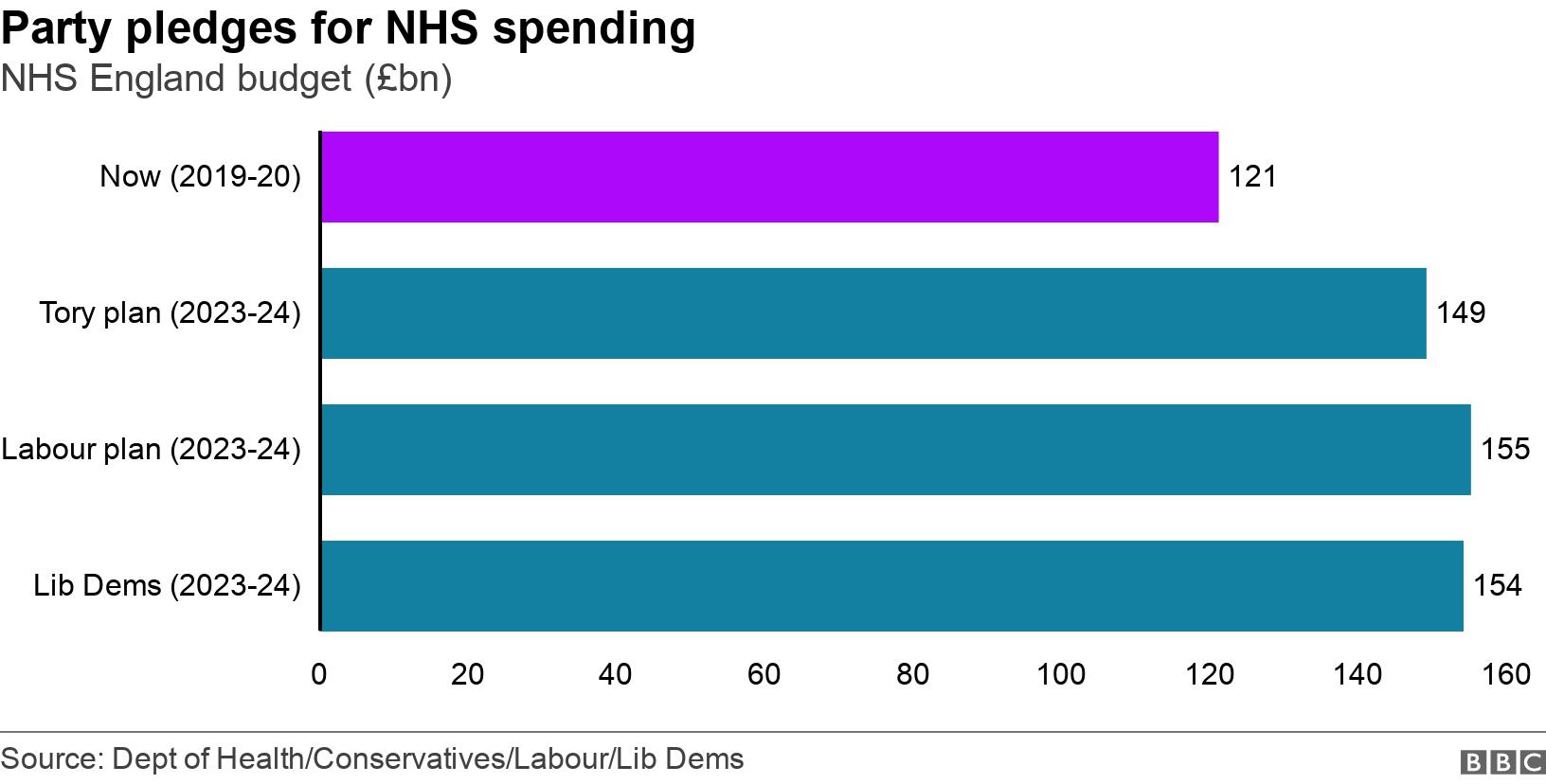 But some experts say the £6bn gap between Labour and the Tories could in fact be slightly narrower.

The Treasury - under the Tories - has already promised to help meet the rising cost of NHS pensions, and if you factor that in, the difference could be around £3.5bn.

Where is the money going?

That is enough to make an impact, but hardly points to a great division in approach given the size of the budget.

That much is clear from the sort of things that all of the parties are promising to spend their money on:

Even when there appear to be significant differences in ambition, the truth is much more nuanced.

Take nurses, for example - the Tory promise of 50,000 may seem to be more generous than the Labour pledge of 24,000. But the Tories have factored in improving retention (an important issue if you are going to grow the workforce) whereas Labour has not.

It makes determining which plan is more ambitious incredibly difficult.

But regardless of that, what is missing from all the pledges is the detail on how exactly any of this will be achieved.

Infrastructure is a big priority

This lack of detail is also apparent in other areas away from the front-line budget.

All three parties have talked about investing in buildings.

Labour is promising to increase the annual budget to over £10bn by the end of the next Parliament - it is currently £7bn.

The Lib Dems, once again, are not far behind that.

The Tories say spending will increase, but are not saying by how much.

Although, it is clear from their focus on buildings - Boris Johnson is constantly championing the 40 new hospitals he wants to see built over the next decade - that the budget will be going up.

Does it matter who you vote for?

So when it comes to the NHS, is there actually a big decision in terms of who to vote for?

At the end of the day, all you have heard during the election are promises and projections.

What matters is who can deliver - and that means making judgements about competency and which party will be best for the economy.

That in turn means looking at their policies on Brexit, tax and the nation's finances - in short deciding who in reality will have the most money to spend on health.

It is those things that will go a long way to determining the health of the NHS in the future.

The parties' manifestos in full