Antibiotics resistance 'as big a risk as terrorism' - medical chief

The danger posed by growing resistance to antibiotics should be ranked along with terrorism on a list of threats to the nation, the government's chief medical officer for England has said.

She warned that routine operations could become deadly in just 20 years if we lose the ability to fight infection.

Dame Sally urged the government to raise the issue during next month's G8 Summit in London.

Antimicrobial resistance is a global threat.

It happens when organisms are able to survive medicines aimed to destroy them.

Bacteria can become resistant to antibiotics, viruses to antivirals and parasites to drugs like antimalarials.

Dame Sally said: "If we don't take action, then we may all be back in an almost 19th Century environment where infections kill us as a result of routine operations. We won't be able to do a lot of our cancer treatments or organ transplants."

She said pharmaceutical companies needed to be encouraged to develop new drugs, because the manufacture of antibiotics was not viewed as profitable.

"We haven't had a new class of antibiotics since the late 80s and there are very few antibiotics in the pipeline of the big pharmaceutical companies that develop and make drugs," she said.

"We haven't as a society globally incentivised making antibiotics. It's quite simple - if they make something to treat high blood pressure or diabetes and it works, we will use it on our patients every day.

"Whereas antibiotics will only be used for a week or two when they're needed, and then they have a limited life span because of resistance developing anyway."

Ray, from Devon, says he is extremely concerned about antibiotic resistance.

"I have recurring Cellulitus. It is affected by bacteria. I've had seven bouts over the last two years.

"My last attack lasted for seven weeks and I had to take a combination of two antibiotics for it because the normal one my doctor normally prescribes didn't work.

"It's always in the back of my mind that next time it might not be treatable.

"We should be continuing our research into different antibiotics, but pharmaceutical companies are governed by money and politics."

Dame Sally said action was needed to overcome this "market failure" and pointed to the Innovative Medicines Initiative - an EU funded body whose aim is to promote the development of new medicines.

Dr Ibrahim Hassan, a consultant microbiologist at Wythenshawe Hospital in Manchester, said there are more cases of patients with bacterial infections resistant to antibiotics - meaning there are fewer treatment options.

"All you can hope of is a bit of holy water because you don't have too much option in terms of treatment.

"We're beginning to see that in some hospitals, patients coming in with this infection with no antibiotic that can be used to treat them."

Dame Sally's warning coincides with the publication of the second volume of her annual report which details the burden posed by infectious diseases.

Death rates for infectious diseases have declined in developed countries in recent decades due to improvements in hygiene and sanitation, widespread immunisation and effective drug treatments.

Bacterial species are divided into two large groups based on the structure of their cell wall and their response to staining with a dye.

A Gram positive results in a violet colour while a Gram negative is pink.

But the report says they still account for 7% of all deaths in England and account for one in five days off work.

It says in decades to come we risk "losing the war" against microbes - and standard surgical procedures such as hip replacements could become riskier, as would treatments that suppress the immune system such as chemotherapy or organ transplant.

Dame Sally said it was a global issue for governments, the medical profession, the pharmaceutical industry and individuals.

A simple cut to your finger could leave you fighting for your life. Luck will play a bigger role in your future than any doctor could.

A post-antibiotic future? Read moreWhat are your experiences?

She also said the over-use of antibiotics was an issue in animal husbandry, agriculture and fish farming.

She urged politicians to treat the threat as seriously as the superbug meticillin (also called methicillin)-resistant Staphylococcus aureus or MRSA.

Cases have fallen by 80% since 2003 through improved hygiene measures in hospitals. 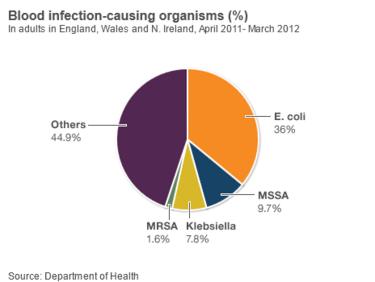 In particular, cases of E.coli and Klebsiella bacteria have increased by two-thirds in recent years and are now the most frequent cause of hospital acquired infection.

Both types of bacteria - known as Gram negative - are commonly found in the gut but can cause blood infections.

In England, Wales and Northern Ireland 99,000 cases of blood stream infections were reported in 2011-12. E.coli alone accounted for 36% of cases compared with just 1.6% due to MRSA.

The report estimates that up to 5,000 patients a a year die from Gram-negative blood poisoning each year, half with an antibiotic-resistant organism.

Dame Sally said no new classes of antibiotics had been introduced since 1987 whereas new pathogens were emerging every year, and existing bugs were developing resistance to current treatments.

A five-year UK Antimicrobial Resistance Strategy will be published shortly which will advocate the responsible use of antibiotics and strengthened surveillance.

The Chief Medical Officer said antimicrobial resistance would be put on the government's national risk register of civil emergencies - which provides guidance on potential threats such as terrorist attacks, pandemic flu and major flooding.

Dame Sally said she was shocked by the "woeful education" in antimicrobial resistance given to many medical students and doctors; she wanted to ensure fewer antibiotics were prescribed, so that they are used only when needed.

Dame Sally is not the first chief medical officer to warn of the dangers of antibiotic overuse.

In 2008 her predecessor, Liam Donaldson, urged doctors not to use antibiotics to treat colds and coughs as these are caused by viruses and do not respond to antibiotics.

In 1999, Sir Kenneth Calman made a similar plea, saying the public had a responsibility not to demand antibiotics.

First-year halls were known to be at risk and outbreaks were "inevitable", top scientist says.

Six the musical: From bedroom to Broadway (almost)