Some cancer survivors in England and Wales are living nearly six times longer than 40 years ago, figures show.

But the Macmillan Cancer Support data highlights a "woeful" lack of progress for some types of the disease, such as lung and stomach cancer.

The charity has calculated median survival times - the time taken until half of those diagnosed have died.

The Department of Health says it is giving high priority to cancers where survival rates have not improved.

Macmillan Cancer Support carried out an analysis of survival times and estimates for 20 cancers going back four decades, drawing on research by the London School of Hygiene and Tropical Medicine.

The charity says it would expect the figures to be similar for the whole of the UK.

Survival is usually expressed as the number of people reaching a particular milestone, such as one, five or 10 years after diagnosis. 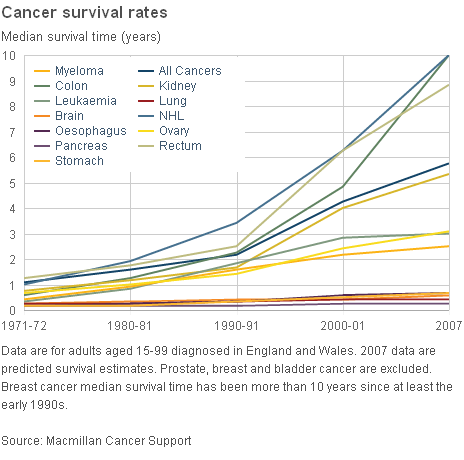 "Finally we can answer the big question: 'How long have I got?'"

The figures show an improvement in overall median cancer survival, from one year for patients diagnosed in 1971-72 to nearly six years for those diagnosed four decades later.

Six of the cancers now have median survival times of more than 10 years. The biggest improvement is for colon cancer, with a 17-fold improvement.

There is a 10-fold increase for non-Hodgkin lymphoma.

Dena Hutchings, who is 42 and from Sheffield, was diagnosed with the disease nearly five years ago. Even though her chemotherapy pushed her into early menopause, she still feels fortunate.

"It could have been a worse case cancer but fortunately for me it turned out to be lymphoma. It is one of the more treatable and curable cancers."

However the data also shows that for nine cancers, median survival time is still three years or under.

It indicates little improvement in 40 years for lung, brain and pancreatic cancer.

Adrian Antwis, who is 40 and also from Sheffield, was diagnosed with lung cancer in spring this year.

He was told he had just months to live. He hopes the huge variations highlighted by the new figures will act as a spur for research into effective new treatments for cancers such as his.

"I'd willingly go through months and months of treatment - of being sick - knowing that I'd have a chance. But there's no treatment at all, so it's something you've got to accept, and get on with it."

Macmillan Cancer Support says although it is good news that more cancer patients are living longer, many are struggling with long-term health problems caused by their treatment.

These include fatigue, infertility, and damage to the lungs and heart. Some cancer survivors also need psychological support.

The charity says this poses a huge challenge for the NHS in planning better services.

Macmillan's chief medical officer, professor Jane Maher, says the response from governments to this challenge has varied across the UK.

"The Northern Ireland initiative has started and we're hopeful that very good things are going to come out of it. Scotland is just about to kick off with a survivorship initiative.

"We're hoping that Wales will follow the other three nations to take forward a survivorship initiative."

The Care Services Minister for England, Paul Burstow, said the government was working with Macmillan to help cancer survivors.

"It is essential that cancer survivors receive the support they need to cope with any long-term effects of their cancer."