At least 27 people have drowned crossing the English Channel by boat.

Record numbers of migrants have attempted the journey in recent months.

The UK sends Border Force ships out to spot small boats - but there is little they can do other than rescue people in danger.

Earlier this week France announced an extra €11m (£9.3m) worth of equipment and 100 vehicles to tackle smuggling along the coast.

France has cancelled this weekend talks on the issue after Boris Johnson published a letter to President Macron. In it the PM said France should take back migrants who have crossed the Channel.

France insists it's doing all it can to stop crossings. Interior minister Gerald Darmanin said the French authorities stopped 671 migrants on Wednesday alone.

Calais MP Pierre-Henri Dumont told the BBC it wasn't realistic to think police officers could patrol 200-300km [125-186 miles] of coastline 24 hours a day, given "it only takes five to 10 minutes to take a boat and fill it with migrants".

The UK has pledged to give France €62.7m (£54m) during 2021-22 to help increase police patrols, boost aerial surveillance and strengthen security at ports. It's being paid in instalments, which have started.

The two countries have also set up a joint intelligence group, which has contributed towards 94 investigations.

There have been 65 small boat-related prosecutions in England since 2020 - and nearly 300 arrests in France.

How many migrants cross the Channel?

In November more than 1,000 people arrived in a single day, for the first time.

More than 25,000 people have crossed the Channel so far this year - but that figure doesn't tell the whole story.

Nearly 45,000 people sought asylum in the UK in the most recent year for which we have data. So, the number who cross the Channel in boats are only part of the total.

The UK receives less than half of the asylum applications which France gets.

Most refugees stop in the country bordering their own: there are about 3,700,000 displaced Syrian people in Turkey. The UK has taken in less than 1% of that number through resettlement or asylum from Syria since 2014.

What happens to migrants who are found in the channel?

If migrants are found in UK national waters, it is likely they will be brought to a British port.

If they are in international waters, the UK will work with French authorities to decide where to take them. Each country has search-and-rescue zones.

The distance between Dover and Calais, where many migrants cross, is just 20 miles, and none of it counts as international waters.

Once migrants are in the UK, they are usually taken to short-term holding centres.

Can migrants be sent back to France?

However, an EU-wide law called Dublin III, allows asylum seekers to be sent back to the first member state they were proven to have entered.

Between 1 January 2019 and 1 October 2020, 231 migrants who crossed the Channel were returned to mainland Europe using Dublin III.

However, the UK is no longer part of this arrangement since leaving the European Union. The UK has not agreed a scheme to replace it, making the transfer of migrants more difficult.

Immigration minister Tom Pursglove told MPs on 17 November that only five people had been returned to mainland Europe so far in 2021.

Could migrants in the Channel be pushed back?

Priti Patel has authorised Border Force officials to turn back boats carrying migrants to the UK in limited circumstances.

"Push back at sea" is a tactic that is used in Australia. However, France has not co-operated with the UK's approach.

As soon as the boats leave French waters - which the UK authorities cannot enter without France's consent - and enter the UK's, they are subject to the protection of UK law, says Prof Andrew Serdy, a maritime law expert.

"If France doesn't want to take them back once they have left, it cannot be forced to do so and a stand-off ensues."

A boat can also only be pushed back if it's clear that doing so won't endanger lives, which could be difficult to prove with a small dinghy.

But speaking in the House of Commons, the home secretary said she "had not ruled anything out" and gave the example of "Greece in terms of push-backs", adding that the Greeks use the military including special forces as well as the coastguard to achieve this.

What are the current rules for claiming asylum in the UK?

Many of the migrants crossing the English Channel claim asylum once they arrive in the UK. Asylum seekers hope to receive refugee status, meaning they can stay.

They must prove they cannot return to their home country because they fear persecution due to their race, religion, nationality, political opinion, gender identity or sexual orientation.

Their asylum application can include their partner and any children under 18, if they are also in the UK.

Decisions are made by a caseworker. They consider things like the country of origin of the asylum seeker, or evidence of discrimination.

This is supposed to be done within six months, although most wait longer.

What happens if an application is successful?

Anyone granted refugee status can remain in the country with their dependants for five years. After that, they can apply to settle in the UK.

Alternatively, they may get permission to stay for other humanitarian reasons. This means they do not qualify for refugee status but are nevertheless at risk of serious harm on return to their country of origin due to:

Family members not already in the UK can apply to join those with refugee status or humanitarian protection.

They may also be given permission to stay for other reasons - for example, if they are an unaccompanied minor or a victim of trafficking. How long they can stay will depend on their situation.

About 10,000 were offered refugee status or other protections.

Both of these figures were down on the previous year, probably due to the impact of coronavirus. 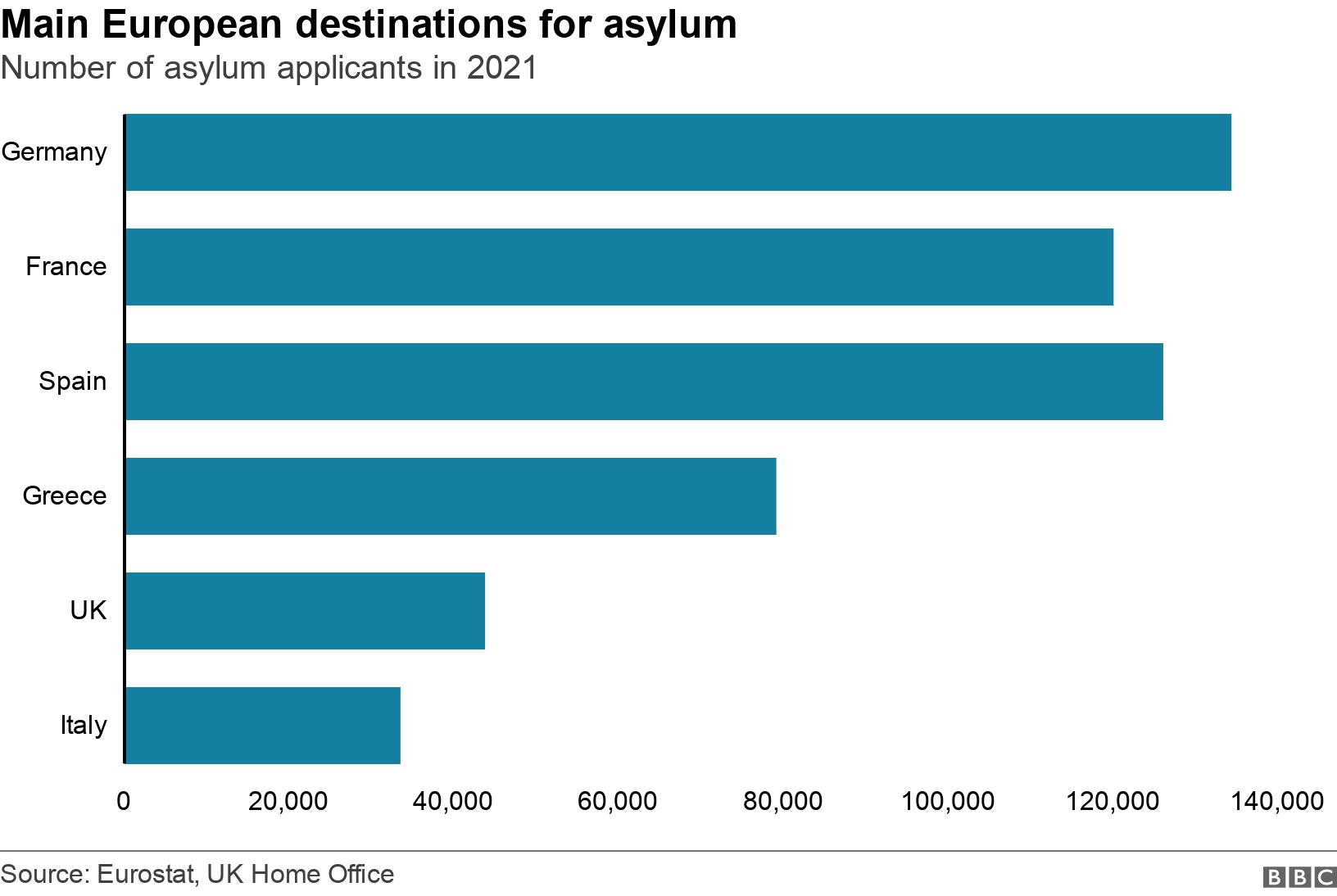 While an asylum claim is being processed, people are given financial help towards their living costs.

Asylum seekers aren't allowed to work - or take formal unpaid positions such as internships - unless they have waited more than a year for a decision. They can, however, volunteer to help charities or community organisations.

This controversial rule is aimed at preventing people applying for asylum as a route to work in the UK. Critics say it prevents refugees integrating into communities and wastes the skills they have brought with them.

Asylum seekers cannot choose where they live. Most are initially placed in hostel-type accommodation before moving to longer-term housing.

Much of this accommodation has previously been criticised by the immigration watchdog.

Asylum seekers can get a cash allowance of £39.63 per week for each household member, with extra support available for vulnerable groups such as children or pregnant women.

Asylum seekers with an active application are entitled to free healthcare and children must attend school.

What happens when an asylum claim is rejected?

If asylum isn't offered and no other reason to stay in the UK is accepted, the person will be asked to leave the UK, either voluntarily or by force.

They can appeal against the decision. Around 30% of appeals were accepted between 2004 and 2020, meaning those individuals were allowed to stay.

Migrants can receive legal aid for these appeals, which can sometimes take years, as well as continued financial and housing support.