The rights of transgender people have been in the spotlight in recent years.

The government has reduced the cost of applying to change legal gender, but has not dropped medical requirements.

What does transgender mean?

A trans person's gender identity is not the same as the sex on their original birth certificate.

As babies, our sex is recorded as male or female, based on physical characteristics. (There are some people born with chromosomal or other physical differences that can make this a complex judgement. They may be referred to as intersex.)

Gender is based on the behaviour, expectations and outward presentation typically considered to correspond to someone's sex.

Gender identity is based on self-perception - how we see and describe ourselves, and how we ''present'' to the world.

For example, someone whose sex is female might identify as male, or vice versa.

People who are non-binary do not consider themselves to have a solely male or female gender identity, or take a different approach to gender.

People who experience a difference between their sex and gender are referred to in medical terms as having gender dysphoria - and sometimes describe themselves as transgender, or trans.

What changes can transgender people make?

Many transgender people live according to their gender identity, dressing and presenting to the world in a way matching that identity and being referred to by their chosen name.

They may also want to apply for changes such as having their birth certificate, passport or driving licence altered.

Some also decide to physically change their body to correspond with their gender identity.

This can involve taking hormone medication and having voice therapy. Some go on to have surgery.

These social, physical and legal changes are known as transitioning.

What can you legally change?

Under the Gender Recognition Act 2004, UK adults can legally change their gender if they meet certain criteria. This means their acquired gender can be recorded on their birth and marriage certificates.

About 95% of applicants go down a standard application route, the main requirements of which are:

Many trans people have said they find the system intrusive, costly, humiliating and bureaucratic. Fewer than 5,000 people had legally changed gender by 2018, leading the government to set up a public consultation.

Although it isn't known how many trans people there are in the UK, the government estimates between 200,000 and 500,000 people identify in this way.

While the Gender Recognition Act created broadly the same system across the UK, the consultation covers England and Wales. The Scottish government has published a draft bill that removes the requirement for a medical diagnosis, but reforms have been halted during the coronavirus pandemic.

The consultation does not change how the gender recognition system operates in Northern Ireland.

There was speculation that the government might scrap the medical diagnosis element for England and Wales and allow people to legally change gender through self-identification.

This suggestion caused heated debate. The consultation was extended because of the high volume of responses, with at least 53,000 submitted.

The government responded to the consultation, saying it believes the Gender Recognition Act strikes the right balance between legal checks and support for people who want to change their legal gender.

But it said the application process needed to be made ''kinder and more straightforward". The government has reduced the cost of applying to £5 and says it is working to move the process online.

What are the rules around women-only spaces?

There has been debate about the rights of transgender people and there is a range of views as to how society can best balance the needs of different groups.

Much of the debate has focused on access to women-only spaces such as toilets, changing rooms, domestic violence refuges and prisons.

Under the Equality Act 2010, no-one should be discriminated against because they are transgender.

A person does not need to have undergone any specific treatment or surgery to be protected from this discrimination. Equality and Human Rights Commission guidance states that "changing your physiological or other gender attributes is a personal process rather than a medical one".

But single-sex service providers can choose to exclude transgender people where there are ''proportionate means of achieving a legitimate aim''.

An example given by the Equality Act is that organisers of group counselling for female sexual assault victims could exclude a trans woman if they judged that clients would be unlikely to attend the session if she was there.

However, refusing a trans woman entry to a pub's female toilet is likely to be unlawful. 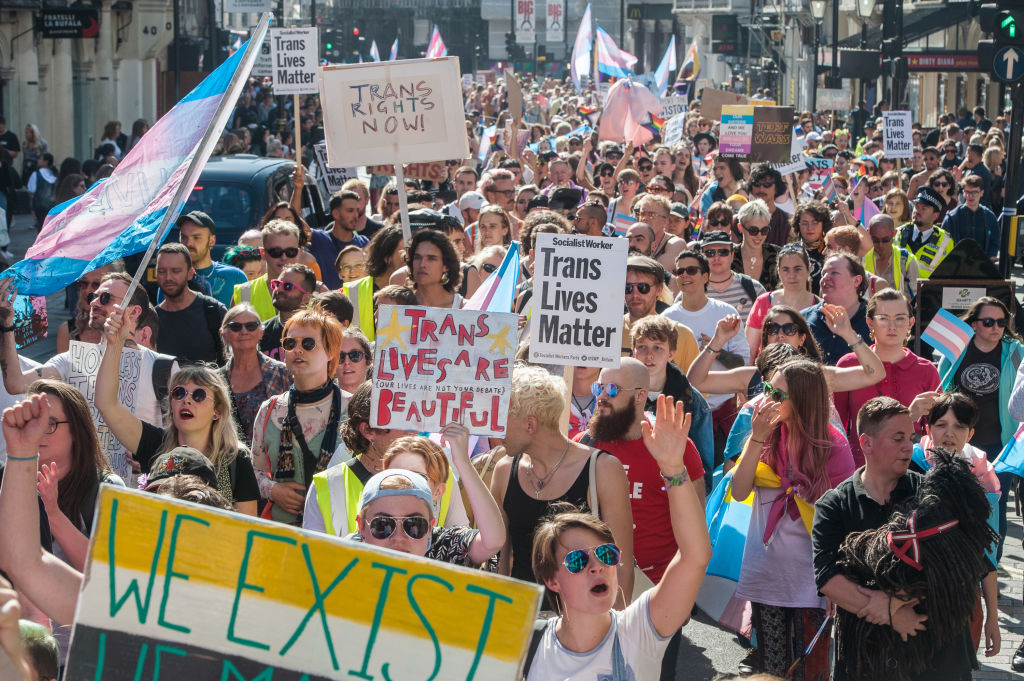 In England and Wales, about 95% of applicants go down the ''standard'' application route, in which currently:

Legally changing your gender does not guarantee entry to single-sex spaces, the government says, and the consultation would never have resulted in these exemptions being removed.

However, some have raised concerns about self-identification and suggest the law is not clearly understood by service providers.

They also argue women's wider sex-based rights are under threat.

''Women have fought for sex-based protections and services, female spaces and female associations, and schemes to promote women in business, politics and society. These are all under threat from the concept of self-identification.''

But others say the rights of transgender people should never have been up for discussion.

In an article headlined "Why I'm no longer debating trans rights", author Juno Dawson says the current ''moral panic'' belies the fact that ''transgender people have been around for as long as history has been recorded''.

''No trans person should have to explain, on behalf of an entire community, that we pose no danger. It should go without saying.''

Some say removing the medical requirement would have served to make trans people's lives easier, and had little impact on the majority of single-sex spaces, which rarely require someone to prove they are a man or a woman.

Another area where there has been controversy is the treatment of children who question their gender identity.

These feelings are "reasonably common", the NHS says. For a small percentage, they will persist, and may lead to a referral to the under-18s Gender Identity Development Service (Gids).

In some cases, the service may prescribe puberty blockers. These delay the onset of puberty, but the NHS says little is known about their long term side effects.

Gids staff have voiced concerns some patients were given treatments too quickly, allegations the NHS trust running the service strongly denies.

Applicants must be over 18 to obtain a gender recognition certificate, although this will be lowered to 16 in Scotland under proposed changes.