In his first Budget, Chancellor Rishi Sunak unveiled a £12bn package to help the country through the coronavirus outbreak.

He also outlined spending pledges that will add up to £18bn next year when combined with measures from last year's Spending Review.

We answer some of your questions on the Budget.

What benefits were announced for the self-employed who get coronavirus or have to self-isolate? Simone Tyler

People who are not eligible for sick pay, particularly the self-employed, will be able to claim Employment and Support Allowance (ESA) from day one of "illness" rather than day eight.

ESA is paid to those who are too sick to work, provided they meet certain conditions. It is worth £73.10 a week, or £57.90 for the under-25s. The complexity of this benefit may mean this change is unlikely to affect a lot of people.

Councils will also have access to a hardship fund to help vulnerable people in their area.

However, many self-employed people face a higher tax bill from April, when the so-called IR35 rule is extended to the private sector. That could mean thousands of contractors and freelancers will pay more tax.

Not having the floor means they will be able to claim for time they spend off work due to sickness.

Mr Sunak said they would not need to attend a job centre, and could apply on the phone or online instead.

The government has also announced a new £500m fund to support economically vulnerable people - this will be allocated by local authorities.

Will there be any help for companies with more than 250 employees around coronavirus? Brian Donaghey

The burden of sick pay has fallen on employers, and it still will, except for those with fewer than 250 employees.

The government would argue that other policies - such as loans and the Bank of England's rate cut - will help some of the bigger businesses.

There is also an argument that the biggest companies have cash reserves to deal with unexpected financial shocks of this kind.

Where is the money coming from? Rosie Ferris

The money being spent in the Budget mostly comes from borrowing, with some from a few small tax increases.

The Office for Budget Responsibility said borrowing would climb to a six-year high by 2022, to fund what it called the biggest Budget giveaway since 1992.

The government expects to borrow almost £100bn more in this Parliament (before mid-2024) than was expected the last time there were any forecasts.

That figure does not include £12bn to be spent on getting the country through the coronavirus outbreak.

The Treasury documents say that money will be accounted for in the next Budget, in the autumn. 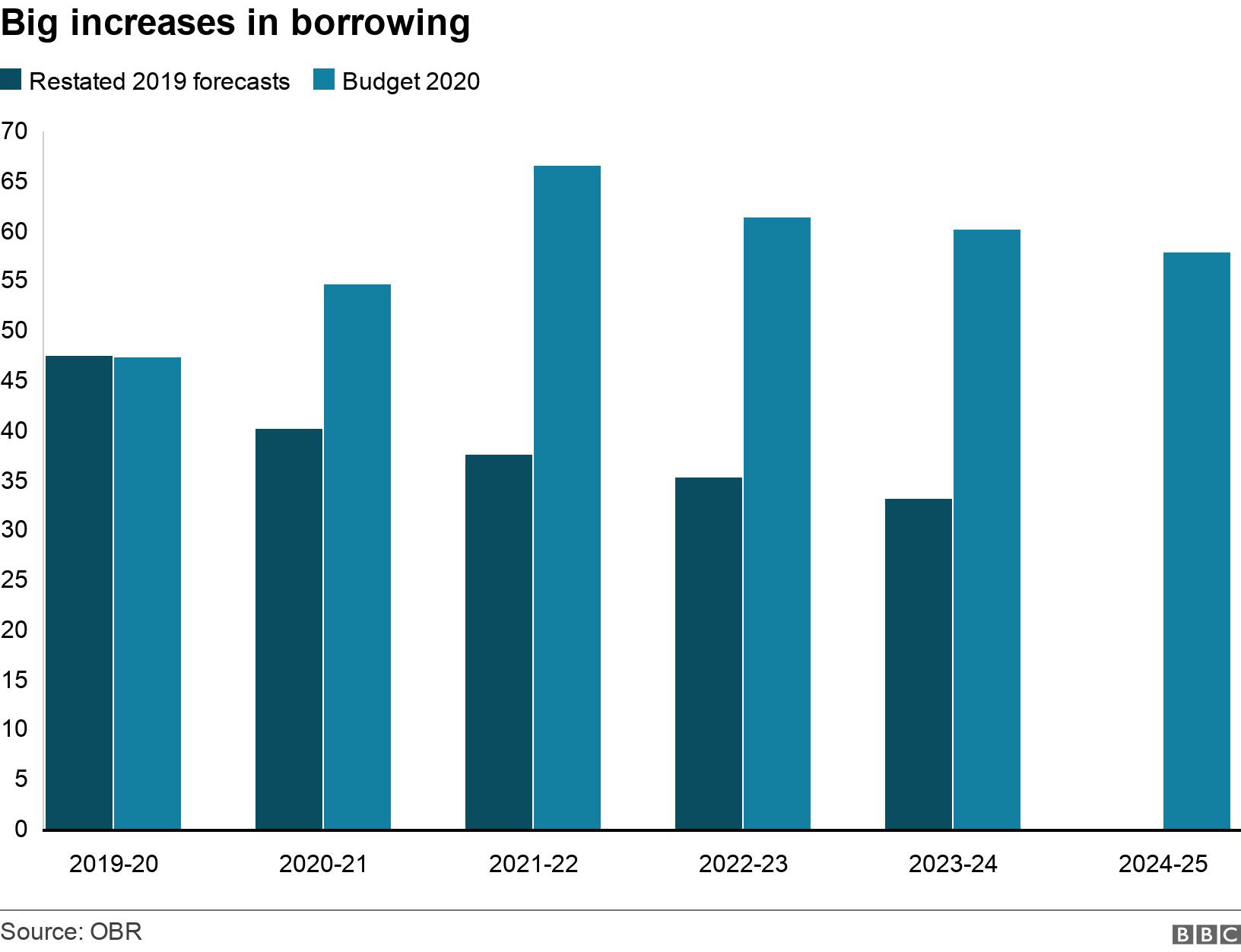 Was there any mention of the state pension for the elderly? HE Dobson

What is being done in the budget to tackle the climate emergency? Susan Nicholson

Various measures were pledged in the budget to protect the environment.

A plastic packaging tax will come into force from April 2022, while manufacturers and importers whose plastic products have less than 30% recyclable material will be charged £200 per tonne to recycle it.

Subsidies for fuel used in off-road vehicles - known as red diesel - will be scrapped "for most sectors" in two years' time, but they will remain for farmers and rail operators.

An emergency relief fund of £120m will be allocated for communities affected by this winter's flooding, along with another £200m for flood resilience. Total investment in flood defences will be doubled to £5.2bn over the next five years

And a £640m "nature for climate fund" will be set up to protect natural habitats, while 30,000 hectares of new trees will be planted over five years.

What is the "fiscal loosening" of £18bn to support the economy? Charles Archer

In addition to the measures to support economy during the coronavirus outbreak, the chancellor also outlined an £18bn programme of additional spending in 2020-21, much of which had already been announced in last year's Spending Review.

Other giveaways include extra infrastructure spending, the national insurance tax cut and a further freeze on fuel duty.

What questions do you have about the budget?