This highly original South Korean film, which won four Oscars, may help focus voters' minds when it comes to ensuring greater diversity in the future.

It has certainly made the awards more memorable.

Here's how the ceremony played out, both on the (very wet) red carpet and in the press room.

1. The Oscars were more diverse than expected

There were gasps of delight in the press room when Bong Joon-ho's Parasite won best director and then best film.

Many had thought Sam Mendes' 1917 was a shoo-in, but there's been a groundswell of support for Parasite, the South Korean social comedy thriller, which won last year's Palme D'Or at Cannes.

For an Oscars criticised for a lack of diversity, this is a positive outcome - the Academy has landed its first non-English language film taking the top prize.

For anyone who hasn't seen it, the dark film depicts the brutally symbiotic relationship between two families - one wealthy and the other impoverished.

Bong Joon-ho told the press room his win was "crazy", adding: "For this film I just did what I've always done with great artists and all my actors - but we've had these amazing results."

The film-maker had previously described subtitles as a "one-inch barrier" but he revised his opinion on Sunday, saying that social media and YouTube meant, "we're all connected [and] a foreign language film doesn't really matter".

It follows the story of an African-American father who must style his daughter's hair for the first time, focusing on their relationship.

Film-makers Matthew A Cherry and Karen Rupert Toliver brought DeAndre Arnold, the Texas teen suspended from school for having for dreadlocks, to the ceremony with them.

Toliver spoke to the press room about the "policing of hair", and said: "Black hair is very close and personal to us, so freeing black hair is freeing ourselves.

"We want to be able to freely walk the streets - with our hair free. Hopefully we can make social change."

"I dedicate this to all the Indigenous kids all over the world who want to do art and dance and write stories," he said.

After a string of decidedly funny speeches during awards season, such as naming his Bafta "Harry" because he was excited to take it back to the US, Brad Pitt's Oscars acceptance was something of a gear change.

"They told me I only have 45 seconds up here, which is 45 seconds more than the Senate gave John Bolton this week," Pitt said referencing the US Senate's refusal to call witnesses at President Trump's impeachment hearings.

Pitt lightened up after that, praising his Once Upon A Time In Hollywood co-star Leonardo DiCaprio, saying "the view's fantastic" as he rode on the lead actor's "coat tails", and making heartfelt comments about his children and parents.

But in the press room, he said made no apology for taking a political stance, saying: " I was really disappointed with this week," adding: "It's a sad day and I don't think we should let it slide - I'm very serious about that."

He added that, despite rumours he'd used a speechwriter, "I definitely write them. I have some friends who help with the laughs but it's got to come from the heart.

"Historically I've always been really tentative about speeches - they make me nervous - so this round I thought I'd put some real work into it and get comfortable, so I put some effort into that."

After so much recent press exposure, Pitt said: "Right now I think it's time to disappear for a while and go back to making things."

No sooner have you won an Oscar than you're wanting to give it away, at least if you're Laura Dern, Bong Joon-ho or Sir Elton John.

Dern, who won best supporting actress for Marriage Story, told the press room: "If I could give this Oscar to [Little Women director] Greta Gerwig I would do it right now, and to [The Farewell director] Lulu Wang."

Both women failed to make the best director shortlist, with five men nominated instead.

Dern added: "There are great films by women. We should focus less on the lack of accolades, and more on the business and people and giving money to more diverse voices."

When Bong Joon-ho won best director, he paid tribute to his fellow nominees, and said: "If I had a Texas chainsaw and could cut this into five, I would. I would give a piece to each of you."

Having just won an Oscar for their song (I'm Gonna) Love Me Again, Sir Elton immediately dedicated his trophy to writing partner and fellow Oscar-winner Bernie Taupin in the press room.

"He starts the process. Without him I'm nobody, without him I can't start the journey. I wanted to get an Oscar for everyone involved in the film."

4. The Obamas' personal touch made all the difference

American Factory, directed by Julia Reichert and Steven Bognar, is the #Oscar-nominated documentary from Barack and Michelle Obama's production company. Julia says both the Obamas wrote her a hand-written letter when she was diagnosed with cancer “which made me want to live” pic.twitter.com/dY1yXzJ3U5

Julia Reichert won an Oscar for the documentary American Factory while undergoing chemotherapy as she battles cancer at the age of 73.

Her film was backed by Michelle and Barack Obama, and she said the former first couple had sent her meaningful letters during her treatment.

"It meant so much to me, because I admire them both so much, that they would take the time to hand write, and it wasn't just 'get well soon', it was real thoughts," she told BBC News.

"That made my whole week - makes you want to survive."

So some men on a podium are poking the huge pools of water gathering in the plastic ceiling over the red carpet - they’re forcing the water to com splashing down. There’s a lot of it. #Oscars pic.twitter.com/TmXaZJj9lu

Let’s hope everyone has an umbrella! #Oscars pic.twitter.com/AmdPuVdW3q

Clutching her Oscar, which was never really in doubt, Renee Zellweger told the press room her parents would be dancing around the room together to celebrate her win.

She also spoke about the process of transforming into the troubled and fragile Judy Garland, saying: "The only thing I would do by myself for this would be to sing in the car while trying to drive down the 405 bypass here in the traffic.

"Anyone who knows the 405 knows that's a lot of time to practise."

Joker composer Hildur Guðnadóttir was the first woman to win for original score since Anne Dudley won for The Full Monty in 1998.

She said: "To the girls, to the women, to the mothers, to the daughters who hear the music bubbling within, please speak up, we need to hear your voices."

Meanwhile, Sigourney Weaver told the audience of another significant milestone: "Tonight we want to celebrate for the first time in the Oscars' 92-year history, a female conductor, Eimear Noone, will be leading the orchestra finally."

Speaking to the BBC last week, Noone said she was relieved not to have the "nasty job" of playing people off-stage if their speeches over-ran.

8. What was going on with Sandy Powell's suit?

Costume designer Sandy Powell, #Oscar-nominated for The Irishman, is getting stars to autograph her suit. She’s selling it to raise funds to save Derek Jarman’s cottage. pic.twitter.com/YegxdVehkG

So now you know.

James Corden and Rebel Wilson came on stage dressed as their characters from Cats.

"As cast members of Cats, nobody understands more than us the importance of good visual effects," they deadpanned. The film has been slated by critics, under-performed at the box office and been derided on social media for - its visual effects (aka "digital fur technology").

Me watching #CATSmovie: WHY human faces and human hands? Why so small? What is Judi Dench’s fur coat made of? How do they poop? How did I get here? Why so boring? Who is responsible for this? What hath cat-manity wrought pic.twitter.com/z4b0ysQ800

This isn’t a joke: CATS was rushed into theaters before being finished so a new version is being sent to theaters with updated effects. How do you know if you have the old version? Look for Judi Dench’s human hand, wedding ring and all. pic.twitter.com/VDUOevePU9

On a personal note, I last covered the Oscars in LA in 2005, so what has changed? Surprisingly little in terms of the ceremony.

This year it was hostless, but the opening monologue came from Chris Rock and Steve Martin. Back in 2005 the host was... er, also Chris Rock.

The nominations were more diverse in 2005, with Jamie Foxx getting two for Ray and Collateral. Aside from the Oscars, Halle Berry collected her Razzie in person.

Here's a quick look at how the two ceremonies differed. 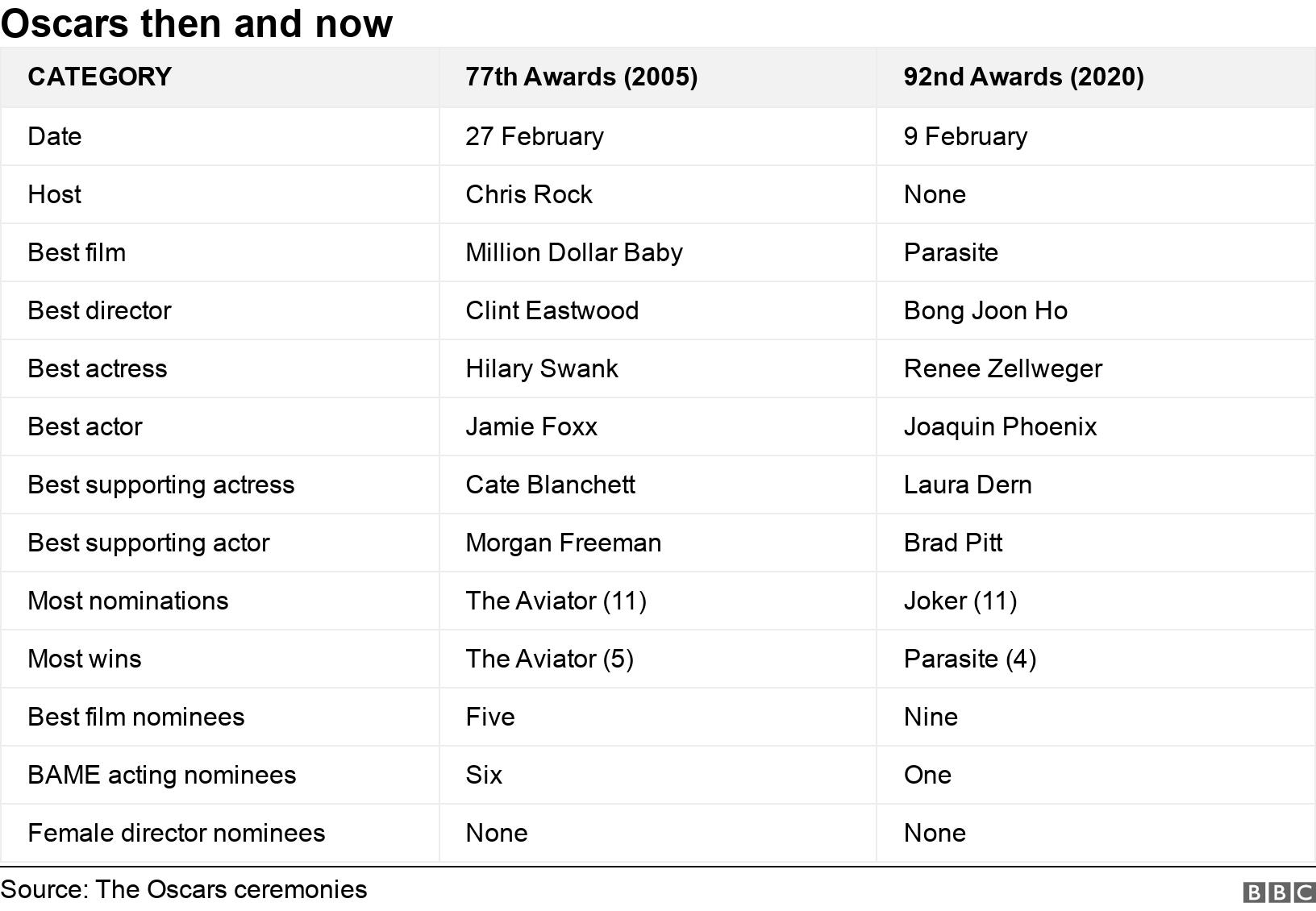