This year's Bafta and Oscar nominations have annoyed a lot people for featuring, as they do, a line-up in the main categories (Best Film, Director, Actress, Actor, Supporting Actress and Actor) that has been seen by some to be as about as diverse and textured as a bowl of watery soup.

It is reasonable to say that the two national film academies have developed a Mr Bean-like capacity for stepping on the most conspicuous banana skins and landing themselves in a heap of stinking opprobrium.

This time around they've excelled themselves by successfully upsetting both the #OscarsSoWhite and Time's Up camps, which have complained about a men-only directing shortlist, and acting categories that feature almost exclusively white performers.

Of the 35 individual nominations in the main award sections (39 if you include the extra four films the American Academy has included in its Best Picture grouping), all but three are identical on both shortlists.

Ironically, one of those not doubling-up is the English actress Cynthia Erivo (Harriet) - the only black actor to be recognised on either side of the Atlantic. She received an Oscar nod but was ignored by her home team at Bafta, which only last year picked her out as a "rising star".

Have the 6,700 voting Bafta members and the 8,469 at Academy of Motion Picture, Arts and Sciences made a total Horlicks of this year's shortlists? Have they overlooked worthy films and talented actors and directors, or have they chosen the best from what was on offer?

This is a subjective matter, with individual tastes informed by experience and perspective, which is why a diverse membership is important if you want more than the usual suspects cropping up each year. If that happens (and it's worth noting there's been a reasonable range of winners in recent years - unless you happen to be a female director) the whole charade will become intellectually and artistically obsolete.

I'll put my cards on the table.

IMO the 2020 awards season line-up is conservative and cock-eyed. It lauds several films that are standard four-star movies (Joker, The Irishman, Little Women, Once Upon a Time... in Hollywood) with others that are no more than three-star (Marriage Story and 1917).

My beef with the nominations isn't about gender or race (although both remain a serious issue across the arts in terms of recognition and opportunity), but how mediocre movies have been recognised at the expense of some truly excellent films and performances. I'm not talking about one or two anomalies, there are more misses than an England football team taking part in a penalty shoot-out. (The Golden Globes are not included as they are structured differently and are not voted for by members of a national academy.)

Parasite and Jojo Rabbit are worthy contenders, and should be battling it out with The Farewell, Queen & Slim, and Uncut Gems for Best Film.

You might well disagree, others have in the past.

A year or so ago a middle-aged man approached me on the London Underground, paused, stared, and then said cryptically, "You owe me £16". "Why?" I asked. "Shape of Water" he said, and walked off.

At least he gave it a chance. Which is more than either academy appears to have done for many-a decent movie this year.

The 2020 awards season feels reminiscent of France in 1863. Then, its official fine art academy rejected so many avant-garde painters from its all-important Paris Salon, that Napoleon III - fearing another uprising - decided to hold an alternative, concurrent exhibition called the Salon des Refusés. It was a popular success (although many came to laugh at the work on show), which would change the course of art forever. It heralded a new age, a new order, and a new way of looking, encapsulated in Édouard Manet's magnificent Le Déjeuner sur l'Herbe (1863), which was then derided by an establishment that now accepts it as a masterpiece.

And so, in the spirit of 1863, based on the movies I've seen and taking into account would-be nominees cited as overlooked by other critics (in the spirit of Napoleon III), I offer you an alternative combined Bafta-Oscar shortlist for the main categories in the… Awards des Refusés: 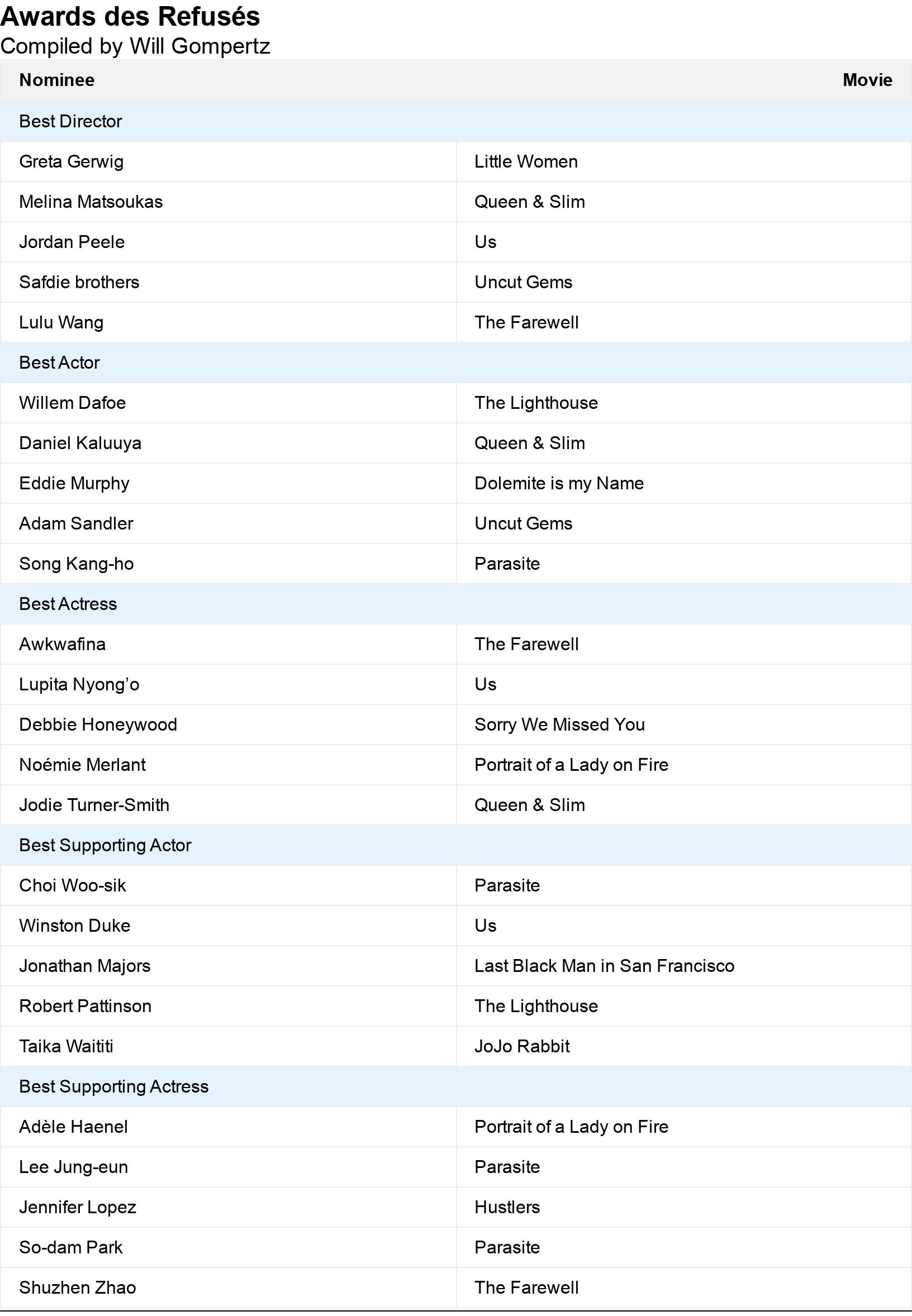 I know which awards show I'd rather watch and whose speeches I'd rather hear.

Recent reviews by Will Gompertz