At the Academy Awards, size matters. In the history of the Best Picture race, running times suggest it is more a marathon than a sprint - slow and steady frequently wins. Which raises the question, is the 91-minute space thriller Gravity simply too short to be named Best Picture?

Quick quiz question - it's on movies, and it's a two-parter. What are the longest and shortest films to win the Oscar for Best Picture?

While most people might have a decent chance of guessing the former, correctly identifying both arguably deserves an award itself (keep your acceptance speech short, please, or you'll be drowned out by the orchestra).

"After all, tomorrow is another day," goes the closing line of the longest ever winner, Gone with the Wind, by which stage audiences can be forgiven for wondering if it is indeed tomorrow by now.

The 1939 classic clocks in at a couple of minutes under four hours, and there is a multiplex's worth of other contenders you might reasonably have considered: Lawrence of Arabia, Ben-Hur and The Godfather: Part II are all 200 minutes or over, with numerous other Best Picture winners around the three-hour mark.

Meanwhile, most people would be likely to struggle to even offer an educated guess at the shortest Best Picture.

That's not only because Marty (released in 1955), which runs at just 90 minutes, is largely forgotten these days, but also because cinema's ultimate prize has been awarded to just two other films under 100 minutes: Annie Hall (1977; 93 minutes) and Driving Miss Daisy (1989; 99 minutes).

Gone with the Wind's triumph over The Wizard of Oz recently featured in Empire magazine's rundown of Oscars injustices, though writer Phil de Semlyen admits the former film could actually be seen as the "archetypal" Best Picture winner.

Adaptations of respected literary works, biopics of historical figures and "issue" films have all tended to fare well. And, since the largest block of voters is comprised of actors, so too have movies featuring big, starry performances.

"The academy members have got bladders like the rest of us - I'm not sure they hanker for the long movies," De Semlyen says. "It's maybe just that those long films have that sweep that Oscar likes.

"There is a slight self-consciousness" to the academy's tastes, he adds. "It's how they want to be portrayed to the movie-watching world."

While running times generally are thought to average between 90 minutes and two hours, the average from 85 years of Best Picture winners is considerably longer, at almost two hours and 20 minutes.

"They tend to be films that feel kind of weighty or epic," says Helen O'Hara, of Empire magazine, for which "you have to allow a certain amount of time to do your world-building".

Gravity is a world away from these films in many respects, with its tiny cast, limited dialogue, and a running time that would allow two viewings in the time it takes to watch, say, Gandhi - with even a few minutes to spare in between to give your 3D glasses a good polish.

It has been praised in reviews as "admirably concise", for its "purity, clarity, brevity and, above all, simplicity", for "storytelling as simple as its visuals are complex"; all very well, but attributes suggesting the antithesis of all those Oscars-conquering behemoths.

Gravity risks being seen as not weighty, the weight of 85 years of evidence would suggest - as lacking, well, gravity.

O'Hara describes it as "an incredible achievement", highlighting that the film-makers spent years first perfecting the technology they needed to depict zero-gravity before being able to make the film.

But films that are heavy on visual effects tend to be less respected and their achievements less trusted by the academy than more traditional films, O'Hara says. It may be for similar reasons that no animation has ever been Best Picture.

"The fact that it is a technical masterpiece counts against it," O'Hara says. "Innovation is not what wins you Oscars."

So, despite Gravity's critical and commercial success globally and its galaxy of nominations and prizes during the awards season, the film simply may not be made of the right stuff to reach the most stellar prize of all. 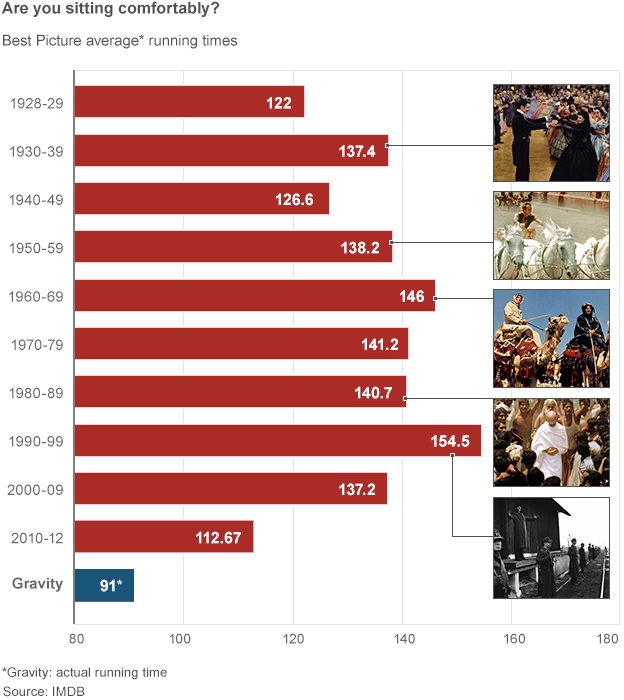 Gone with the Wind

A recent trend toward shorter Best Picture winners, however, suggests this may at least be as favourable a time as any in Oscars history for a small but perfectly formed film such as Gravity.

In the 1990s, a Best Picture average running time beyond two-and-a-half hours made it the most bottom-numbing decade in Oscars history, with winners including historical epics such as Braveheart and The English Patient.

And if you thought those two were long, they were not even among the three longest Best Pictures in a decade when there were also wins for Schindler's List (195 minutes), Titanic (194 minutes) and Dances with Wolves (181 minutes).

Since those bloated Nineties days, however, Best Picture winners have been getting in shape and shedding minutes.

This year's longest Best Picture nominee is the three-hour The Wolf of Wall Street, from Martin Scorsese, the veteran director whose acclaimed body of work is notable also for its steadily climbing running times.

"We're gonna get this show done in three hours - or as Martin Scorsese calls it, 'Act I'," quipped Tina Fey at the Golden Globes.

"We have come to equate long with serious, and so many directors (and studios) go for padding rather than editing," argues Amanda Dobbins, of New York magazine, in a piece headlined "All Hail Gravity, the 91-Minute Oscar Movie".

Even within its restricted running time, with its universal themes of grief, recovery and survival as well as a visual scale that literally takes in the whole world, Gravity manages much that the academy usually finds so persuasive.

Dobbins, arguing that the film is "just as important as something 80 minutes longer", says: "As a time-limit enthusiast, I am still rooting for Gravity, which proves that epic movies do not need to go on for ever and ever."

After the brief but brutal struggle that Gravity puts Sandra Bullock's lead character through, the film now faces its own battle against the odds - having delivered one triumphant ending already, can the movie manage another come Oscars night?