BTec pupils have started receiving their final grades - in some cases almost two weeks after they were due.

The company responsible said the delay was to make sure BTecs were marked in a similar way to GCSEs and A-levels.

What are BTec Nationals and BTec Firsts?

They are assessed over the course of the qualification through exams, practical coursework and often, placements.

BTec Nationals are studied over one or two years and are similar to A-levels. They can be used to get into university, although many use them to have occupation-specific skills.

BTec Firsts are equivalent to one or more GCSEs, and are often taken alongside them. They can be helpful for people trying to get into further education colleges.

What happened with BTec grades?

In mid-August, it was announced that A-level and GCSE students would receive grades estimated by their teachers rather than those calculated by a controversial algorithm (a type of formula).

This change did not automatically include BTec results, which also used an algorithm. However, it was later confirmed they will also use teachers' grades.

Pearson, the company which runs BTecs, said this late change meant it was unable to release the results on time.

How were BTecs being marked?

Originally BTec grades were based on completed assessments and predicted results.

These were then adapted, based on whether the predicted grades were higher than usual for a particular college.

This is similar to how A-level and GCSE students were marked.

However, Pearson has said that because BTec students do far more graded assessments throughout the year, their predicted grades were more similar to previous years.

Despite this, they delayed grades to ensure that no students have been downgraded, because this might unfairly disadvantage them against A-level and GCSE students.

Some courses which rely on practical assessments, like lab work or childcare, have been adapted. For example, video calls have been used so assessments can be done in a socially-distanced way.

Can I challenge my results?

Once you receive your BTec marks, you can appeal to your education provider.

It might also be possible to complete your assessments in the autumn, although you should check based on your course.

Who takes BTec Nationals and why?

A further 200,000 are estimated to sit BTec Firsts and other BTec qualifications.

BTec Nationals can be sat by any age group - in fact, most are taken by those over the age of 22, as they develop practical career skills.

The most popular subjects in 2019 were business, sport and health and social care.

About 20% of university students in England are accepted after studying only BTec Nationals. Another 10% are accepted into higher education with a combination of A-levels and BTecs. 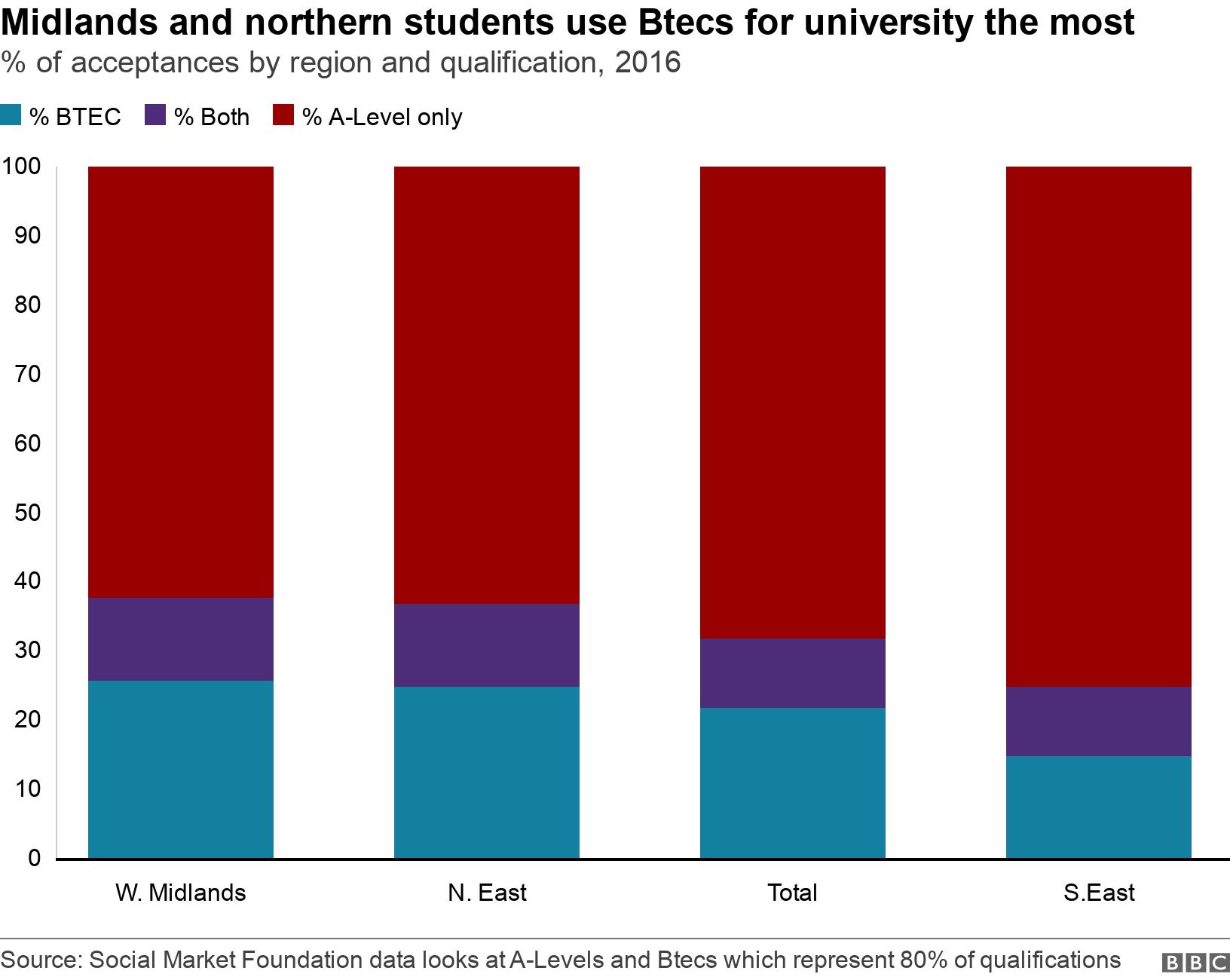 BTec Nationals are particularly popular among white working-class students, according to research by the Social Market Foundation (SMF) think tank.

In 2016, 31% of this group who were accepted into higher education had studied only BTec Nationals.

Students from ethnic minority backgrounds are also more likely to have these qualifications, including 37% of black students. 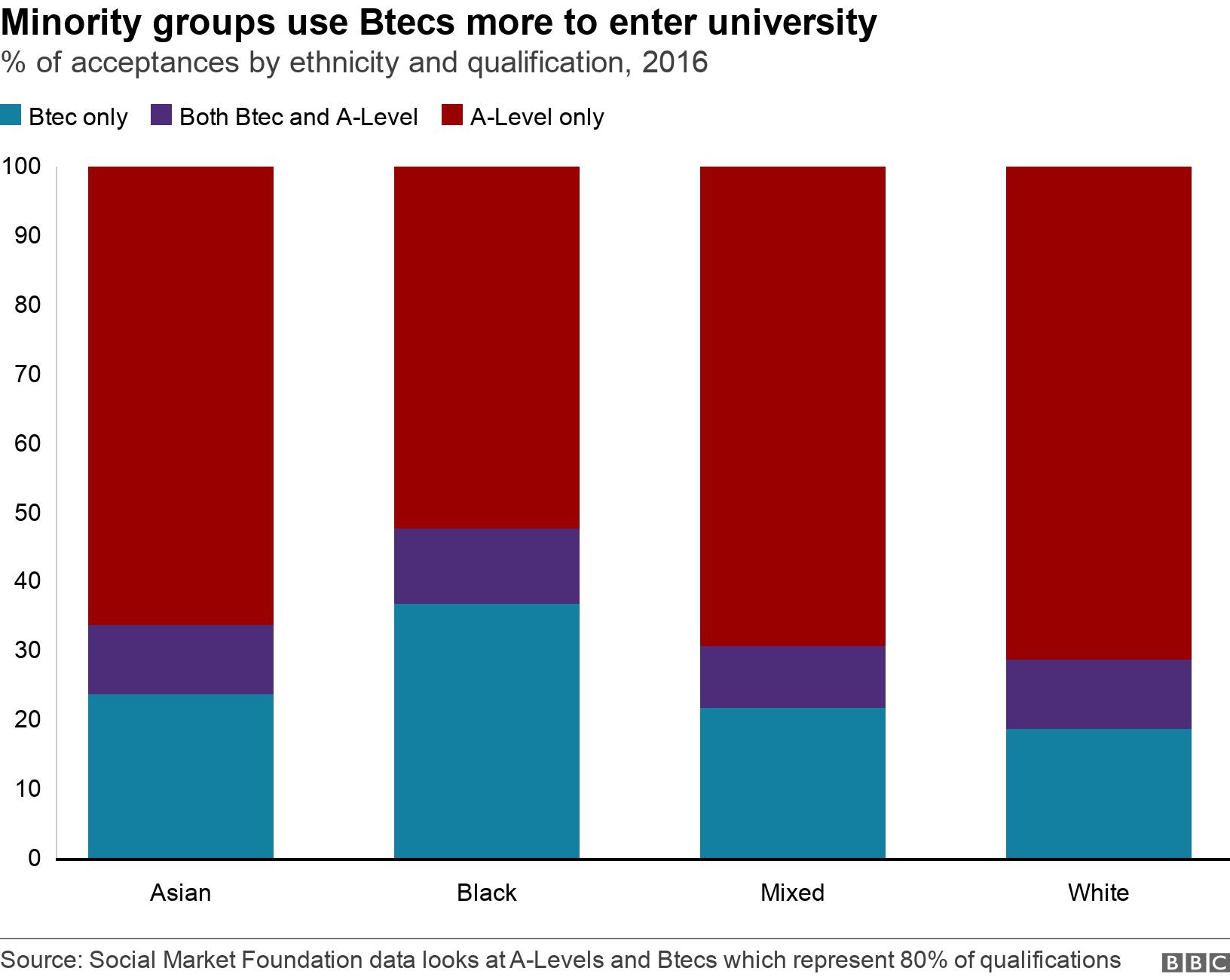 What criticism has there been of vocational qualifications?

According to Ofqual, there are currently more than 12,000 vocational qualifications at all levels, offered by more than 150 awarding organisations.

Beyond BTec, other organisations, such as City and Guilds and the OCR (Oxford, Cambridge and RSA Examinations), also offer vocational qualifications. There are 34 different qualifications available for plumbing alone.

In 2011, Prof Alison Wolf's review of vocational qualifications said many of them "offered little to no labour market value".

And this, in part, led to the Department for Education removing hundreds of courses from those that count towards college performance tables.

This means many qualifications will be effectively defunded.

This autumn, it is hoped a new Technical level qualification will reduce confusion for students and employers and redress a potential imbalance between post-16 technical and academic qualifications.

These new two-year courses will follow on from GCSEs and be equivalent to three A-levels.

Ofqual has also raised concern about inflation in BTec grades.

Between 2005 and 2015, the proportion of students receiving top grades for the "old style" BTecs increased from 21% to 61%. In 2016, a new-style BTec replaced the qualification which had seen the inflation take place.

Grade inflation can mean that employers and universities do not have like for like comparison between different years of students.