Schools in England are being judged on the basis of raw GCSE results for the last time, heralding the end of school league tables in their present form.

Head teachers are welcoming changes that means from next year, schools will be measured on a broader range of results across eight subjects.

The government says schools have risen to its moves to toughen standards.

The number of schools falling below the current floor standard has remained stable at 312.

Secondary schools are "underperforming" if fewer than 40% of pupils get five GCSEs at grade A*-C, including English and maths, and if the school has a below average score for pupils' progress.

The data is based on examinations taken last summer.

Compare schools in your area

Tap here to search for the results for your area. 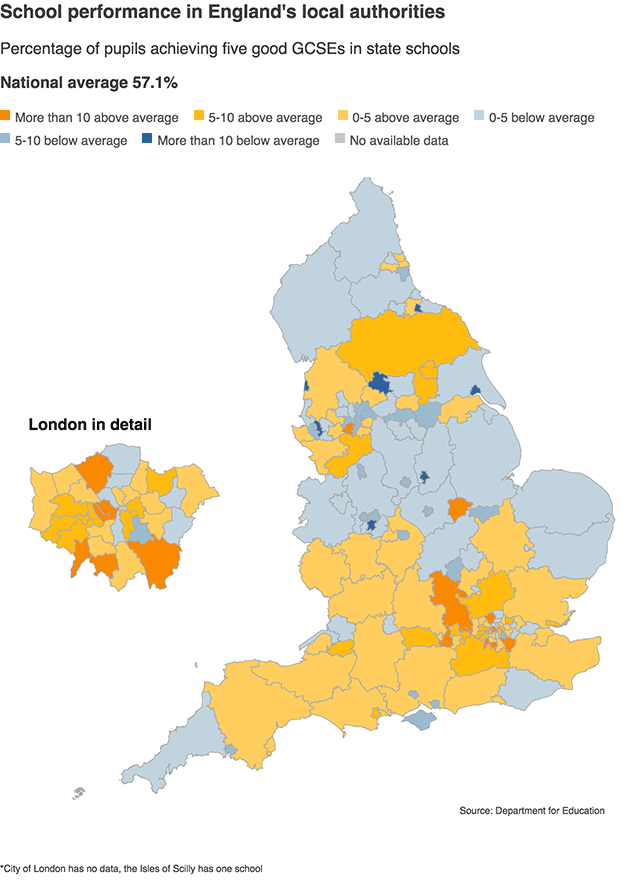 Head teachers have long complained measuring success on the basis of GCSE results alone is unfair as it does not take into account the intake of the school.

But ministers have maintained parents want and need simple and easy-to-digest information about schools.

The difference in achievement by gender is startling, with roughly a fifth fewer boys than girls reaching the end of Key Stage 4 with a good set of GCSEs in state schools.

Some 61.8% of girls got five good GCSEs, including English and maths, compared with 52.5% of their male peers.

And fewer boys than girls made at least the expected level of progress - 65.9% of boys opposed to 76.5% of girls.

More girls (29.3%) than boys achieved the English Baccalaureate (EBacc), which requires GCSEs in two sciences, a language, history or geography, as well as English and maths. Only 19.5% of boys obtained it.

Overall, 24.3% of pupils achieved the EBacc.

There was also a marked difference between the performance of disadvantaged pupils (those eligible for the pupil premium) and their more advantaged peers, with just 36.7% getting five good GCSEs, including maths and English, compared to 64.7%.

The poorest performing local authority was Knowsley on Merseyside, where 37.4% of pupils met the required standard, compared to the national average of 57.1%.

From next year, schools in England will be measured on what is known as Progress 8. Progress 8 will replace the five or more good GCSEs, including maths and English, benchmark as the key measure for all secondary schools.

Progress 8 assesses the progress pupils make between Key Stage 2 tests taken at the end of primary school and their performance in a specified mixture of eight subjects at the end of secondary school. Schools will be given a score based on how their pupils have progressed compared to the national average.

This year, schools were given the option to "opt in" for Progress 8 and 327 schools (around 10%) took this up.

"Our academies programme is revolutionising the school system, with converter academies leading the way and sponsored academies turning round schools which previously would have been left to languish.

"Our reforms to GCSEs and A-levels are based on the highest possible aspirations for our young people - providing a broad and balanced education and equipping them with the knowledge, skills and qualifications which will set them up to succeed."

The Association of School and College Leaders said this year's performance data represented the end of the school league tables "as we know them".

Deputy general secretary Malcolm Trobe said the new progress measure, known as "Progress 8", which is based on pupils' progress in a broader ranger of subjects was a fairer way of judging schools.

"Measuring schools on GCSE attainment does not take into account the fact that children are at different points when they start their secondary education.

"Schools may be doing a fantastic job in helping struggling pupils make great progress, but judging them on GCSE results does not reflect this because it is based on the grades achieved rather than the progress made.

"This particularly penalises schools in challenging areas. It can unfairly stigmatise schools which are actually doing some superb work in difficult circumstances and this can be damaging to the morale of school leaders, staff, pupils, parents and communities."

Rest of the UK

National Association of Head Teachers general secretary Russell Hobby said the number of changes in what statistics were gathered made the data dubious.

"We desperately need stable measures of a stable examination system," he said.

"We need this in order for data to become meaningful again.

"We need this, above all, so that schools and teachers can focus on teaching to the best of their ability rather than coping with constant change.

"The time of change is not over yet, as the government plans to revise the way the EBacc [English Baccalaureate] is used in future performance tables."

The Department for Education publishes an extensive range of data on school performance every year. It uses this data to create and publish league tables by local authority for England's schools.

The school league tables only cover education in England, as Wales and Northern Ireland abolished league tables in 2001, followed by Scotland in 2003.

Scottish exam data is still published online, but it is not in a format where schools can be easily compared.

Wales now publishes tables which place schools in one of five performance bands.

Demonstrations sparked by the death of George Floyd take place in towns and cities across the UK.

US capital braces for biggest demonstrations yet As it happened: Virus warnings as people take to the streets

Back to school: 'You can throw a ball but can't catch one'

Are you allowed to protest during lockdown?

How the NFL made its U-turn on kneeling

The actress talks fame, Weinstein and the future