There has been a fall in the proportion of A-levels awarded top grades for the second year in a row, after years of steady increases.

Previously, the proportion getting top grades had risen year on year.

More than 300,000 teenagers in England, Wales and Northern Ireland are finding out their A-level results, as universities compete to attract them.

The national breakdown of results shows the overall pass rate rose marginally - to 98.1%. It has been rising for about 30 years.

As expected, the results show more students are opting to do A-levels in maths and science and there is a continued fall in those taking French and German, down by 10% and 11% respectively. However, Spanish bucks that trend and has seen an increase in entries of 4%. 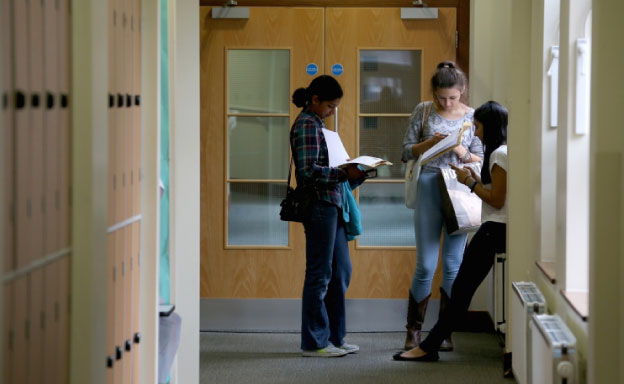 A Levels in numbers

Girls are still more likely than boys to get an A* or an A, but boys this year were slightly more likely to get the highest grade - A*.

When As and A*s are grouped together, girls perform best - with 26.7% of their entries hitting this mark, compared with 25.9% for those of boys.

The results are published by the Joint Council for Qualifications (JCQ), a body that represents the exam boards.

Director of the JCQ Michael Turner said: "The continued rise in subjects such as the sciences, maths and the extended project will be welcomed.

"However, that so few students take a language at A-level is disappointing and although Spanish continues to show growth, the overall trend remains downwards."

Last year, schools challenged the grading of English GCSEs in the courts, arguing that grades had been unfairly held down, but lost their case.

Asked if the exam boards had come under pressure from Ofqual over A-levels this year, a JCQ spokesperson said "absolutely not".

Brian Lightman, the general secretary of the Association of School and College Leaders (ASCL) said the results showed that A-levels were "stable" and that "minor fluctuations" in grades were to be expected.

At the Ucas call centre in Cheltenham, the questions from students seeking guidance and reassurance have been coming thick and fast from early in the morning. Staff were answering queries on Twitter and Facebook from 06:00.

Overall, the picture looks relatively positive. The number being accepted into a UK university so far is up by 9% at 386,000.

Ucas says that is in part because demand from students is higher and universities have made more offers. But it may also be because universities are processing applications faster, having become more experienced in negotiating the new terrain of university competition.

With about 30,000 courses available on clearing at the start of the day, the choice for young people remains giddying and applicants are advised to use the helpline and the Ucas website to get expert advice, as well as speaking directly to university admission officers.

He said the association had not heard any noticeable concerns from schools about the grading this year - in stark contrast to what happened over the GCSE results last year.

Kevin Stannard, of the Girls' Day School Trust, said he was worried by the dip in top grades.

"We are concerned to see that, nationally, there has been a fall in the top grades once again, suggesting that the exam boards have introduced measures to control these," he said.

"Examinations should hold no surprises: their role is to validate candidates' ability and hard work. A pupil's results should not depend on which year they sat the exam in, which subjects they studied, and which exam board's syllabus they followed."

The university admissions body Ucas has said a record number of students have already been accepted by UK universities.

Universities Minister David Willetts told the BBC this was because of government reforms to open up the system and make it easier for universities "to take on the people that they want to recruit".

Under changes, universities in England are being allowed to admit as many top-performing students as they want to.

Many will be hoping not to repeat last year's experience, where thousands of course places were left unfilled.

Last year universities were allowed to take in extra students who had the top grades of at least AAB or the equivalent, but this year that pool of students has been increased to include anyone achieving ABB or more.

Universities are given individual limits for the number of undergraduates they can recruit with results lower than that.

The change was part of a move to increase market forces in England's university system and allow popular universities to expand. It came in alongside higher tuition fees, which rose to a maximum of £9,000 a year from autumn 2012.

About half of the 24 Russell Group universities are among those offering places in clearing - the process that matches students to spare course places - including Durham, Leeds, Nottingham and Birmingham.

The results released today are for A and AS-level exams taken by pupils in England, Wales and Northern Ireland.

Among the nations, teenagers in Northern Ireland continue to do best - with 83.5% of entries scoring between an A* and a C and 30.7% getting an A or A*.

Pupils in Scotland got the results of their Highers and Standard Grades early last week, with the pass rate for both rising slightly.

While many teenagers start work at 18, more than half of UK A-level students opt to go on to university. About 40% of 18-year-olds take at least one A-level.

From 2015 the government plans to change A-levels so that the AS-level will no longer count towards the final A-level grade and all exams will be taken at the end of two years.

It says this will encourage deeper learning and less "teaching to the test".

But he accused the government of neglecting young people not going to university, describing them as the "forgotten 50%".

Education Minister Elizabeth Truss rejected that criticism, saying Stephen Twigg was one of the Labour ministers who had scrapped compulsory languages at GCSE level.

Advice on clearing is available on the Ucas website.

People are urged to be sensible as coronavirus restrictions ease and pubs and restaurants reopen.

'We are just excited to be back open'

The people who think coronavirus is caused by 5G

What links Kanye's video artist and an exile from Nazism?

How Jarvis made an isolation anthem by accident

What do global death patterns reveal about the UK?