The UK's biggest private sector union has also warned of a "summer of discontent" over pay.

What is a trade union?

Trade unions are organisations which help workers negotiate with employers.

They often help employees ask for more pay, or better working conditions. Unions also represent members who have problems at work, or who are facing a disciplinary procedure.

If negotiations with employers don't work, a trade union's members might decide to take action such as a strike.

Who is in trade unions?

Unions exist across many industries, including firefighting, teaching and transport.

Almost one in four UK workers (23%) were union members in 2021 - a total of 6.4 million people, according to government statistics.

After peaking at 13.2 million in 1979, union membership has fallen significantly - although the rate of decline has slowed. 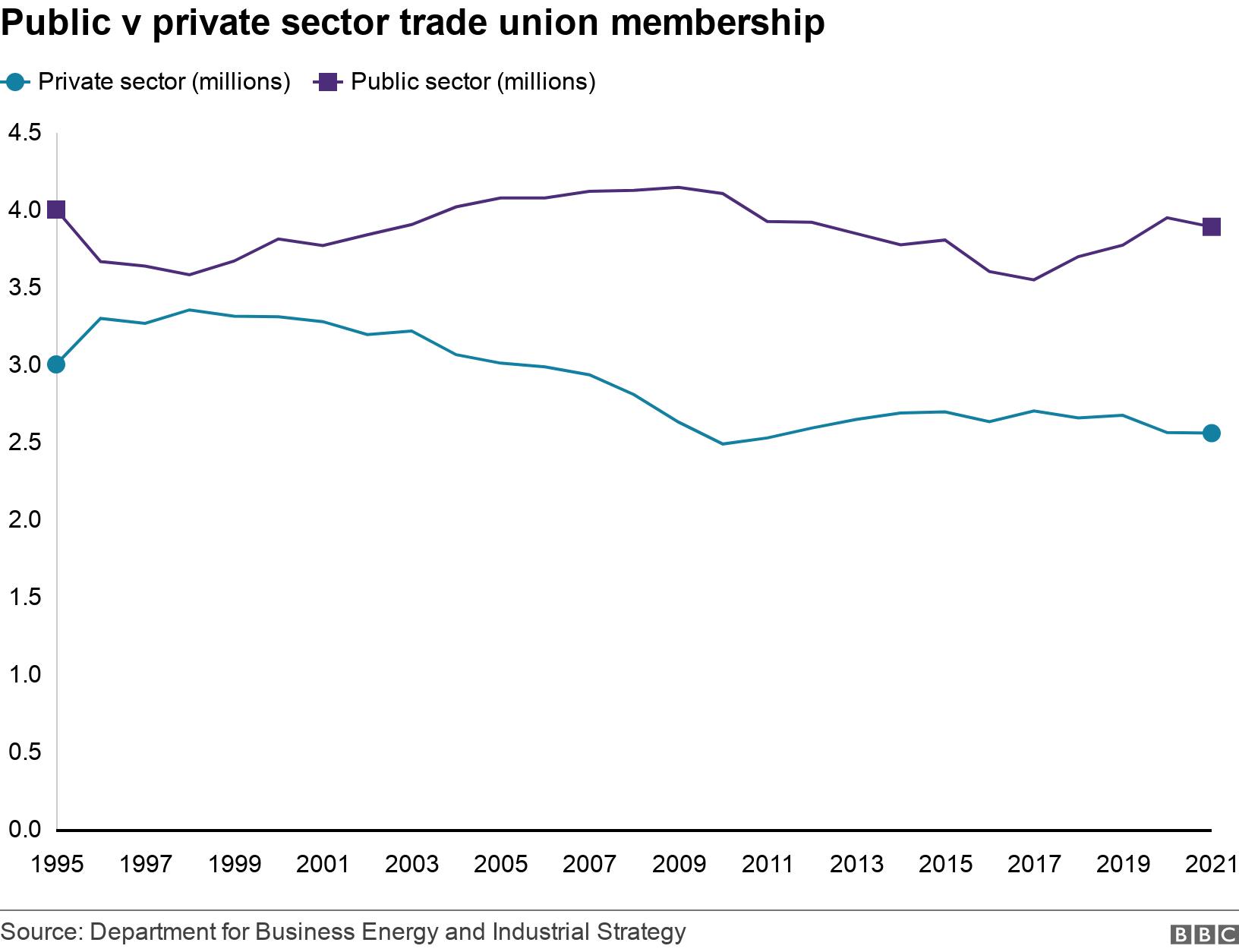 In 2021, 50% of public sector workers - including people like teachers and health workers - were in a union, compared with 13% of private sector employees.

The likelihood of being in a union increases with age - with employees over 50 most likely to be members.

Members normally pay a monthly subscription and can leave at any point.

Who has announced strikes?

The rising cost of living and pay are at the heart of a number of disputes:

What are the rules for calling a strike?

The law says a strike can only happen if a majority of union members agree via an organised vote - known as a ballot.

There are strict rules around holding a vote. For example, it must be a postal ballot - where members vote on paper and return it in a prepaid envelope.

If workers agree to strike, details must be given to the employer at least 14 days before it begins (unless the union and employer agree to seven days).

If the rules aren't followed, a court could prevent a strike taking place. In 2010, for example, BA won a High Court injunction to stop strikes by cabin staff. 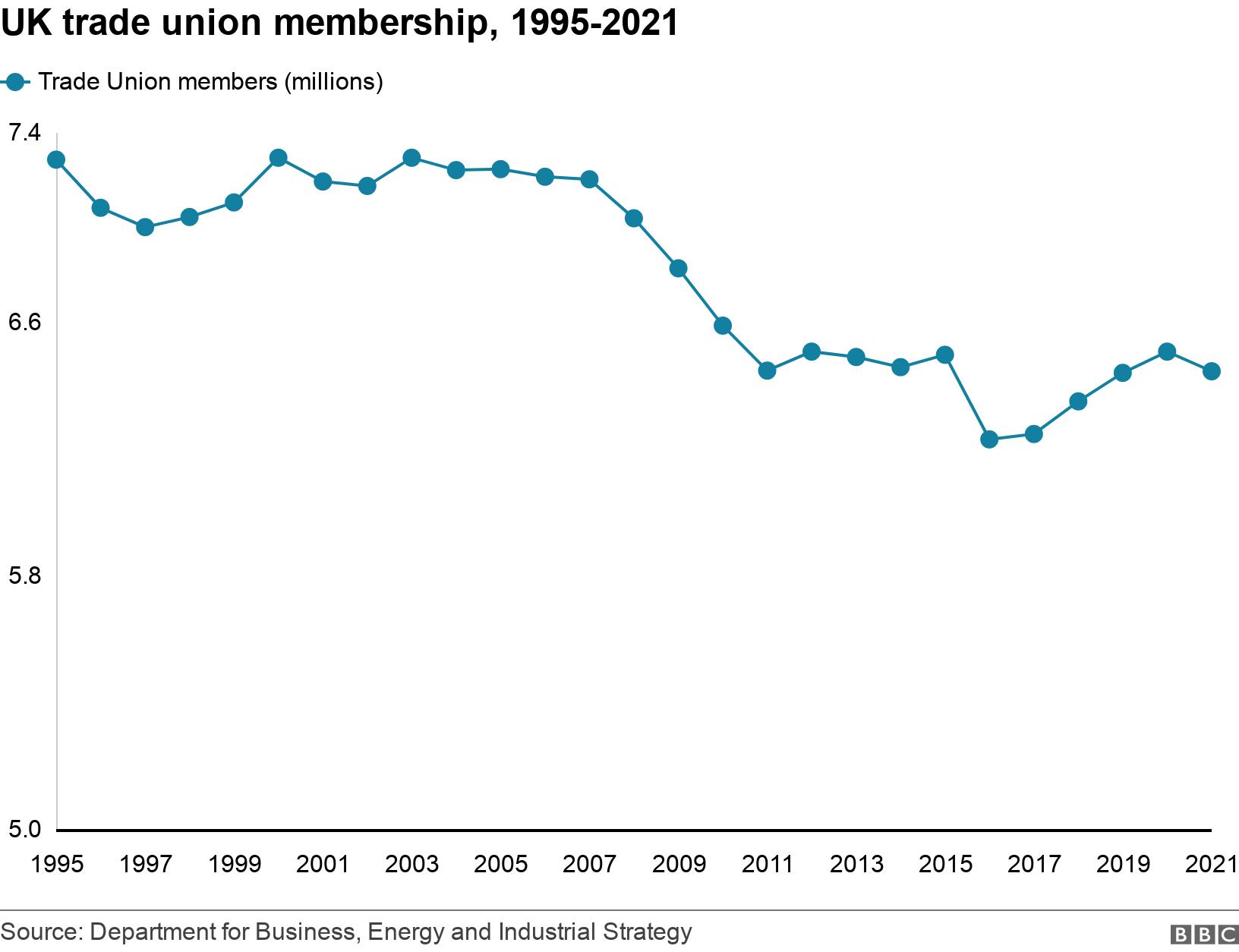 Is anyone allowed to strike?

A few professions are not allowed to strike.

Police officers, for example, are banned from taking strike action.

Nurses have an agreement that they should only walk out if it does not risk the wellbeing of patients.

"As long as the industrial action is lawful, non-union members are allowed to go on strike and remain protected from dismissal," she says.

Are strikers paid and can they choose to work?

Workers on strike can expect to lose wages for the time they do not work.

However, "pay cannot be deducted from a worker if they were striking on a day they were not scheduled to work", says Ms Boyde.

No-one can be forced to take part in a strike - so a worker can still choose to work if they want to.

Can strikers be sacked or replaced?

In the UK, employees are protected from being sacked during the first 12 weeks of any official industrial action.

If a worker is sacked during this period, they can claim unfair dismissal.

However, workers can be dismissed after 12 weeks if the employer has tried to settle the dispute. For example, if an employment adviser like Acas has been brought in to help find a solution.

The government has introduced a new law allowing businesses to use temporary agency workers to fill in for striking workers.

However, the union Unison says it will mount a legal challenge.

How are trade unions linked to the Labour Party?

The Labour Party was created from the trade union movement in 1900 and still retains close links.

There are currently 12 trade unions affiliated to the party, including two of the largest - Unison and Unite.

Labour relies on the unions for funding. During the last general election campaign Labour received a total of £5.4m - of which £5m came from trade union donations.

Members of trade unions linked to Labour can apply to be allowed to vote in party leadership elections.