Should the UK ditch the one penny coin like Canada? 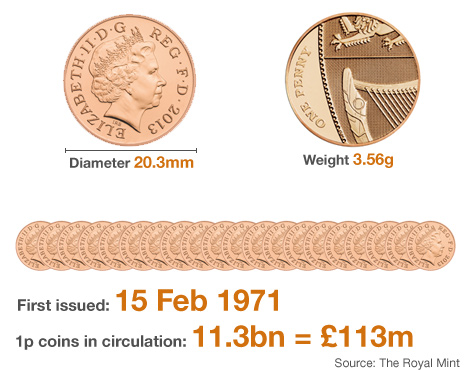 Pennies were made of bronze (97% copper, 2.5% zinc, 0.5% tin) until September 1992, after which they changed to a mild steel core electroplated with copper. This also makes them magnetic.

The 1p coin is legal tender for amounts up to 20p - so you cannot pay your debts with a sack full of pennies.

Go shopping at any shop in Canada and you may notice that something is missing in your change - the one penny or cent.

The coin is being withdrawn from circulation by the Canadian government. From Monday, change must be rounded up or down to the nearest five cents.

The penny's eroded purchasing power is behind its removal, along with rising manufacturing costs, hoarding by households, and the outlay by retailers in handling the coins.

Canada is not the first country to ditch a low denomination coin as inflation reduces its value. Australia, Brazil, and Sweden are among many others to do so.

So, does this trend put the UK's 1p coin at risk? Do these coins just sit in a pot at home? Can anything be bought with a penny anyway?

The 1p coin is by far the most common coin in the UK. There were 11.3 billion in circulation, according to the latest figures from The Royal Mint, accounting for nearly 40% of all coins in the system.

Strolling around the streets of Hastings in East Sussex with a pocket full of pennies, it can be tough to find somewhere to spend them.

The old-fashioned shove penny games in the seaside amusement arcades only accept 2p pieces, with the tempting prize of - more coins.

An accordion player busking in an underpass is happy to accept some loose change, but shoppers are less interested in filling their wallets with them.

"One pence and five pence pieces are a pain in the rear end," says one man taking a tea break.

Surely the traditional sweet shop, with its pear drops and lollipops in the window, will still be selling penny chews?

"They generally cost more now - about 2p or 3p each," says Jerome Franklin-Ryan, specialist at The Sweet Shop and Tobacconist. "That's inflation in action.

"People still come in with pennies to spend, but we tend to sell things by weight now. We do pester them for their pennies so we can give it out in change."

Mr Franklin-Ryan might even be sitting on an alternative currency. In New Zealand, one, two and five cent coins have all been removed from circulation. Many shops offer sweets, instead of small change, as a result.

In his role as "Master of the Mint", the Chancellor - currently George Osborne - makes decisions over the detail of coins. In 2010, he announced that £10m a year would be saved by making coins with steel covered in nickel plating, rather than copper.

Mr Osborne has just hired Canada's central bank governor, Mark Carney, as the next boss of the Bank of England. Yet, even in that role, Mr Carney will not have the power to withdraw the penny - even if he sees Canada's move as a success.

The power over the 1p coin's future lies with the people, according to Alec Chrystal, emeritus professor of money and banking at the Cass Business School.

"It will be driven by demand, rather than supply. If we do not use them, then they will drop out of circulation," he says.

"There are still plenty of places around that need them, not least charities which might well be upset if they were to go."

Some analysts have suggested that the 2p - the third largest sized coin in the currency - might be more at risk of withdrawal.

But Prof Chrystal says that in general the smallest denomination coin is the most likely to disappear as habits change, but not for a while yet.

"Cash is still widely used. In terms of volume, a remarkably high proportion is still used," he says.

The number of cash payments made in the UK in 2011 was more than double the number of transactions made by card, data from the Payments Council shows.

This is primarily the result of the popularity of cash for low-value transactions. In terms of value, more is now spent on debit cards alone than in cash. There are fewer high value transactions, but these tend to be made on plastic.

One retailer where you might expect a keen interest in the future of the penny is 99p Stores.

"It is actually a myth that we give out lots and lots of pennies. In fact, people tend to buy four or five items so we give out more 5p and 2p pieces," says co-founder Hussein Lalani.

He says that the cost of handling coins can be higher for retailers, the lower the denomination. Meanwhile, he says retailers and customers are feeling the squeeze, given the state of the economy.

"I do feel that people are hanging around for their change a bit more since the recession," he adds.

These shoppers might be penny-pinching, or penny-wise and pound-foolish. These are two of the many expressions that the penny has given to the English language.

Other informal phrases include "a pretty penny" to define a considerable sum of money, and "when the penny drops" to explain that somebody has finally understood something.

The withdrawal of the Canadian penny brings a long history to an end. It was introduced with the decimal system in 1858 and was struck at mints in England until 1908.

Since then, some 35 billion pennies have been struck at the Ottawa branch of The Royal Mint - half of them in the last 20 years.

The UK 1p coin was introduced into circulation on 15 February, 1971, when the country adopted decimalisation. It had the word "new" struck on the back of the coin to avoid any confusion with old pennies. This was stopped in 1982.

Such a short history, and large circulation, means that the 1p coin is unlikely to have any collectable value, says coin dealer Peter Nichols, of St Leonards, near Hastings.

"You would have to keep them for a very, very long time," he says. "They are just scrap metal."

He says he has people coming in with £50 bags of old pennies, which are not worth anything for collectors.

His view is that people should keep the 50p coins that commemorate the Olympics, as they might eventually be worth something.

One thing is certain for the humble 1p piece. The effect of inflation means it is always losing the race to maintain its value.

When the penny drops

UK employment falls by biggest amount in a decade Debenhams to cut 2,500 more jobs amid pandemic