Energy costs account for an increasing amount of people's income, driving some into fuel poverty, but what is it that drives the changes in bills?

Clearly the cost of wholesale gas and electricity is the single largest component of any household energy bill, but that still makes up less than half the overall cost of domestic fuel.

Other factors, such as the transmission cost and increasingly the cost of energy efficiency and clean energy subsidies help push up the cost of the bill.

One controversial area is the profit margin for the company itself. Consumer groups have accused energy companies of taking excessive profits.

November's estimate from Ofgem, disputed by energy firms, suggests the profit margin on energy bills in Britain almost doubled from 2010.

In that year energy companies made a smaller margin on their sales than most supermarkets.

What pushes up annual bills? 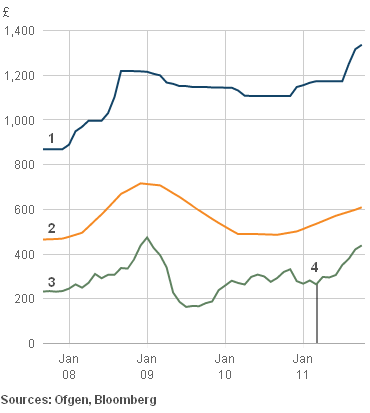 The main thing that currently drives UK bills, however, isn't energy company profits or environmental incentives but the changing price of gas.

Increases in the wholesale price of natural gas will not only drive up the cost of a household's heating, it will also increase the cost of its electricity.

That is because the price of electricity generated from gas power-stations tends to set the wholesale cost of power paid to all generators.

However the link between wholesale gas prices and bills is not exact.

Energy companies and power generators buy most of their gas in advance and employ traders to try to get the best deal by buying lots when the price is cheap.

These 'hedging strategies' are rarely disclosed by firms making it difficult to know how much they have actually paid for the energy they supply.

The rising cost of wholesale energy is therefore the main, but not the only, factor behind the sharp rise in fuel bills, which have far outstripped rises in household incomes.

Figures for England and Wales show the average customer bill has increased by 73% since 2005, but household incomes have only increased by 20%.

Rising bills have forced an increasing number of homes into fuel poverty, which is currently defined as spending more than 10% of household income on fuel.

A recent report for the government by Prof John Hills from the LSE found 2,700 people died each year in England and Wales from problems linked to fuel poverty.

The number of homes technically in fuel poverty in England has gone up almost five-fold in the past eight years from a total of approximately 1.2 million in 2003 to 5.5 million in 2011.

But the definition of fuel poverty itself is now subject to review.

The interim report by Prof Hills, the government's independent adviser, has suggested it should be narrowed to focus on low-income households with higher than average energy costs which are driven into poverty by the cost of adequately heating their home.

That new definition gives a more even number of people in fuel poverty; higher in 2003 but lower in 2009, the most recent year for which it has so far been calculated.

However, Prof Hills suggested a second measure, highlighting the shortfall that fuel-poor households face if they are to heat their homes and stay out of poverty.

Travellers to England, Wales and Northern Ireland from many countries no longer have to self-isolate.

'We've scaled back our wedding to 200 people'

See a swarm of locusts in your room - in 3D

How New Zealand went 'hard and early' to beat Covid-19

Why Hollywood needs computer games more than ever

From addict, to armed robber, to movie star

Who will "sashay away" first?

Full article Who will "sashay away" first?