Apple co-founder Steve Jobs has resigned as chief executive of the technology giant and will be replaced by chief operating officer Tim Cook.

Mr Jobs, who underwent a liver transplant following pancreatic cancer, said he could no longer meet his chief executive's duties and expectations.

The Silicon Valley legend will become chairman of the firm.

The 56-year-old has been on medical leave for an undisclosed condition since 17 January.

In a short letter to the board of Apple, Mr Jobs wrote: "I have always said if there ever came a day when I could no longer meet my duties and expectations as Apple's chief executive, I would be the first to let you know.

"Unfortunately, that day has come. I hereby resign as chief executive of Apple.

"I believe Apple's brightest and most innovative days are ahead of it. And I look forward to watching and contributing to its success in a new role.

"I have made some of the best friends of my life at Apple, and I thank you all for the many years of being able to work alongside you."

Apple board member Art Levinson paid tribute to Mr Jobs' contribution to the company: "Steve's extraordinary vision and leadership saved Apple and guided it to its position as the world's most innovative and valuable technology company."

Apple shares have fallen 4.1% in the secondary listing in Frankfurt, having dropped more than 5% in after-market trading on New York's Nasdaq.

Analysts said the resignation was not unexpected, and would have little impact on the day-to-day running of the company.

"Steve is [still] going to be able to provide the input he would do as a chief executive," said Colin Gillis at BGC Financial.

"But Tim has been de facto chief executive for some time and the company has been hugely successful. The vision and the roadmap is intact."

Nor will customers see any real difference, analysts said.

"At the end of the day, consumers don't buy products from Apple because they're from Steve Jobs, they buy them because they meet their needs and they're good products, and they'll continue to do that," Michael Gartenberg from Gartner told the BBC.

The company has some big products on the horizon such as the iPhone 5 and the iPad 3.

The firms compete with Apple in the smartphone and tablet-PC sector, and have been involved in legal battles with Apple over patent rights.

The boss of another rival in the phone market paid tribute to Mr Jobs' work.

"Steve Jobs is a visionary in the computing industry," said Stephen Elop, chief executive of Nokia.

"We look forward to both Steve and his team having a positive impact on our industry for many years to come." 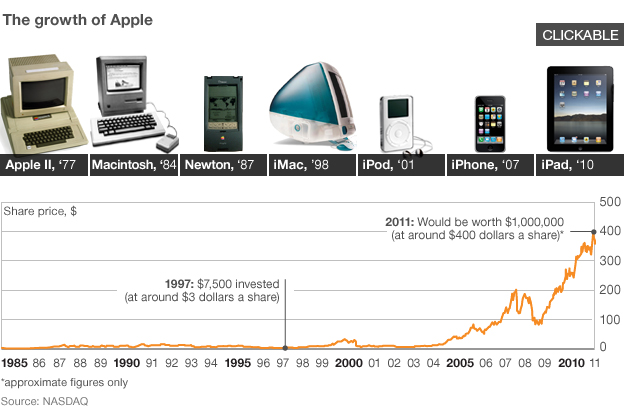 Although this was not Apple's first home computer, the Apple II was the company's breakthrough product. Its MOS 6502 processor ran at 1MHZ and was supported by a maximum 48K RAM. Original retail price: $1298 (£780).

At a time when PCs were using text-based command line interfaces, Apple pioneered the use of moveable windows. The Macintosh's single integrated processor and monitor design is still used in the iMac line of computers.

Produced during Steve Jobs' period of absence from the company. The Newton organiser is now recognised as having paved the way for the iPhone. Slightly ahead of its time, the Newton was not hugely popular.

Steve Jobs marked his return to Apple with the iMac line of computers. Remembered more for their radical looks than technical specs, the iMac's multi-coloured shells were created by British designer Jonathan Ive.

MP3 players had been around for a couple of years. Apple simply refined their design with a compact, elegant and now iconic while package. The first model only had a 5GB hard drive - enough for 1,000 songs, according to Apple.

Apple's entry into the mobile market had been long anticipated. Again, the company took existing technologies - such as the touch screen - refined them and added a touch of design flair. It sent shockwaves through the industry, still being felt today.

Steve Jobs revealed that development on the iPad started before work on the iPhone. It sparked a deluge of tablet products from almost every computer and mobile maker. But the iPad remains the top seller with around 60% market share.

Mr Jobs is widely seen as the creative force that has driven Apple to become one of the world's biggest companies.

Thanks to innovative and hugely popular products such as the iPod, the iPhone and more recently the iPad, Apple has become one of the most sought after brands in the world.

In the three months to the end of June, the company made a profit of $7.3bn on revenues of $28.6bn. It sold more than 20 million iPhones in the period and 9.25 million iPads.

The company recently became the most valuable US firm after its market capitalisation overtook that of oil company Exxon Mobil.

Mr Jobs co-founded Apple in the 1970s with Steve Wozniak, and its Macintosh computers became hugely popular in the 1980s.

In 1985, Mr Jobs left the company after falling out with colleagues, only to return in 1997 and begin Apple's transformation by launching the colourful iMac computer.

The iPod, which revolutionised the personal music-player market and spawned myriad copycat devices, was launched in 2002 and laid the foundations for the company's success over the past decade.

Next came the iPhone, which similarly revolutionised the smartphone market, while the iPad confounded some initial scepticism to prove hugely popular.

Many versions of these products have been launched while Mr Jobs has been on medical leave, and new versions that have been planned for months will not be affected by his departure, analysts said.