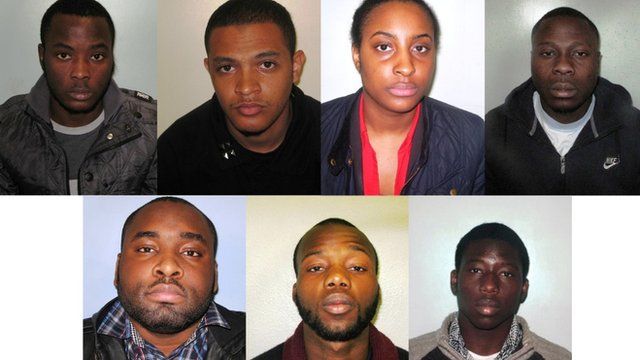 A gang of fraudsters who posted fake job adverts online has been jailed.

The adverts for work in firms like Harrods and Argos were posted on sites like Gumtree and Blue Arrow.

The gang sent out a computer virus to applicants that copied their bank details.

The scam only came to light when applicants complained directly to Harrods.

Adjibola Akinlabi, 26, Damilare Oduwole, also 26, and Michael Awosile, 27, who are all living in south London, were each jailed for seven years.

Malware writer Tyrone Ellis, 27, was jailed for four and a half years, while Temitope Araoye, 29, was given a two-year prison sentence.

Nadine Windley, 26, who pleaded guilty to using her position as an employee of Santander bank to provide the gang with customer account data, was handed a two-year suspended sentence.

Babatunde Akinlabi, 28, who previously pleaded guilty to a 2008 offence of fraud with his brother Adjibola after they used illegally obtained bank details to obtain cash from online bank accounts, will be sentenced on 6 December.

BBC London's Tarah Welsh spoke to Frank Tutty from the National Crime Agency and a victim.