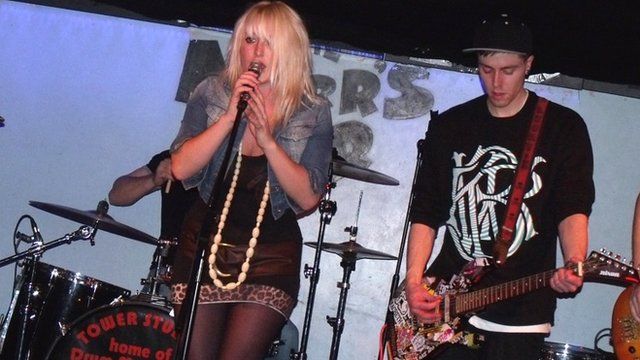 For many years now, the traditional apres-Christmas festivity has been the two-day Boozestock mini-festival at the Marr's Bar in Worcester. For some reason, the first day this year was scheduled for Boxing Day, and that really didn't work out. Also, the promotion seemed to be a case of 'too many cooks'. So I had breezy hopes for the day after - with a fantastic selection of prime local acts on the billing.

The event kicked off early evening at about 5pm, so naturally this news-hound missed out on sets from the Retinal Circus and Lewis Spelt Backwards (apparently in awesome form). I was just in time, though, to catch one of my acts of the year playing another cracking set. Now you wouldn't think of it by her complete confidence on stage, but this is actually New Chapter frontgirl Nicola's first-ever band. She's got the throatiest voice I've ever heard come out of the two counties - a mix of Janis Joplin and Bonnie Tyler - and also a band behind her who all chip in with great numbers like Do It On My Own, Insomniac and the wonderful Haze to maximize their prime asset.

There was barbed humour as well as some great numbers from those bunch of naughty scamps otherwise known as Evilwitch. The And What Will Be Left Of Them spin-off never fail to deliver the goods with machine-gun classics like Stare At The Sun and Oh My God, but my favourite has to be their opening number Not A Plane In The Sky - written in a lunchtime (or two) when the cloud from the Icelandic volcano brought the world to its knees.

This was going to be a hard evening's work for Evilwitch drummer Chris Wemyss, as he stayed in situ alongside Cowley Cowboy Harvey Wyatt on keyboards and bassman-of-steel Joe Shellam, to provide the backing for young 17-year-old guitar prodigy Pete Mann as he dazzled the audience with a selection of mostly Hendrix-type covers. He's currently working on some original stuff.

No rest for the wicked - or for Chris Wemyss either - as he swapped drums for guitar and vocals in his White Stripes-ish project Das Sexy Clap with the belting talent of Kate Birch taking over the stickwork. Just about everyone who sees this raw rocking outfit agrees that they're one of the finds of the year - and with numbers like Push It In Break It Off, 12 Year Itch and Put It Out Yeah - they've got some really tasty ditties thrown into their mix - watch out in 2012!

One aspect of promotion is effective stage management and timing - and I'm not sure that the organisers had quite nailed it on the night. Sure, the Gareth Griffiths-fronted Redbook are a quality outfit of more-than-capable rockers - but although this was a bank holiday, many folks were returning to work the next day and by now the show was running well late - with most people really there for the headliners. I guess Redbook will play to a more receptive audience next time.

Of course the main event was the final gig from the fabulous Dandelion Killers, who've been a fixture on this show from day one. The set, as you'd expect, was total quality with classics like John Wayne, Suburbia Falls and Orphans Of The Empire - all of which deserved a far wider audience.

So why call it a day now? Well, frontman Adam is already involved in projects such as Stuntdog, God Save The King as well as his solo work. Bassist Sinj has work and family committments and now mostly gigs around Ross-on-Wye with his own jazz/blues outfit. Drummer Paul, on the other hand, spends half the year abroad. I can't help feel that with far more effective management and promotion, Dandelion Killers could and should have been the next entry in our Music Map feature of locals acts to have made it big-time. A couple of years ago it looked like the big break was coming when they came to the notice of a fast-growing website - but for whatever reason, that came to nothing - and I reckon that like And What Will Be Left Of Them - they decided that enough was enough - a real shame.