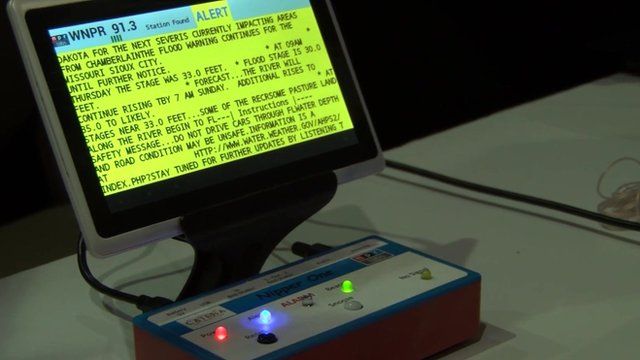 If you're hearing impaired, then US alert systems - which use radio signals to broadcast warnings of impending emergencies - are useless.

To address that, America's National Public Radio (NPR) has developed a prototype system which shows text alerts on a standalone battery-powered device.

The BBC's North America technology correspondent Richard Taylor found out how it works at the Consumer Electronics Show in Las Vegas.

Richard Taylor: Many of the gadgets at CES border on the frivolous, but there are some which are far more serious in concept. In front of me is one of them, Rich from NPR is going to tell me what we're looking at here, what is this system?

Rich from NPR: This is radio for the deaf and the sub-head to that is it is radio alerting for the deaf, or emergency alerts that will affect property or life.

RT: So what is the system that you guys have developed?

RT: In terms of sending emergency messages, the federal government can send them very straight forwardly through text messages, most people have got smartphones these days, they don't need something this elaborate do they?

NPR: Well they would except sometimes the telephone and emergency systems go down for whatever reason and the people that need them the most: the deaf, hard of hearing and other communities, don't get these messages.

By using a broadcast station you cover, typically, an 80 mile diameter and reach millions of people depending where the location is.

RT: What kind of emergencies can you foresee this being used for?

NPR: Right now I see a lot of weather traffic. The national weather services of the US puts out four or five paragraphs of weather emergencies covering floods, snowfall, rockfall, avalanches, natural disasters.

Extreme cold has also been big in North Dakota where we have had sub-zero farenheit temperatures, that really freeze people.

RT: How much would you envisage a system like this costing?

NPR: We imagine that the whole system initially would be about $100 but as more systems are produced the price could go down.

RT: Well lets see how it goes, many thanks indeed