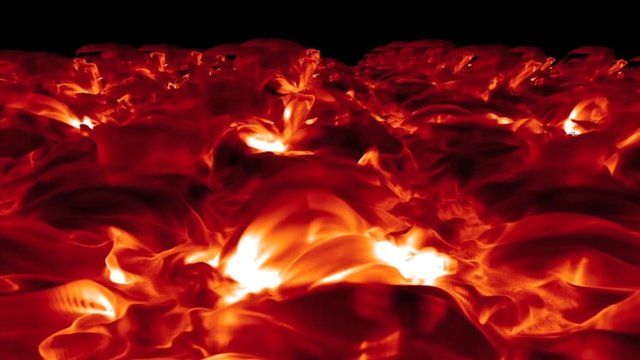 Nasa's Iris mission has observed the region between the Sun's surface and its outer layers, where temperatures reach 2,000,000C.

The satellite has detected explosions of plasma travelling at hundreds of kilometres an hour.

The findings were presented at the American Geophysics Union's Fall Meeting in San Francisco.

The team hope data from Iris, which launched earlier this year, will help them to get a better understanding of, and predict, "space weather".

Storms and flares on the Sun's surface have the potential to disrupt power supplies, transport and communications systems back on Earth.

"The only way you can find this out is by understanding the detailed physics of the Sun's atmosphere."

The images reveal the Sun's surface bubbling like a colossal, fiery cauldron.

Fountains of plasma - jets of charged gas that are thousands of kilometres long - heat up from 10,000C to millions of degrees in a matter of seconds as they burst into the outermost layers of the Sun's atmosphere - its corona.

Speaking to BBC News, Dr McIntosh said, "One of these jets would get from LA to New York in a few seconds. And then, poof, they are gone. It's mind boggling."

Go to next video: Sun's magnetic field set to 'flip'