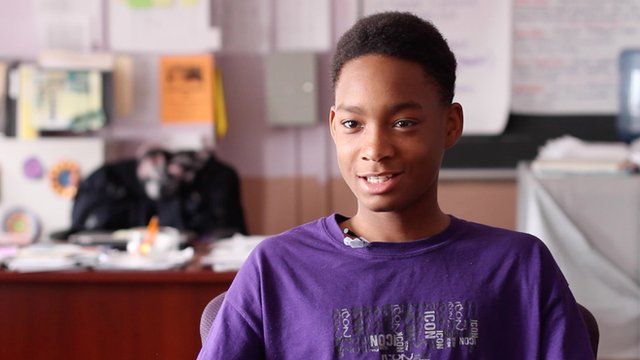 A photo taken of New York City student and posted onto Facebook has turned into a viral fundraising hit.

Brandon Stanton, who takes street portraits and posts them on online as Humans of New York (HONY), has over 11 million Facebook fans. Every day, he chronicles the lives of people living in the city. But last week a photo of a boy named Vidal especially caught his audience's attention.

Vidal was quoted on Stanton's site saying that his principal, Nadia Lopez, made the biggest difference in his life.

"When we get in trouble, she doesn't suspend us. She calls us to her office and explains to us how society was built down around us. And she tells us that each time somebody fails out of school, a new jail cell gets built. And one time she made every student stand up, one at a time, and she told each one of us that we matter," he said in the post, which received over a million likes.

In the post's comments, readers from across the globe wanted to support Ms Lopez, Vidal and the school, Mott Hall Bridges Academy. After consulting with Ms Lopez, Stanton started an Indiegogo fundraiser to help the students - many of whom never leave their Brownsville, New York neighbourhood - visit Harvard. Over 25,000 people have chipped in, while thousands more have followed the story online.

One commenter on Facebook noted that, with due apologies to Kim Kardashian, "THIS broke the internet. Faith in humanity restored!"

The fund has raised over $800,000 (525,712), enough to fund the Harvard trip and a summer school programme for at least a decade. Stanton is now directing all donations towards a scholarship in honour of Vidal, the student that started it all.

The BBC's Anna Bressanin visited the school to see what makes it so special.

Go to next video: Lip-synching goes viral: the rise of Dubsmash