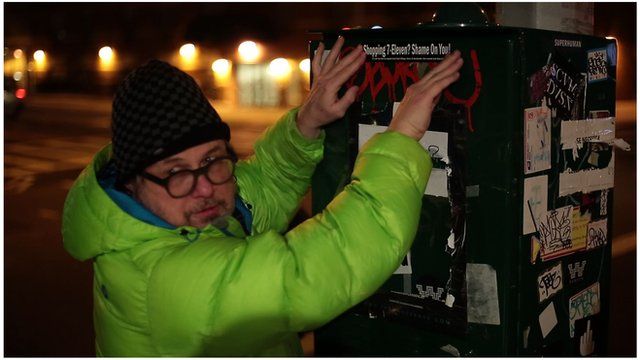 It is not exactly a social revolution. But residents in New York City's East Village have launched a protest against corporate America - or specifically, one corporation.

The 7-Eleven convenience store has announced plans to open 100 new locations in Manhattan, including a shop in the city's Lower East Side.

But residents of the gritty neighbourhood - which once was home to the poet Allen Ginsberg, the artist Ai Wei Wei, and the musician Patti Smith - are protesting against the store's arrival.

The neighbours who live in Alphabet City - the streets between Avenues A and D - take pride in the fact that their community remains made up primarily of small businesses.

They worry that the chain will ruin the image of the neighbourhood, put bodegas out of business and generally contribute to a process of "suburbanisation".

Among the protest activities: night chalking, Twitter and Facebook accounts and a bodega walk, a tourist tour where bodega owners tell their stories of the neighbourhood.

A similar group of rebellious neighbours won similar battles in the East Village in the past - for instance, they saved the community gardens from real-estate investors.

Their goal now is zoning and rules that would be submitted to the community to approve the opening of new chains and stores.

A spokesperson for 7-Eleven said via email that the East Village was a great fit for their brand.

"There is a high concentration of young adults and young families on a budget," said the company statement. "They all have harried, on-the-go lifestyles, and we can help make their lives a bit easier and more convenient."

The BBC spent a day and a night in the community to find out more.

Go to next video: Inside Mississippi's last abortion clinic