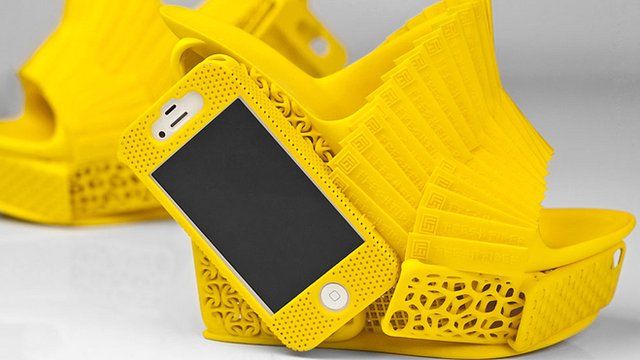 'Why I 3D printed an iPhone shoe'

After around a decade of practice 3D-printing designers have become comfortable with the technique and are now playing with its possibilities like never before - especially as new materials become 3D-printable.

Many of these expert designers are drawn to an area around northern Belgium and the western parts of the Netherlands - including the so-called "ELAt", the Eindhoven-Leuven-Aachen triangle that markets itself as Europe's hi-tech hub.

3D printing companies like Freedom of Creation, Materialise and Shapeways are all based, or originated, in this area. They either create designs, or host communities of people who upload their creations - and they own vast numbers of the printers that will realise the finished items.

Representatives of these companies all congregated in London recently for the launch of a new magazine dedicated to the world of 3D printing, Print Shift. Created by design blog Dezeen, it mimics the concept of 3D printing, in that each individual copy of the magazine is only printed when a customer requests it, an experimental 'on demand' model being tested by UK publisher Blurb.

BBC News spoke to designer Alan Nguyen of Freedom of Creation in Amsterdam, and Bart Veldhuizen an online community manager at Shapeways in Eindhoven, about whether the future for 3D printing lies in printers at home, or hubs of factories 3D printing to order.

Mr Nguyen showed off one of his favourite creations, a shoe which holds an iPhone. He designed it to test copyright principles, he told the BBC.

"We are like DJs," he said, "because they take other people's things and make something completely new." The iPhone shoe is a "mash up", he explained, as it contains other designers' case designs along the base of the heel.

Go to next video: World's first 3D-printed gun fired in US