The Prime Minister has made several claims about what has been happening to poverty.

Boris Johnson has said it has been falling under the Conservatives - he's also spoken about child poverty.

So, does the evidence support his claims?

What counts as poverty?

Before we assess the claims, it's important to understand what we mean by poverty.

In the UK, it normally refers to people who live below a certain income relative to everyone else's.

And child poverty refers to a person (under the age of 18) who lives in a poor household.

How is poverty measured?

There are two main ways:

Relative poverty: This is calculated by taking the median or middle income in the country - that is the level at which half the people earn less and half more.

This "poverty line" moves when the median income changes. During the recession, for example, when lots of people's wages went down, relative poverty rates improved but it is unlikely that those at the bottom felt wealthier.

Absolute poverty: This uses the same 60% calculation as above, but it applies it to the median income of a fixed year - 2010-11.

This measure, which is adjusted for inflation (or rising prices), gives a longer term view of what is happening to people on low incomes and avoids the issues that arise during an economic downturn.

But it also doesn't reflect how, if standards are increasing year-on-year for better off people in society, the poorest are being left behind. This is because it is comparing salaries to the median income from a decade ago.

Claim 1. Boris Johnson: "Absolute poverty and relative poverty have both declined under this government."

The number of people in relative poverty in the UK has actually increased from 13.6m in 2009-10 (just before the Conservatives came into power in coalition with the Liberal Democrats) to 14.5m in 2018-19.

Note that Boris Johnson referred to a decline "under this government".

He became leader in July 2019 but since the poverty figures for last year have not been published there is no way of judging what has happened to them under "this government". 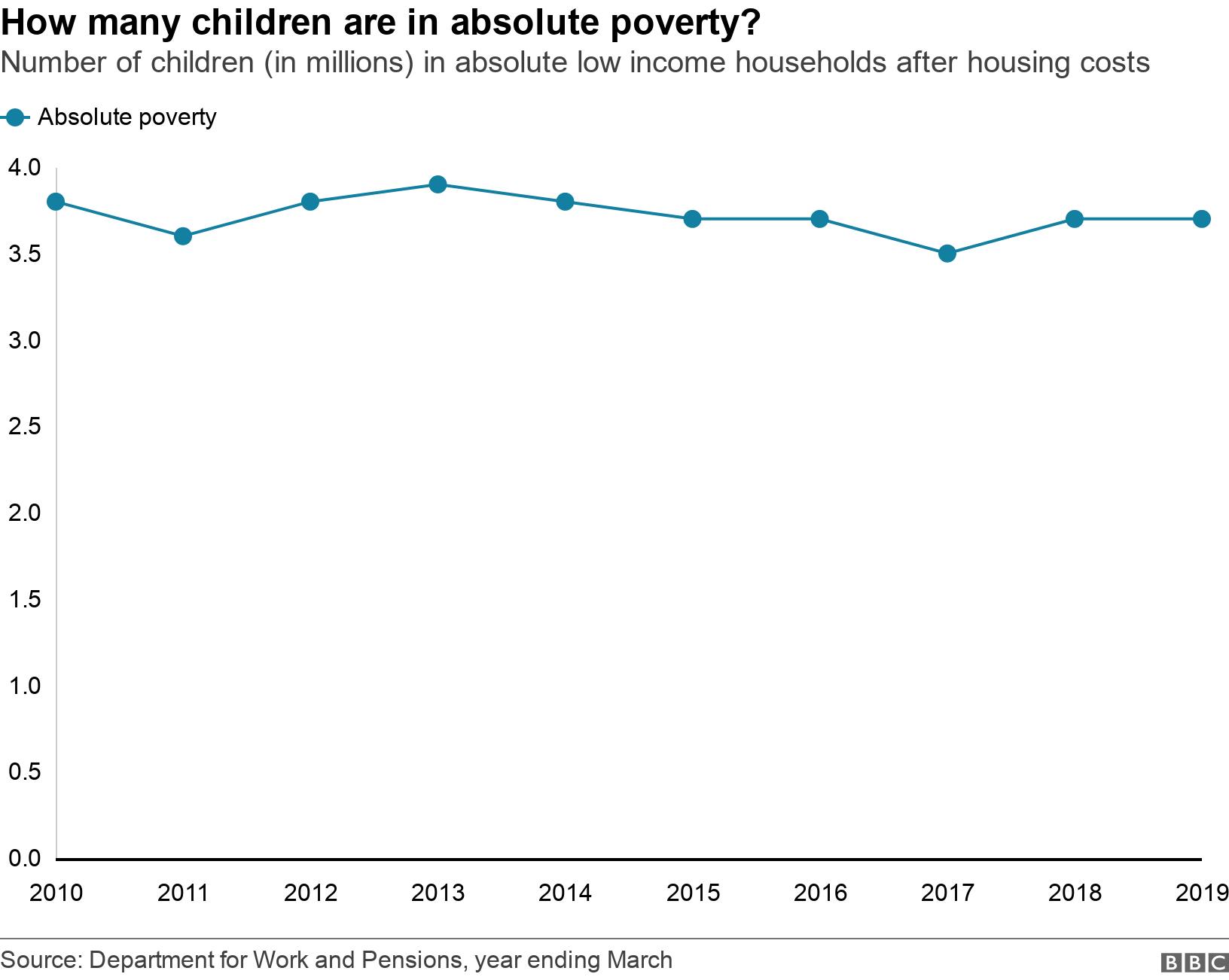 This means 100,000 fewer children are in absolute poverty than before.

Today, the proportion is still 30%, which represents about 4.1 million.

However, because the population has increased since 2010, it means 300,000 more children are living in relative poverty now.

Claim 3. Boris Johnson: "There are...500,000 fewer children falling below low-income and material deprivation."

The number of children in deprivation has decreased, but by less than he claims.

Low income and material deprivation is yet another way to measure poverty. This metric is different from the others because it is based on a survey.

It asks what items or services parents can't afford either for themselves or for their children. This includes the ability to go on a school trip once a term, to eat fresh fruit and vegetables every day or to keep the house warm.

Anyone who scores above a certain point from the 21 questions is deemed to be in material deprivation.

In 2010-11, new questions were introduced to the survey, meaning we are not able to compare before then. 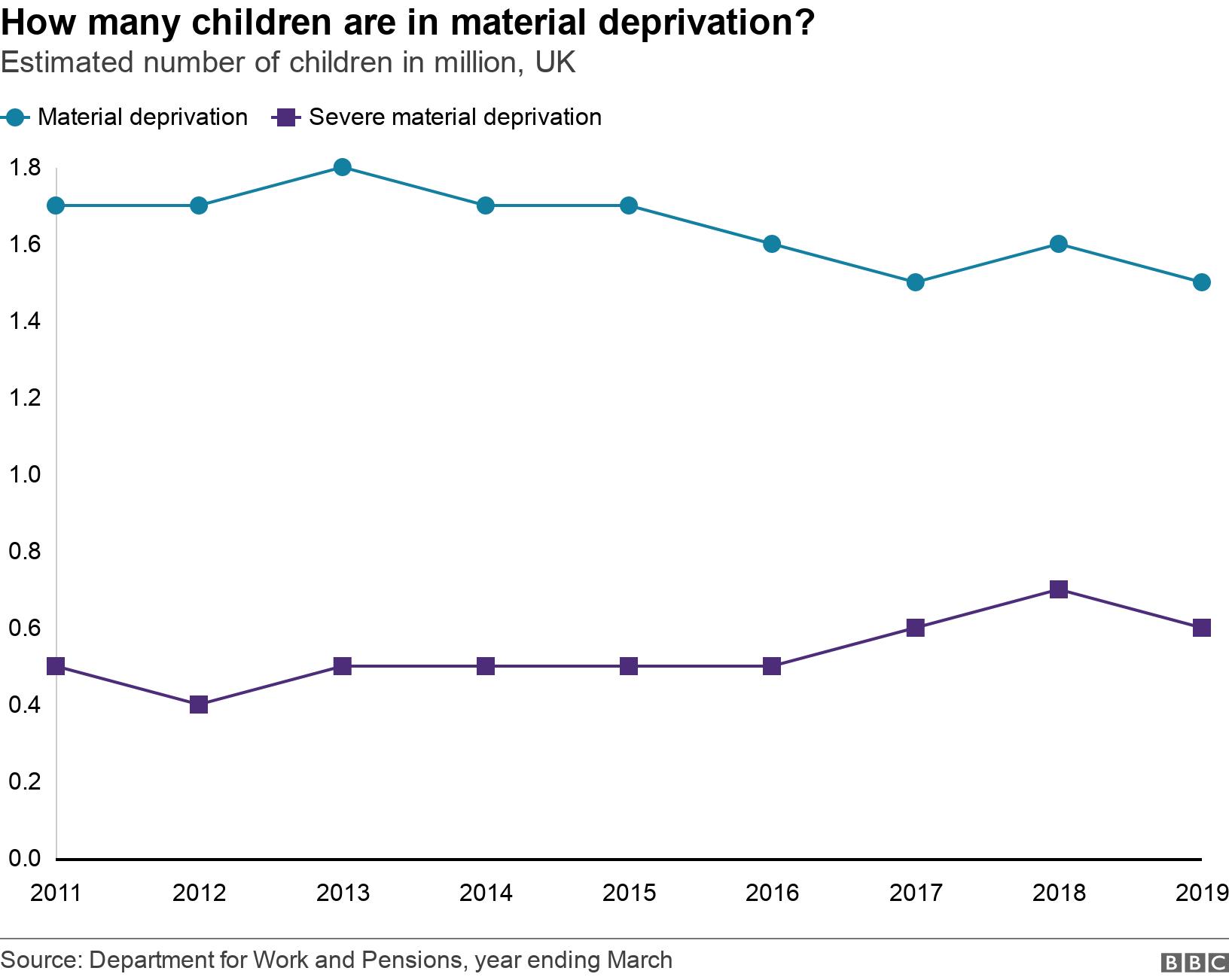 This is less than half of what the prime minister said.

Downing Street says the Prime Minister's figure came from comparing numbers under the old set of questions and those under the new ones.

This has been a recurring claim by the prime minister, especially during last year's election.

We have not found any evidence that it is true or where the number has actually come from.

The Office of the Children's Commissioner for England did some analysis on different combinations of households which could be defined as families.

Their analysis did not show a 400,000 drop. It showed that, similar to above, relative poverty had increased while absolute poverty had declined.

We asked Downing Street for the source of this figure but they did not supply one.