The Conservative manifesto pledges to add 50,000 nurses to the workforce in England by 2024-25.

How realistic is this target, particularly given that nurse numbers have gone up by only about 5,000 since 2010?

Workforce is one of the main concerns for the NHS in England right now. Health employers talk of difficulties filling rotas and worries about how future staff can be recruited at a time of rising patient demand.

In an attempt to address that, the Conservatives have said that if re-elected they would take action to address the problem.

This will be achieved, according to the party, by training more staff, international recruitment and better retention of existing nurses. 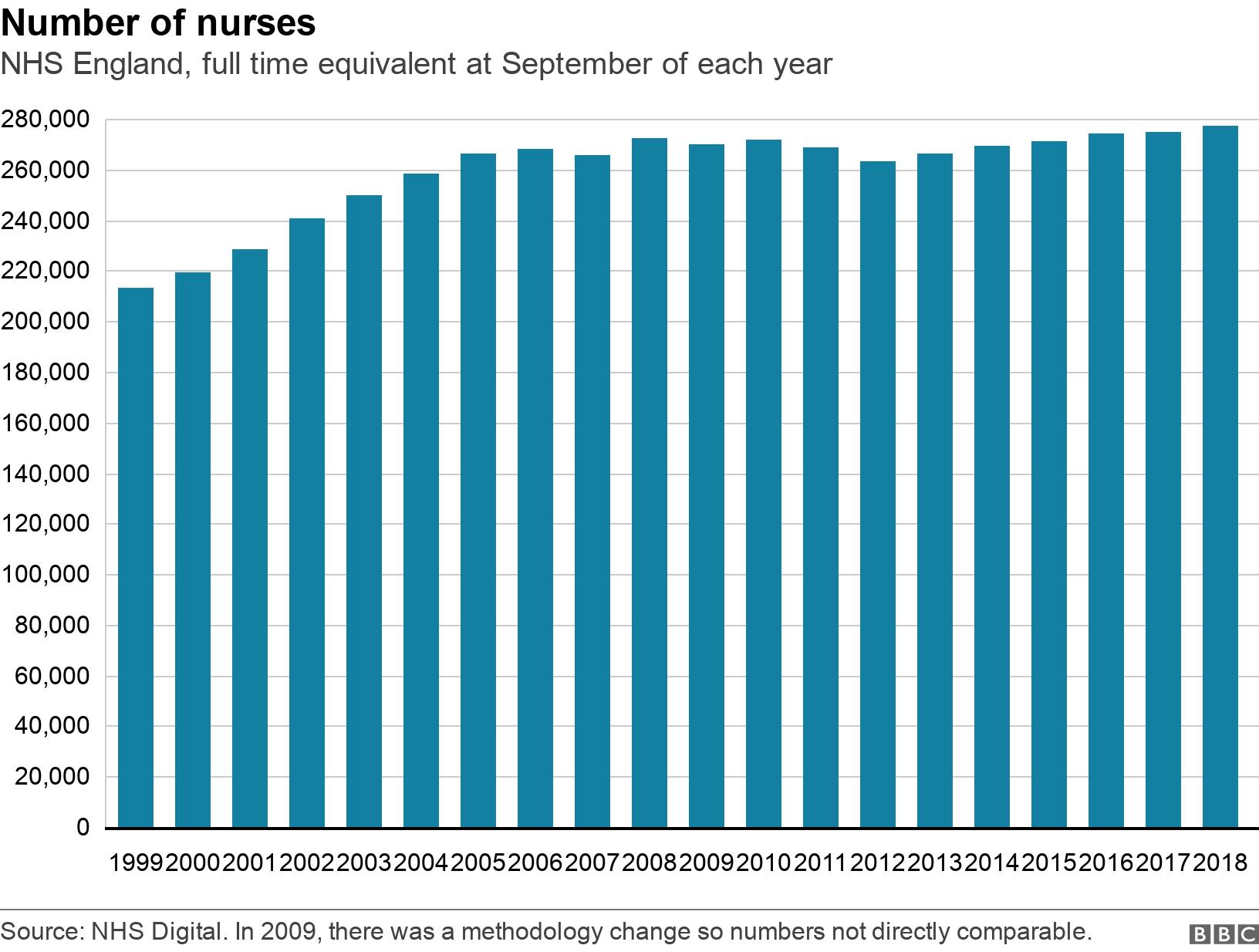 Measured by full-time equivalent posts, there are currently around 280,000 nurses in England.

This does not include the more than 40,000 vacancies for nursing roles. The Conservatives' pledge implies a net increase to around 330,000 by 2024-25 - that is nurses in posts and not including vacancies.

How many new nurses do the Conservatives want to train?

The party says 14,000 more nurses will be trained with extra clinical placements funded in the NHS.

A maintenance grant (scrapped by the Conservative Government in 2017) will be reintroduced. This will range between £5,000 and £8,000, depending on clinical areas with most need for new nurses. But tuition fees for nurses - not levied before 2017, but currently up to £9,250 a year - will not be scrapped.

The party refers to "reducing attrition during the course", in other words persuading more students to finish their training for example by raising the quality of clinical placements.

Another 5,000 more nursing staff will come from apprenticeships which are designed to allow recruits to be trained in the workplace without the need to pay tuition fees and study at university.

Some of these, it is assumed, would be existing nursing associates who would gain additional qualifications. Nursing associates bridge the gap between health and care assistants and registered nurses, who are freed up to focus on more complex clinical care.

But the Nuffield Trust think tank notes that the nurse apprenticeship scheme is relatively new and by the middle of 2018, only 300 people had started.

What about international recruitment?

The Conservatives want to see 12,500 more nurses recruited from overseas.

According to research by the House of Commons library, 16% of nurses in England are non-British nurses. In modern times the NHS has always required international recruitment.

The question is whether the extra 12,500 on top of existing efforts is achievable. The Conservatives argue that halving the cost of visas will help attract more staff from outside the UK.

But the health surcharge (levied to cover a foreign worker's care needs should they arise) will increase under the party's plans.

What is more, EU recruits who currently can work in the UK without any additional cost burden, will have to pay these fees after Brexit.

How will better retention help?

The Conservatives say that 18,500 extra nurses can be found by using policies to ensure fewer leave the NHS.

The aim is to lower the proportion of staff who leave each year, known as the turnover rate. In other words the aim is to ensure that 18,500 nurses who might otherwise have left remain in their jobs.

NHS England is already addressing this issue by promoting more flexible working, enhancing continuing professional development and encouraging highly qualified staff who have left in recent years to return to the NHS.

Internal projections suggest that as many as 20,000 nursing staff who might have otherwise quit could still be working for the NHS in five years' time.

But much will depend on the money allocated in the spending review after the election for public sector pay, a key factor in retaining staff.

What do health experts think?

Both inside the NHS and among independent health commentators there is agreement that around 50,000 more nurses than now will need to be working in the service in five years' time.

The Health Foundation, Nuffield Trust and King's Fund think tanks, in a joint report, argued that 5,000 nurses will have to be recruited annually from overseas over four years to avoid staff shortages even if other initiatives are pursued to boost the workforce such as reintroducing maintenance grants.

That would mean 20,000 more internationally recruited nurses by 2023, considerably more than the Conservative plan.

Training, they argue is essential, but it is not an immediate solution as it takes three years for nurses to qualify. 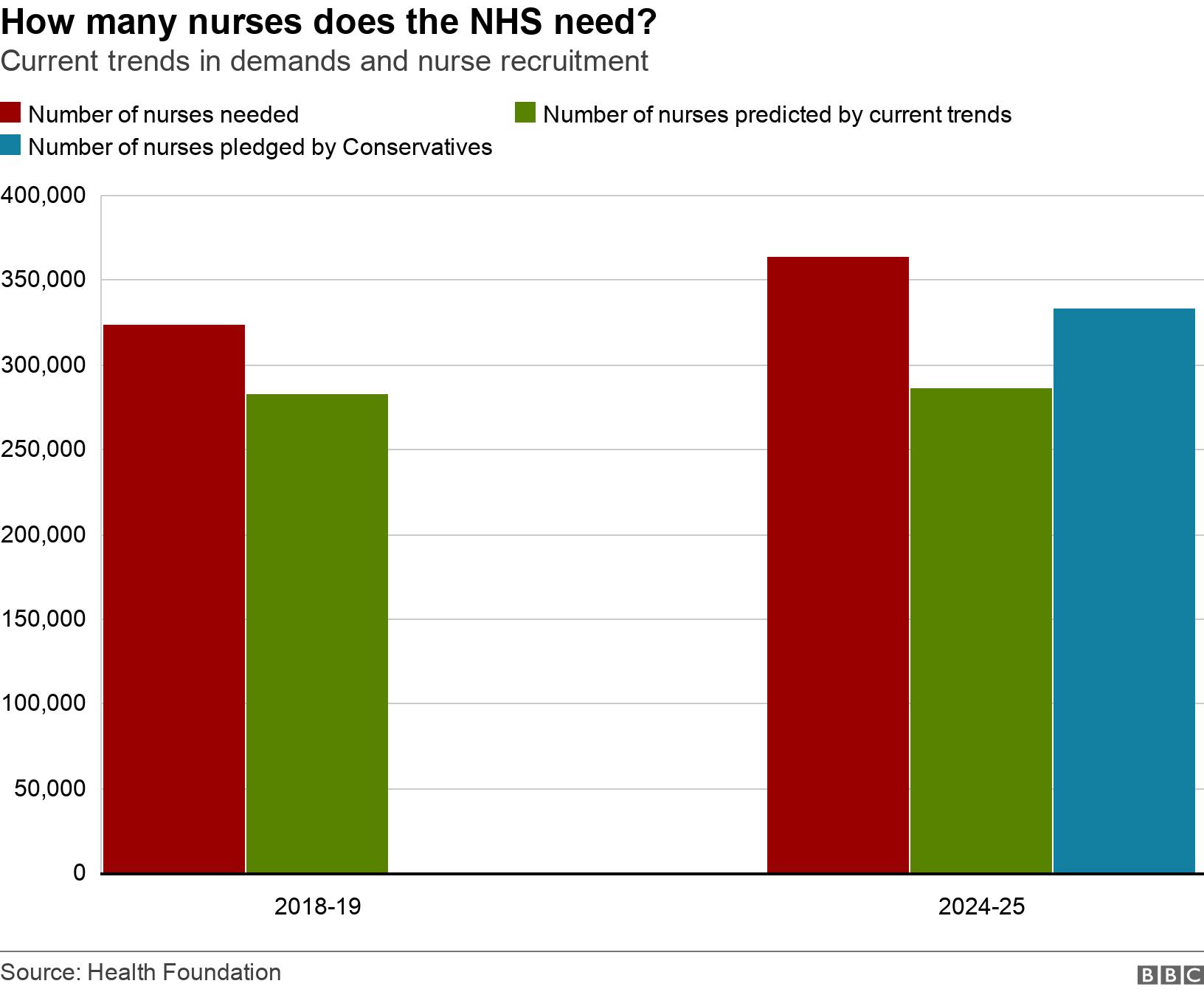 Is there confusion over timing?

Culture Secretary Nicky Morgan, in broadcast interviews, said the party pledge for 50,000 was over 10 years. This caused confusion as there was no specific date in the manifesto.

However, briefing notes issued alongside the document referred to the target being reached by 2024-25, at the end of the next Parliament.

Conservative sources have indicated that Ms Morgan was wrong to refer to 10 years and that the pledge is a five-year one.