Another offering to lift the soul heavenwards from James O'Donnell and his choir.

Another offering to lift the soul heavenwards from James O'Donnell and his choir, as they continue their exploration of liturgical repertoire across the centuries.

Falling forty days after Easter Sunday, the Feast of the Ascension marks the last time Jesus appeared to his disciples as they watched him ascend to heaven. It is the joyful climax of the Easter period, as Christians celebrate Christ's triumph over death, which has made salvation possible for everyone who believes. This CD takes the listener consecutively through what they would hear were they to step into the abbey at any point during that day, whether for Matins, Eucharist, or Evensong.

The first thing that hits you about the singing is the celebratory tone. The boys might be singing Stanford's Caelos ascendit hodie, but they could just as easily be trilling ''Woohoo! It's Ascension Day!'' I love such musical joie de vivre, and not every choir is able to produce it convincingly as these chaps. It doesn't come at the expense of quality, though; this is Westminster Abbey Choir at their crystalline best, with spot-on pitching, enviable articulation and sympathetic phrasing. Matins continues with preces and responses by Bernard Rose, Sir Joseph Barnby's setting of Psalm 24, Heinrich Schutz's upbeat setting of Psalm 100 and Britten’s Festival Te Deum in E, before finishing with Vaughan Williams's ever-popular O clap your hands. It is a stirring, beautifully judged programme of music, performed to the highest standard.

The repertoire for Matins is representative of the whole disc, i.e. mostly late-19th/early-20th century composers, plus a couple of carefully chosen and placed exceptions to the rule, such as the aforementioned Schutz, and the contemporary Viri Galilari, Patrick Gowers' swirling, other-worldly depiction of Christ rising to heaven. William Walton features heavily, with his Missa Brevis at Eucharist, and his 'Chichester Service' Magnificat and Nunc Dimitis at Evensong. Robert Quinney shines as his organ brings the 'day' to a triumphant and virtuosic close with another contemporary work, Francis Pott's Toccata. 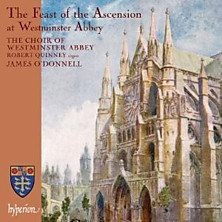