Coldplay A Rush Of Blood To The Head Review

A superb album that might just capture your heart and your imagination. Don't...

Perhaps unsurprisingly, Coldplay's new album A Rush Of Blood To The Head is a consolidated evolution from their comparatively naïve debut, Parachutes. The die-hard Coldplay fans looking for another Parachutes and the bloodthirsty critics who demand to see some progression will all walk away happy.

A Rush of Blood to the Head is inimitably Coldplay; Chris Martin's familiar vocals, the band's signature harmonies, strings and piano are all there but disarmingly there is a lot more to this album. It's undoubtedly the album we all expected but it's also smarter; more poetic, more mature.

"Politik", the album's opener makes for a driving, imposing start with Martin's distinctive vocals reverberating eerily above urgent piano chords. It's unusually dramatic for a band once dubbed by ex-Creation mogul Alan McGee as "Bedwetters". The second track, the first written post-Parachutes and sounding like a refugee from that album, is the grower "In My Place". It's a fantastic pop tune that justifies Coldplay's status as one of UK's most exciting bands.

The haunting, surprisingly cynical theme that originates in "Politik" is continued in "God Put A Smile Upon Your Face" which sees the band at full stretch, lyrically as well as musically. You can sense them pushing themselves to prove to the world that there is a lot more to Coldplay than chart friendly singles.

Then, mid-album, they let all their hard work go to waste with the insipid, vanilla tracks "The Scientist" and "Clocks". They pass you by and fail to raise even the smallest emotion. Daylight" and "A Whisper" find the band back at their best with epic, yet simple melancholic tunes. Here repetitive choruses and hypnotic, violin sounding guitars take the listener on an exciting journey that you wish wouldn't end.

Coldplay are a band very much in touch with their emotions, which frequently works in their favour. Martin's heartfelt, passionate vocals on the piano driven "Warning Sign" transform a song which in other hands could descend to the pathetic: "Come on in, I've got to tell you what a state I'm in...The truth is I miss you"

Despite a couple of weak moments this is asuperb album that might just capture your heart and your imagination. Don't struggle; enjoy a rush of blood to the head. 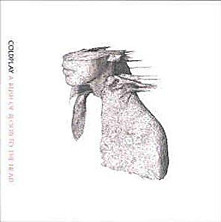