It can be recommended as a solid gold accompaniment to long summer evenings to come.

Hands up who thought that The Shortwave Set's debut, The Debt Collection, was one of the most underrated gems of 2005? Its mixture of vaguely naive delivery, instantly hummable tunes and idiosyncratic electronica seemed to set critics and radio schedulers' ears alight while leaving the public strangely unmoved. Now the trio - two thirds British and one third Swedish - have moved label and got some heavy friends involved and this time around they may have the backing to finally strike gold.

Now that James Brown has departed this world, Brian 'Danger Mouse' Burton is racking up the 'hardest working man in show business' miles. This year alone has seen him helm great works by The Raconteurs, Gnarls Barkely and The Black Keys. But he's gone on record as saying that he regards this band as his faves. Add to this the viola of John Cale and the string arrangements of Van Dyke parks and on paper you'd expect fireworks.

This is all well and good, but the results may leave hardened fans a little disappointed. This isn't to say that Replica Sun Machine won't lodge in your head and warm your heart. It's wonderfully chock-full of sweet tunes and pretty arrangements, but in terms of developement little sets this apart from its predecessor. Yes, the overall production is cleaner, cleverer and fuller of little quirks, but after three years you may be forgiven for expecting something a little more jaw-dropping than this.

But really, this may be a little harsh. The first single, No Social, has a wonderful loungey, loping undertow. Replica has the mark of Cale's drones all over it. It melds the Velvets and Sweden's other greatest export du jour, The Knife, quite wonderfully. Really anyone coming fresh to this band would find oodles to love here. From the string grandeur of Yesterdays To Come to the Air-like twinkles of Sun Machine. The trick of mirroring male/female vocals in octaves on most tracks does get a mite overplayed, but it also compensates for any lack of distinctiveness in either department.

As a consolidation of the strengths of The Debt Collection Replica...works admirably. It can be recommended as a solid gold accompaniment to long summer evenings to come. For the hard core fans, a little more patience may be required. 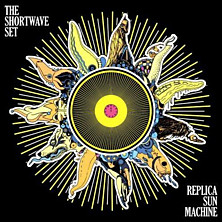