The incomplete ‘incidental music’ for Alceste, conducted with liveliness and sensitivity.

After a century of neglect, many of Handel’s once sensationally popular operas are now an established part of the operatic mainstream. But here is something of a rarity: the incomplete ‘incidental music’ for Alceste.

Conceived as a hugely lavish production, it was possibly Alceste’s overreaching ambition that led to its downfall. A team of top talent was assembled for its creation: Scottish-born playwright Tobias Smollett, impresario John Rich, celebrated set-designer Giovanni Servandoni, Handel's librettist Thomas Morell and, of course, the towering genius composer of the opera world himself. Intended for performance at Covent Garden, the production collapsed soon after rehearsals had begun in 1749. Quite why remains a mystery – but it seems likely that the involvement of too many temperamental cooks spoilt the proverbial broth.

Smollett's play disappeared and remains lost; but, fortunately, Handel's music survives. Indeed, much of it will be familiar to anyone acquainted with the subsequent works into which Handel pragmatically recycled its material – The Choice of Hercules, Belshazzar and Alexander Balus. This new Chandos release offers a welcome chance to appreciate the music of Alceste in its original, never realised, guise.

The classical drama tells of Alceste's self-sacrifice to save her dying husband, King Admetus, and of Hercules' journey to Hades to bring Alceste back to the world of the living. Smollett assigned the principal roles to actors; Handel's arias are sung by secondary characters. Pick of the bunch is the ravishing ‘Gentle Morpheus, son of night’, in which Calliope (goddess of poetry) consoles Admetus, sung with affecting tenderness here by Lucy Crowe to sumptuously lilting accompaniment from the Early Opera Company orchestra under conductor Christian Curnyn.

Occasionally he doesn't get the mood quite right – the wedding celebration chorus ‘O bless, ye pow'rs above’ needs greater rhythmic spring. But, generally, Curnyn's lively and sensitive approach makes a strong case for this little-known score. 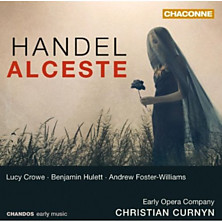