Pack away your superlatives, sir, for they’ve all been said. Such is the legend of Raw Power, The Stooges’ third album, that more column inches have been devoted to it than the combined height of all the individuals who purchased it upon its original February 1973 release (it was widely ignored). Turn it over, again, and hit me with the flip. This record is done.

What’s not, though, are the ripples that continue to expand from its initial point of impact. For this Legacy edition – two discs; a deluxe edition, with additional rarities and a DVD, is also available – they’ve lapped against a recording of the band at Richards in Atlanta, October 1973. Georgia Peaches is the bonus disc in question, and what a ride it offers – Iggy snarling, confrontational, caustic; his band, featuring original Stooges (the late) Ron and Scott Asheton alongside new guitarist James Williamson, frothing itself into a frenzy to keep pace; pianist Scott Thurston painting merry atop the mêlée with attractive abandonment.

The set’s not exclusively comprised of Raw Power cuts – though the album, the subject of much scrutiny from Iggy’s then management, who insisted that David Bowie clean up the street-walkin’ cheetah’s original mixes, was still fresh in the minds of these musicians, already attentions were turning to the future. Cock in My Pocket and Open Up and Bleed are among the numbers that’d emerge on 1974’s live release, Metallic K.O., though neither would receive a studio treatment, as the band fractured again in 1974 and did not reconvene ‘til 2003, eventually releasing The Weirdness in 2007.

The quality of Georgia Peaches is expectedly sketchy – but such is the energy conveyed that it’s tough indeed to not become caught up in the crackly cacophony. Thurston tinkles playfully during an intro otherwise dominated by fuzzed-up crunch from Williamson; then, like a bolt of lightning against an ominous sky, Iggy sparks into brilliant life, stretching syllables against their will and catching the shortest breath whenever a break presents itself. His vocals distort and pop, his mouth too close to the microphone one moment and utterly absent the next. But consistency isn’t the name of this game: Stooges shows were about cutting loose, feeling free, fighting the tide, butting heads. Iggy threatened his audience with a smirk – “Come up here, little Billy Boy… Suck my a**”. Should an actual fight break out, so be it.

After all, Raw Power is one superb soundtrack for a scrap. 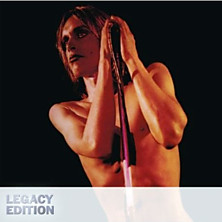