Sheffield crooner turns up the amps.

After a decade of seducing career couples with the Roy Orbison stylings of several critically acclaimed and, latterly, commercially successful albums, Sheffield’s most unlikely pop star is back, and this time he’s rocking out.

It shouldn’t be a shock: Hawley started out in indie band the Longpigs, has worked with Pulp and Robbie Williams, and even contributed the guitar solo to All Saints’ version of Red Hot Chili Peppers’ Under the Bridge. But to those accustomed to 2009’s Truelove’s Gutter, it may be a little bit unexpected. Standing at the Sky’s Edge is the sound of Hawley cutting loose, and clearly enjoying it.

He breaks us in gently: She Brings the Sunlight opens with understated sitars and strings before launching into a lumbering assault of distortion and Eastern-tinged drones. Its solos might inspire bouts of air guitar from older members of his audience, but Hawley’s hardly guilty of overindulgence, even when the opening lines of the record’s title track strangely recall Bon Jovi’s Wanted Dead or Alive.

Such eccentricities are fortunately balanced well by his trademark old-school reverb, a steadily growing wall of guitars, and a pace that matches the desolate subject matter: the tale of three doomed individuals with strangely biblical names (Mary, Joseph and Jacob).

Elsewhere he works up a sweat on Down in the Woods, which reduces rock‘n’roll – a subject in which Hawley is well versed – down to its simplest elements, much as Spiritualized have done, though at a pace they rarely reach.

Recent single Leave Your Body Behind You, meanwhile, is both a meditation on the transitory nature of human life and an almost celebratory plea to adopt the spirit of carpe diem, toning down some of the album’s more psychedelic tendencies in favour of the uplifting sounds of an adult choir.

But Seek It’s tenderness will be familiar to long-term fans, The Wood Collier’s Grave is a moody exercise in mournful nostalgia, and Don’t Stare at the Sun offers one of the most memorable melodies he’s written so far.

He saves the best until last, however: Before begins with another three minutes of dreamy introspection before Hawley’s guitars win out once more, securing his status as guitar hero before slipping back into one last passage of shimmering, peaceful beauty.

The men are going to love it. But the women will still love Richard Hawley, too. 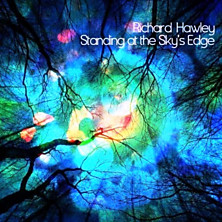