The album remains a perfect example of their baroque and roll.

This album is aBBC 6 Music album of the day.

Fate was on the band’s side. The tracks laid down in May’s absence had a sparseness that he could finally embellish to his full satisfaction (ie: LOADS). Also, ironically, the band was forced to dig into their back catalogue to come up with material. Both Mercury and May put forward future classics that had been numbers with their old bands: May’s “Brighton Rock” (formerly a Smile song called “Blag”) and Mercury’s “Stone Cold Crazy” (from his old band Wreckage). The latter presaged speed metal by years, eventually being covered by Metallica.

By this time the band had honed their Zeppelin-meets-Hendrix-in-Biba sound to perfection. Mercury’s “Lily Of The Valley” retains the same campness that blighted their previous work but “Killer Queen” was three minutes of romping pop perfection. May was now the master of the delay pedal (“Brighton Rock” was a future live guitar marathon showcase) Most importantly this was a band with new experiences and maturity to draw on. May’s “Now I’m Here” details their touring experiences with Mott while Mercury turned in one of his patent character assassinations with “Flick Of The Wrist”. It was also a truly group effort. Both Taylor and Deacon debuted songs on SHA. Taylor’s “Tenement Funster” is pure cod-rock nonsense but his stratospheric vocals and Bonham-esque drumming were now an integral part of the Queen sound. Deacon showed how his grasp of pop dynamics on the brief “Misfire” would lead to him writing some of the band’s most enduring hits.

In anticipation of their next album, they stretched contemporary production methods to their very limit with multi-layered vocals and guitars and Freddie’s vaudevillian streak finally emerged (“Bring Back That Leroy Brown”). This was the album that finally saw Queen find their true voice(s). Ending with the louche, grandiose ''In The Lap Of The Gods…Revisited'', the album remains a perfect example of their baroque and roll. 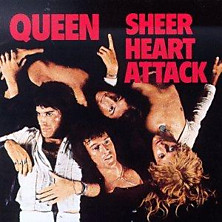