One of the defining artistic statements of the civil rights movement gets a timely...

The cover of the Freedom Now Suite is a simple black and white grainy photo of three black men sitting at the counter of an American diner. They stare the camera down while the white waiter behind the counter seems nervous.

So what? Just three black guys in a café. But in 1960 when this album was first released there were too many people in the United States who would have seen this image as an outrage, as provocative, as contrary to God’s law. A white man serving black men? Impossible.

Max Roach was one of the most widely respected drummers in jazz. He died recently at the age of 83. My hunch and hope is that the record he was most proud of in his long career was this one.

Roach was active in the civil rights movement in the US throughout his life and the Freedom Now Suite is a musical history lesson. It starts with the sombre, shocking slave chant of “Driva’ Man” which takes you right into the heart of oppression, and ends back in Africa with “Tears For Johannesburg”.

Just for its subject matter everyone in the world should be forced to listen to this album at least once. There is some fine playing, like Booker Little’s trumpet solo on “Freedom Day”. But it’s not an easy listen, the mood is unsurprisingly sombre throughout, and it suffers from very basic recording and production.

Although this is Roach’s labour of love, musically it’s a partnership. Roach’s drumming stands side by side with the vocals of his wife to be Abbey Lincoln whose singing bookends every track. The highlight is the extraordinary “Triptych: Prayer/Protest/Piece”, where Roach and Lincoln improvise together, alone. Lincoln whispers, wails, moans, and screams while Roach caresses, then pummels his kit. It’s absolutely electrifying.

Abbey Lincoln’s Straight Ahead was released a year later and features Roach and many of the same musicians as Freedom Now. Her voice is powerful, rich and strong. Each track is good on its own but all of them share the same, mid to slow tempo, and the production hasn’t got any better. The highlight is a lovely version of “Blue Monk”.

In the past forty years the word 'freedom' has been chewed up, spat out, kicked around and used to justify pretty much anything. We Insist! takes you back to a time when it actually meant something. 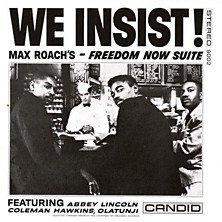