Hearing Mark E. Smith shout over a rumbling beat is one of life's singular pleasures.

Hearing Mark E. Smith shout over a rumbling beat is one of life's singular pleasures. He drawls like Johnny Cash after too many pints.

A new team of young whippersnappers have been chosen to form the latest incarnation of The Fall. Honed into a brutal, head banging rock beast they do a great Bo Diddley and thrash their way through an acid scrambled version of The Move's "I Can Hear The Grass Grow".

Smith filters dark thoughts through the broken prism of his brain. He chides those who spread "lies and discontent" on the lopsided "Ride Away" before singing "Hey, Hey". It's funny, but I'm not sure why. "What About Us" tells the story of an East German rabbit who moves to the North of England and gets annoyed about Harold Shipman.

By his own high standards Smith's performances here are erratic. Sometimes he's as sharp as a needle, sometimes he's incomprehensible.

But "Ya Wanner" and "Clasp Hands" are classic Fall: driving riffs with Smith's lyrical gems smeared on top. When they're this good, there's no one within shouting distance. 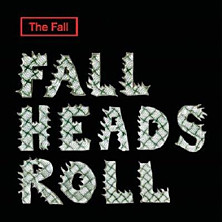