The catalyst of creation located in the power of psychic persuasion.

Telepathic roots bloom the strangest fruits and Matmos’ latest yield – even for a duo well versed in the amplified neural activity of crayfish and samples of cosmetic surgical procedure – ranks right up there with their most oddball of audio stunts.

The past four years have seen partners Drew Daniel and MC Schmidt hit the lab to conduct their own unique take on the Ganzfeld (“total field”) experiment, used to check participants for extrasensory perception (ESP).

Attempting to communicate the concept of their new record directly into the minds of their subjects, Daniel would solicit responses from the sensory-deprived participants who would then describe aloud any images or sounds that formed within their consciousness.

The results became the inspiration behind these nine electronic pop perversities, awash with psychic chicanery and skittering algorithmic beats.

Cute compositional stratagems aside, The Marriage of True Minds heralds a return to form after the disappointing synth-heavy excesses of 2008’s Supreme Balloon. Where that album over-extended a limited palette, this set bridles with impish imagination.

Coil’s playful eccentricity is again, as it was on 2006’s The Rose Has Teeth in the Mouth of a Beast, a discernible and welcome influence.

Very Large Green Triangles (resurrected as an extended version from 2012’s Ganzfeld EP) sounds like an off-cut from Love’s Secret Domain as remixed by These New Puritans, with the psychic ruminations of screwy crooner Ed Schrader as a substitute for John Balance’s lurid incantations.

Triangles were evidently a recurring image throughout Matmos’ experimental research sessions. Expositions regarding their repeated visitations appear large In Search of a Lost Faculty.

That this strange and fascinating collection ends with a perverse take on Buzzcocks’ ESP seems an atypically obvious move for these perennial pranksters. But this version straddles the uneasy void between feral black metal and hoary surf instrumental.

That’s much more Matmos. And, like everything else here, it works: a testament not just to the power of thought, but also a tribute to the second sight of its creators. 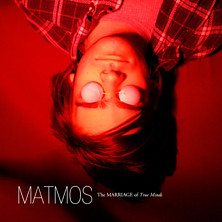