'With the help of a major label budget the band has finally been able to fully...

Daara J are the third member in the holy trinity of Senegalese hip hop and have, alongside Positive Black Soul and Pee Froiss, played a major role in defining the contemporary sound of Sene-rap. From passionate hip hop heads to star gazing females everybody in Senegal has always loved them. It ended to prefer the more rugged sounds of their competitors to Daara J's melodic mixture of rap, reggae and soul, but the latest release has drawn me firmly into their camp.

With the help of amajor label budget the band has finally been able to fully consolidate the tentative ideas of their previous albums, and create their most mature record to date. "Boomrang" toys with the musical formulae of hip hop, ragga, R&B, and Cuban music, respecting the rules of all the genres, while escaping the boundaries of them. The opening title track celebrates hip-hop's homecoming to the African motherland (born in Africa, brought up in America, rap has come full circle) in rapid Wolof rhymes and airy Malian melodies by Rokia Traoré.

The rest of the album takes lyrical and musical excursions that spin out several subplots to this overall theme. "Esperanza" is a Senegalese-Cuban anthem beautifully arranged by Sergent Garcia, the quirky visionary of Cuban music. "Number One" puts an African twist on roots reggae, while "Paris Dakar" (featuring French MC Disiz la Peste) and "Magg Dan" stay closest to the hip hop conventions which inspired the creation of Daara J in the first place. The only track to skip is perhaps the sickly sweet hymn to hip hop "Hip Hop Civilization", which is too generically soppy for even the most hardened R&B fans.

Overall, "Boomrang" is a successful sonic adventure which thrives on its defiance of the margins of established sales categories. Is it hip hop? Almost everything passes under the label these days and this most certainly does, even though it doesn't carry a parental advisory sticker. It's a confident new voice of Senegal's generation of cooland is a must-buy for lovers of world music and hip hop alike. 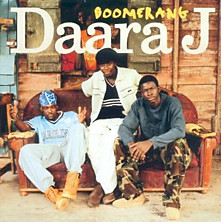