Chart-toppers in the US, the country-rock duo now look to break the UK.

Already certified platinum in the States, where it’s their third number one album, this is the first Sugarland release to test the UK waters. It may lose something in translation – booming country-rock anthems don’t always seduce the Brits, as Lady Antebellum might testify – but there’s no denying its aura of confidence and gleaming, slick production values. It remains to be seen whether the duo’s perma-grins will prove to be charm or cheese here.

So far their career has lived up to the album’s title, with Grammy wins galore. From the opening chimes of All We Are – a thinly-veiled rewrite of U2’s I Still Haven’t Found What I’m Looking For – to the chorus of Tonight (more Pat Benatar than Katy Perry), it’s clear they’re shooting for the demographic that made Shania Twain massive. Singer Jennifer Nettles is alternately perky (a trait emphasised by her facial likeness to Anthea Turner) or mock-tragic. Cohort-muso Kristian Bush plays the Dave-Stewart-in-Eurythmics role, although he looks more like the late Maurice Gibb. Nettles – evidently America’s new sweetheart – does lots of wipe-clean sex and unsweaty air-punching, priming herself for that never-ending stadium tour. Piano ballad Shine a Light provides respite from all the we-can-overcome power-chord triumph, while phrases like "use your voice" pitch themselves as stirring messages of empowerment.

They may stand or fall here on the crossover hit Stuck Like Glue, a chirpy, catchy mid-tempo ditty which Gabriella Cilmi would kill for. Its tone – all pink puppies and suburban smiles – will either grate or disarm and conquer. Its midway break into cod-reggae is genuinely surprising. As on every track, Nettles sings with the swagger of an alpha head girl who just knows the adoration of a loyal universe is her birthright. There must be a million Sugarland wannabe duos rehearsing right now for their big break on American Idol.

Somewhat bewilderingly, Bush has compared the pair to The Clash, but even that overrated punk band never did anything this targeted and polished. Ultimately you have to admire the precision tooling, the cunningly-gauged parallel levels of bigness and blandness, the ruthlessness – the only-too-plausible machine. 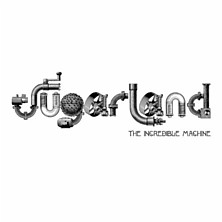