First, the consumer information. Diehard fans of the Swedish synth-pop veteran who have been waiting for the third part in a 2010 Body Talk trilogy may be disappointed. Body Talk contains five new tracks plus five songs from each of the previously released parts one and two; of those five new tracks, two are different versions of previously released cuts. So the third part of the trilogy is, in fact, a three-track single. You can download the five newbies as Body Talk Part 3; but then, you can download any five tracks from any album, in theory. Ms Carlsson’s frothy press release quote about breaking "a world record in how many songs I could release in a year" happily ignores the fact that the running time of all three Body Talks barely adds up to a double-album.

But enough carping. It’s tough to stand out in the deluge of new music these days, even when you’re fabulous. And Robyn is fabulous, a perfect cross between winsome perennial teen pop in a Kylie mode and the kind of dirty post-modern noise you’ll hear in a hip electro club. So she can be forgiven for finding a gimmicky way of drawing attention to music which should be on heavy rotation on daytime radio – even the less fantastic songs here would be number ones if they had Cheryl Cole printed on the label.

Body Talk is dominated by pretty Klaus Åhlund-co-produced pop nuggets beefed up by synth-disco beats in the Giorgio Moroder tradition. There are guest spots from Snoop Dogg (the grungey drum ‘n’ bass of U Should Know Better), Röyksopp (the gorgeous fake-Jamaicanisms of None Of Dem), Kleerup, Diplo and Robyn’s first producer Max Martin. But its Åhlund and Carlsson’s adventures in edgy 80s futurism – Fembot, Don’t F***king Tell Me What to Do and the astonishing sci-fi art-throb of We Dance to the Beat – that hit hardest. It’s here that Robyn defiantly and heroically falls between commercial stools – too poppy for the critics, too melodic for club DJs; too bitchy, funny and weird for the mainstream.

The part of the ‘trilogy’ where this maverick excellence truly surfaces is the short (32 minutes), sharp and eclectic second part. But Body Talk still does more than enough to stand as the first genuinely exciting, no-filler, pure pop full-length album since Lady Gaga’s The Fame. And not a fright-wig in sight. 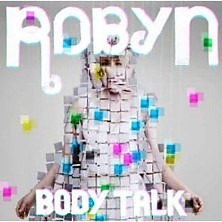